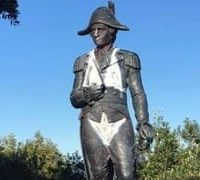 All art crime news is off beat in Aotearoa

I tend to spend a fair bit of time in New Zealand. It is a beautiful place filled with family, friends, and comfort. It is the closest bit of land to the antipode of Scotland, meaning it is as far away from home as I can be, and I love working from there: because of the perfect time difference I get my rush of emails in the NZ morning, respond to them, and don’t have to respond to responses until the next day, giving me uninterrupted time for thinking and writing. Having missed my usual full December in New Zealand this year, I’m eyeing April for a return. Then probably December again to get back to normal.

I pay attention to Kiwi art news and, in particular, Kiwi art crime news. Over the past few years I’ve noticed a pattern. Art crime in New Zealand is…quirky. Yes, okay, maybe everything is a bit quirky in New Zealand, hence the appeal: I’ve been to the toothbrush fence and the Helen Clark Celebrity Bus Shelter, and remember, fondly, the day that Shrek the Sheep, whose mortal remains are in Te Papa, the national museum, was shorn on an iceberg…may he rest in peace. Yet it seems every time I log an art crime story from NZ into CultureCrime.org, it has a little something extra, a piece of flair, a quirk. Here are some of my favourites from recent years.

This morning’s story. A 2-metre-high gnome sculpture priced at $55,000 NZD was stolen from an Auckland art gallery on Christmas. The gnome, which who was wearing a little Santa hat atop his gnome hat for obvious reasons, was on display outside the gallery and, clearly, the two men in high-viz caught in the CC-TV footage taking it couldn’t resist. Thankfully, on 15 January, the gnome statue was found on the doorstep of a Salvation Army charity shop in the Glen Eden area of Auckland, fairly far from where he started. A note affixed to the gnome’s hat read “Please return to Gow Langsford Gallery”. Sadly the gnome will have to go on display inside the gallery and the dealers are now going to carefully consider which works they display outside.

In the closing days of 2015, a “lady in a campervan” (which seems like a very usual place for New Zealanders to be) noticed some kids climbing up a replica of a Rapa Nui/Easter Island Moai/giant head. Apparently about 5 or so of the youths pushed the statue over and left it there with a huge and, dare I say, picturesque crack. The campervan lady called the police. Turns out this wasn’t just any Moai replica, this one was a gift given by the president of Chile in 2004 to symbolise pan-Polynesian culture and so on.

As luck would have it, I was in Wellington on that day and just happened to be driving through Lyall Bay with my family, on the way to meet Prof. Simon Mackenzie for lunch. We stopped at the broken statue to investigate which, I assure you, was totally professional and entirely work-related. See blog post. The quirk here is the visual: the surreal separation of a Moai into two pieces with the sea peeking through.

Q: What is art? A: A taxidermy bat inside a green stained glass coffin. The disappearance of part of Rachel Beckett’s Batty for You represents the first theft experienced by the Arts Village in touristy Rotorua. Of more interest than the theft itself is the artwork. Beckett told the interested press that she had the bats anyway and thought why not make coffins for them? She also, I am very glad to say, knows the provenance of her preserved bats: they are from Indonesia, were killed as pest control, and were legally imported with permission from the Department of Conservation.

Len Lye sculpture worth $300,000 broken in pieces by would-be daredevil

On a beautiful October day in 2018, Wellingtonian Hunter Macdonald was “bored out of [his] mind” and felt the urge to do “some sort of gymnastic, acrobatic stuff”. Unluckily, “Water Whirler” by renowned kinetic sculptor Len Lye caught his gaze. Macdonald climbed up, presumably bounced a bit, and the sculpture broke, dumping him into the rocks and water. The sculpture, which was undergoing repairs at the time, had cost the city over $1mil NZD and Wellington’s mayor noted that repairs will be covered by insurance. Because we can’t have nice things, the pier the sculpture is on may be closed to the public.

So what happened to Macdonald? He was charged with intentional damage for his “pretty public display of stupidity” (to quote May Justin Lester). Macdonald pleaded guilty to the charge and sentencing is yet to come.

by Jonathan Pearlman, The Telegraph (2 October 2018)

So there is very little “quirky” about a statue protest and removal. Anti-Cook fits in to global discourses on the memorialisation of figures of conquest, genocide, domination, and injustice. It makes perfect sense that this Cook statue would be constantly defaced (once painted with a white bikini on it) and would need to eventually be removed. Why is this on my list?

So it is meant to be Captain Cook, but there are issues. You see the statue was made in Sydney in the 1880s and ended up at the Captain Cook Brewery in Auckland. The Brewery donated it to Gisborne, the town that now sits in the spot where Cook first landed on NZ soil, and it was installed as a Cook likeness. Problem is the statue isn’t wearing the uniform of the Royal Navy. It’s either sorta an Italian Navy uniform or just a made up thing. The face is OK, but the rest, who knows. Down pseudo-Cook comes!

In the 19th century, Bohemian artist Gottfried Lindauer moved to New Zealand and proceeded to paint a spectacular collection of portraits of Māori people. Fairly far from exotica (for the most part), Lindauer was working for the people he painted, commissioned by them to paint likenesses that emphasised aspects of the self that were important to them. They are GREAT. I love them.

Because Lindauer portraits are unique representations of 19th century Māori ancestors, New Zealand collectively considers paintings by Lindauer to be worthy of acquisition. When they appear on the market, they are seriously considered for purchase. To say it another way, the various heritage and museum outlets of New Zealand have a standing order for Lindauer Māori portraits. They are a ready and willing market that will spend for what they want, and sometimes what they want is too good to be true.

Thus in 2013, the Alexander Turnbull Library spent $75,000 on a portrait of someone named Hoani or Hamiora Maioha that was signed “G. Lindauer”. It was not a Lindauer. It was a fake. Funny thing is that this particular Lindauer fake had been making the market rounds for a little while with most Colonial Art experts giving it the thumbs down. I had heard about it somewhere or other even and, really, I am NOT that well connected. Before the Library bought the painting, it was warned by several experts that it was suspect, however the library bought it anyway. By 2014 a conservator named Sarah Hillary detected titanium dioxide in the painting meaning not a Lindauer.

The paper provenance placed the painting in the Hawkes Bay area in the 1970s, no further back. Also, *presumably*, no one knew who Hoani/Hamiora Maioha was and no one bothered to confront that issue. You see whakapapa, genealogy and the recitation of lines of ancestors, is such an important part of Māori identity that I know about it: Wikipedia uses the words “fundamental principle”. If no one can whakapapa back to Hoani/Hamiora Maioha, your painting provenance is bunk. Lindauer Māori portraits are a rare chance for us to get double provenance, written and oral, but nope. That’s $75,000 down the drain that could have been saved by listening to both Māori and Art History experts.

I should mention that in 2012 it was reported that Trust Waikato bought a fake Lindauer for $121,000, this one of Tainui chief Kewene Te Haho. It also had terrible provenance but was exactly what the charitable trust buyer wanted…

Dark-Web Shoppers Are Bidding $350,000 in Bitcoin for a Stolen Painting—and It’s Likely a Fake

It was already strange enough that two authentic Lindauers were stolen from an Auckland art gallery in 2017 after thieves weakened the front window glass, rammed the building with a truck, and sped off with the Māori portraits, labelled Chief and Chieftainess Ngatai-Raure. It is stranger still that despite CCTV footage and the complete unsellability of the paintings, no one has been arrested nor have the paintings surfaced. Everything flew out the window and into absurdity when the portrait of the Chief appeared on the Dark Web…yours for £500,000 in bitcoin.

To be clear, the Lindauer was not for sale on the dark web. It was a totally fake posting. The frame was photoshopped onto a preexisting photo of the work. But stolen art for sale on the dark web rings of truthiness: it seems so true that is must be true. Doesn’t matter that there’s no proof that art and artefacts are illicitly traded via onion link auctions alongside drugs and guns and hitmen and so on, they feel like they should be. Thus this totally fake auction of a stolen Lindauer made international news and all the major outlets carried the story.

‘Loveable rogue’ as colourful as his forgeries

I want to round out the New Zealand art crime quirk party with a favourite. Charles Frederick Goldie painted numerous portraits of Māori New Zealanders about a generation after Lindauer under the name C. F. Goldie. Though they are much more “dying racey” than the Lindauer works and, thus, aren’t really as appealing to me, they are valued in New Zealand as National Heritage and as images of ancestors.

In the 1980s a man named Karl Sim was arrested for faking C. F. Goldie works. He responded by legally changing his name to Carl Feoder Goldie, so C. F. Goldie, making his signature on Goldie-style paintings accurate, if misleading. The New Zealand public loved it, with his sentence matching public sentiment:

“He was convicted on 40 counts, fined $1000, and ordered to paint the Foxton Town Hall and public toilets as part of 200 hours’ community service”

Everyone loves a scamp and it seems Goldie the younger was much better off as a known forger than an unknown one.

What’s next, New Zealand? I’m ready for it.