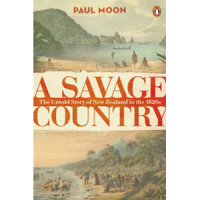 The sale of preserved human heads for the European curio market in context.

A Savage Country: The Untold Story of New Zealand in the 1820s by Paul Moon
2012, Penguin 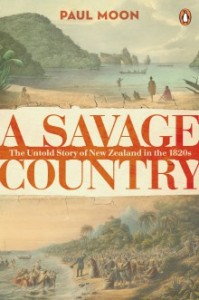 In Moby-Dick (1851), we are introduced to Queequeg, the tattooed Polynesian prince turned harpooner, in a tavern on a cold night in New Bedford. He has been out late trying to flog preserved and tattooed human heads from New Zealand, specifically his last and worst one. It had a hole in it. We’re told that he hasn’t had much luck at this enterprise. The market is saturated. There are enough preserved heads from New Zealand to satisfy demand. They are nothing new in the whaling town.

The scene is fun and comic, but it reveals a lot about something many of us know very little about. The Māori preserved human heads. White sailors and whalers acquired them. Those guys sold them on. There was a market for the heads. That market was saturated by 1851. That is all very strange, disturbing and curious. I turned to Paul Moon’s A Savage Country to find out more.

A Savage Country focuses on one decade in the history of New Zealand: the 1820s. It is an important and devastating time. The British, or at least their entrepreneurs and their missionaries, are starting to get serious about the distant landmass. Back and forth traffic from Australia is increasing during this time and some folks are making sounds about incorporating New Zealand into the Empire. The Māori in many parts of the country are tumbling head first into war. Groups in the north have guns now and as they settle old scores, groups with less access to European weaponry are being scattered and annihilated. It was during this time that the Motunui Panels, looted and smuggled and recently returned, were hidden by their owners as they fled the conflict. No one, not the Māori, not the British, knew what the outcome of all of this would be.

It is around this time that tattooed heads such as those Queequeg was peddling become a hot commodity. *The* curio to have in an era of curios.

To back up a little and to grossly truncate some complicated Māori cultural practices: in the past and now again in the present, Māori men and women would use tattoo to represent all sorts of aspects of their identity. Facial tattoo in particular was equated with who an individual was and where they came from: the tattoos were who they were, they were their face and a representation of self. On men, their whole faces might be tattooed. Most women had tattooing only on their lips and chin. Because of this distinctness, there was motivation to preserve the heads of the dead as they would be identifiable. Heads of enemies were preserved as were heads of revered leaders. They were kept, ritually traded, and so on. They were important.

How were the heads preserved? According to Moon, who cites period sources, the steps were, more or less:

Heads of revered individuals are called Toi Moko. Heads of servants are called Mokomokai (Moon makes no distinction in his book but there is a difference between the two).

To Māori, this was all pretty normal. It’s what you did. To the British, ever excited by the grotesque, the preserved heads were super weird and thus were super must-haves. By the 1820s this was a set thing. Europeans were trading for heads, Māori were selling them, and people were being scandalised by it on the streets of Sydney.

I warn that Moon’s book isn’t only about the Toi Moko trade. Really, that bit is only just one chapter, but I contend that you can’t really understand the market for tattooed human heads without delving into the social matrix that the marketplace is embedded in. Indeed, only through looking at the wider picture can we begin to explore the most disturbing lingering question about the head trade: why would the Maori sell them in the first place?

This is where Moon’s portrayal of 1820s social upheaval is vital. Think of it this way. They head of a slave or enemy captive may have held a certain value and that value may have been in culturally accepted forms of trade and return…and shame. The Europeans may have just walked in to that. Furthermore, European trade items, particularly guns, were of paramount concern to Māori groups who were preparing to fight and defend. Very important cultural items were on the trade table when a gun was an option and the enemy is preparing to attack. Finally there is the possibility of entrepreneurship: the creation of preserved heads that may not have been otherwise created to feed market demand. In other words, the possibility that a head being traded isn’t a culturally significant head, it is a market head. A tourist head.

But as seen in Moby-Dick, the head trade died down. It may have been some degree of market saturation, but what Moon’s book drives home is that changes within New Zealand were probably the driving force. I’ve read some reports that facial tattooing started to wane among younger Māori who were concerned about the possibility of their heads becoming market items. I’m not sure I believe this story. Rather, it seems more likely that in later decades, decades not in Moon’s book, the taking and making of heads was pushed out of Māori culture. Like other Māori practices that challenged European morality, preserved heads were not going to be allowed to continue in an increasingly British world. The seeds of that are clear in the 1820s.

Alas, that meant that there were quite a large number of Māori heads floating around the market for over a century. They tumbled into museum collections, some of which stubbornly insist on keeping them. Which is horrible. Honestly, it is horrible. Others continued to be bought and sold. The last Māori head offered at a ‘classy’ auction house was in the 1980s. Seriously, at Bonhams in 1988, you could have bought a Maori preserved head that failed to sell at Sotheby’s in 1980. Actually, no, that one was removed from sale, but still both auction houses tried to sell a human head and recently. That head was returned to New Zealand.

I chose to read A Savage Country because I spent the past month in New Zealand, which I do from time to time. I learned a lot from it and I am glad I read it. When I finished it I instantly bought two more of his books. I absolutely recommend this book, with the caveat that it isn’t all about the trade in Mokomokai. Context is key.