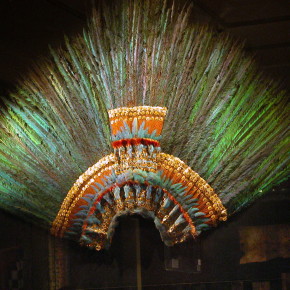 “Indiana Jones would be considered a looter”: Why we’re obsessed with glamorizing archaeologists
(9 November 2014, Salon)
Maybe not quite a looter…

Debate rages about rights of museums to resist claims on artefacts made by the countries of origin
(15 November 2014, South China Morning Post)
It sure does. More Cuno stuff.

Grocer nabbed with suspected antiquities (Egypt)
(11 November 2014, IOL News)
Allegedly was transporting them in food packaging in his car.

Egyptian court sentences 9 people to prison for antiquities’ theft
(11 November 2014, CTV News)
This is for the Khufu Pyramid artefact theft case. The three Germans were tried in absentia. Special treat, one of the Germans is described in press as an “experimental archaeologist”.

Robbery at Ankara museum revealed by witness
(12 November 2014, Hurriyet Daily News)
Three out of 18 suspects arrested for last year’s theft of 302 pieces from the State Museum of Painting and Sculpture.

Gang caught looting temple opens fire on police (India)
(9 November 2014, Times of India)
Police caught the group robbing a temple in Ajmer and the gang opened fire. One of the robbers was caught. The men were found to be stealing idols. There have been several idol thefts in the city in the last three years.

Gurlitt Art Trove Taskforce To Miss Restitution Deadline (Germany)
(11 November 2014, Artlyst)
The Culture Ministry of Bavaria says they won’t be able to stick to the time table set out to discover the heirs of the Gurlitt hoard.

Heirs to Nazi-looted paintings pledge return to owners
(13 November 2014, Times of Israel)
Now if the Bern museums happened to want to NOT take the Gurlitt stuff, his relatives say that they would return the stuff to its rightful heirs.

Art Collective Sues German Politicians Over Theft Accusations
(13 November 2014, ArtNet)
They ‘stole’ a memorial to those who died crossing from East to West Germany and placed it on the EU border. Which I think we can all agree is a pretty awesome thing and in the spirit of the original piece and the actions that it memorialized. Of course the government, never one to want to be criticized effectively via art, called it shameful. The collective hit the politicians with a defamation suit.

Preying on Italian Churches
(12 November 2014, Art News)
Much like in other locations, sacred art theft is happening in Italy. I don’t think theft from churches gets enough press.

Ethically questionable AIA St Louis Maya vessel sells for well over 2x estimate at Bonhams
(13 November 2014, Property of an Anonymous Swiss Collector)
Where I lament the loss of two archaeologically excavated pieces and suggest that whoever paid $21k for one should join the ranks of the St Louis AIA and Bonhams: folks who should be ashamed of themselves.

Mexico Claims U.S. Auction House Sold Stolen, Fake Artifacts
(12 November 2014, NPR)
And in the same auction, Mexico steps in to cast doubt on the authenticity of many of the pieces for sale. I too have my doubts about that stuff. Really, buying them is foolish on many levels.

A symbol of Mexico’s pre-colonial grandeur fades out of sight
(14 November 2014, Fox News Latino)
Where should ‘Montezuma’s headdress’ be? Probably not in a closed museum in Vienna.

Patrimonio: cuando la Historia se queda sin sus bienes (Patrimony: when History loses it’s treasures; Argentina)
(9 November 2014, Clarin)
Even if you don’t read Spanish, translate this one. It is a good overview of what all is going on in Argentina.

U.S. Museum Sends Artifacts Home to Peru
(11 November 2014, Archaeology)
Good for the Burke Museum of Natural History and Culture. The issues with these items came up while inventorying Native American remains for NAGPRA compliance. The Museum found they had remains from Peru, decided to send those back, AND send artefacts back as well. Other museums: do this.

Authorities search for man accused of stealing arrowheads (USA)
(11 November 2014, WALB)
No word on where the collector this guy stole them from GOT the arrowheads…

Norton Simon asks Supreme Court to let it keep ‘Adam’ and ‘Eve’ (USA)
(13 November 2014, Los Angeles Times)
Oh the poor Norton Simon, losing all its art. Perhaps Simon shouldn’t have, you know, not bought the spoils of a number of different genocides and this wouldn’t be happening. You’ll find I don’t have a lot of sympathy.

Historic weapon recovered in Boston: 1600s swivel gun to go back to Italy
(16 November 2014, Boston Globe)
Think illicit antiquities have to be ‘portable’? Think again. This stolen and smuggled cannon-like gun is huge. It was found on a ship in Boston.

Pagan millones por restos de meteoritos (Thousands paid for meteorite samples)
(10 November 2014, El Economista)
Of course people collect meteorite bits. In many jurisdictions this is illegal and in some, meteorites are regulated by the same laws as antiquities.