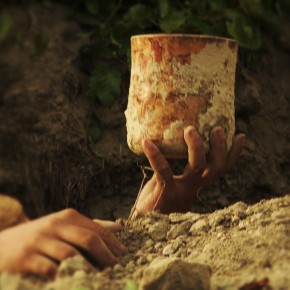 Out of the looters trench and on to the computer in less than an hour: a film review from Belize.

Halfway through last year I began to move a little bit away from the Andes and started to focus in on antiquities trafficking in Central America. As I began my round of initial cold emails to brilliant (and kind) folks associated with aspects of Central American cultural property, many mentioned that a documentary was being made about the looting and trafficking of spectacular Maya polychrome pottery and that the people involved in that had spoken to everyone.. There was a general feeling that these folks had done a through and interesting job and everyone was excited to see the result.

About two weeks ago, just before I left for Belize, I had the honour of previewing this film. I’m so glad I did. Dance of the Maize God by Nightfire Films is worth your time. It is strange to say this about a documentary on as sad a topic as the looting of Maya pottery, but it was delightful. Obviously I am now going to tell you why. 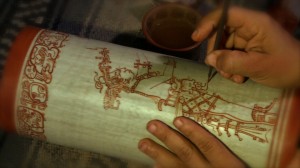 In a purely personal sense, the Maya are magical (to me). Since my first day of my first Maya archaeology class (late 2001, Maya Cities, Prof. Norman Hammond, Boston University), every scrap of Maya culture to come my way has captivated me. Captivated me like no other culture ever has. Even as I moved away from the Maya for reasons that are an entirely different story, I’ve found myself, over the years, following along on advances in Maya studies and, quite often, drifting into the world of Maya iconography. I think it is fair to say that I research the illicit trafficking of antiquities because I fell in love with the Maya and feel a deep sense of personal loss at what has been destroyed to feed the Western demand for Maya artefacts. Because collectors want pretty things, I personally feel I have been robbed of the information about the Maya that brings me wonder and joy.

Before we talk about the portrayal of looting and the antiquities trade, I must say they do a great job at bringing very complex pieces of Maya art to life in a clear and approachable way. Maya pottery scenes are explained through digitally highlighting key components of the painting that eventually come together as a whole for the viewer. The Maya novice moves away from “Other” confusion and into the Maya world. Beyond getting a strong feeling for the iconography, the film helps you imagine how the Maya used these pots: held them in their hands and drank. The distance between “us” and “them” was significantly shortened. I instantly wished I had 100 articles about Maya iconography to drown myself in. 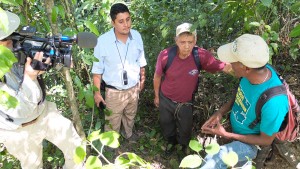 The looting and trafficking of these vases is approached head on. They speak to the right people, they cover all of the relevant issues associated with the illicit trade, and the touch on some of the major controversies. For example, should we use/publish looted material or no? They leave it for the viewer to decide. They also make a clear connection between demand and supply. Maya sites are looted because people are willing to buy looted pots…collectors don’t ‘save’ looted pots that are just floating around out there. The producers of the film, quite rightly, don’t validate that spurious excuse (and no one should). They do allow the Michael Coes of the world (including, well, Michael Coe) to explain their views on engaging with collectors and looted material, and I am glad they did.

I admit, I would have liked to see more from the collector/dealer/intermediary/looter side of things. Word is that the makers of this film talked to a number of those people, but that may have been just background. Few of them were talking on the film and, thus, it is hard to tell what information comes from those sources. That, perhaps, is only really of interest to me because I find those people rather hard to approach (or hard to convince that I am not going to burn them), and I find archaeologists and experts easy to approach (“us” vs. “them” mentality, not that I like that). I’d have liked the film to separate that out for me (and, perhaps, give me some names of middle market people who are chatty).

If the makers of the film are able to make notes, transcripts, cut portions of the film, or anything to do with interviews available for academic research, we at the Trafficking Culture project would love to have a look.

To wrap this up, I’d like to say that I watched the film with a non Mayanist, non archaeology sort. He has heard me yammer about the Maya for eons (I am sure it feels like eons at least), but really I think that this is the first time he saw what all my fuss was about. Dance of the Maize god showed what I love about the Maya, and what we all have lost in a persuasive and visual way. When the film was over, I felt that my companion ‘got it’.

I look forward to when the film is for sale so I can buy a copy and make all of my students and friends watch it. If you get the chance to see it, don’t pass it up.

Thank you again, Rosie Guthrie and David Lebrun for letting me take an early look. I very much appreciate it. Check out the trailer:

All images in this post are via Nightfire Films and are only to be used for review purposes.