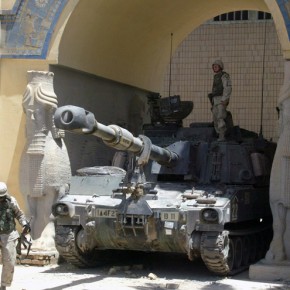 Hot this week: Iraq…and Iraq again. Don’t believe all the news you read, but do be worried.

I will be away on a short fieldwork stint studying antiquities trafficking in Belize until 1 August. As I will be away from my usual computer perch, Culture Crime News might suffer for a couple weeks. I’ll see what I can do but there might not be newsletters or news posts until I return.

Dodgy eBay Sellers Peddle Tall Tales and Fake Art
(9 July 2014, ArtNet News)|
We already know this. They reach out to eBay and hear about the specific policy for fake art. Reproductions allowed.

Outgunned in the Search for Stolen Art
(12 July 2014, Newsweek)
Words from the New York School of Law “Fakes, Forgeries, and Looted and Stolen Art” conference with a run down of some recent cases.

What we’ve lost: the two stories of the ancient Maya Buenavista vase (Belize)
(12 July 2014, Anonymous Swiss Collector)
Two stories that could be told about the same vase: one if it was looted, one if it was found by archaeologists. An excited post about Belize.

Lost cities and looted tombs: Studying artifact smuggling in Belize
(11 July 2014, Anonymous Swiss Collector)
My post for the Day of Archaeology about what I am up to in Belize.

Protegen el patrimonio subacuático de Yucatán (Protecting the underwater heritage of Yucatan, Mexico)
(12 July 2014, Sipse)
A new article has been added to Mexican law stating that any unauthorized exploitation of underwater heritage remains will be subject to stiffer fines and imprisonment.

Hallazgos arqueológicos en QRoo obligan a redoblar vigilancia (Archaeological sites in Quintana Roo require redoubled vigilance, Mexico)
(13 July 2014, 20 Minutos)
Help from such organizations as the Mexican Navy have helped reduce the trafficking of illicit timber, but such efforts are needed to prevent the looting of Maya archaeological sites in Quintana Roo says the National Commission of Natural Protected Areas.

Venezuela welcomes ‘lost Matisse’ back home
(6 July 2014, Buenos Aires Herald)
Stolen over a decade ago and recovered in an FBI sting in Miami, this Matisse is back in Caracas.

Volunteers work to protect California historic site from looters
(7 July 2014, Los Angeles Times)
Profile of a cool program that lets members of the public volunteer as stewards at national parks to document looting and to record when sites/artefacts are exposed due to drops in the water level of local lakes.

UM student, Marine works to protect antiquities from wartime looting (USA)
(13 July 2014, Missoulian)
Profile of former Marine Capt. Thomas Livoti who apparently has been asked by the US Army to restore the ‘Monuments Men’, which, if it goes through, I sincerely hope will be called something else.

Agency accused of violating law on remains, relics (USA)
(11 July 2014, Reno Gazette Journal)
A whistle-blower has revealed that the US Bureau of Reclamation has been systematically ignoring federal law regarding Native American grave goods and human remains in three states. It is being investigated. If this is true it is quite disturbing and may reach to other agencies and locations. I hope you Native American groups hit by this are ready to sue like mad.

Egypt receives eight smuggled artifacts from Denmark
(8 July 2014, Egypt Independent)
The 8 pieces were taken from the Ghanem al-Bahloun Mosque in 2008 and were seized in parcels being sent from the US to Switzerland via Denmark. Also the embassy in Paris received an artefact brought in by a French law office, the lawyers did not disclose who was voluntarily turning it over.

Islamic, pharaonic items returned to Egypt from Denmark and France
(10 July 2014, Ahram Online)
Same general story but with some images of the items returned.

Nigeria: Unesco Warns Nigeria Against Cultural Extinction
(8 July 2014, All Africa)
Nigeria’s UNESCO National Programme Officer on Culture has warned that Nigeria is losing its cultural heritage to the illicit trafficking of artefacts and has called on the government to do more.

Nigeria: Reps Urge UK to Repatriate Stolen Artefacts
(11 July 2014, All Africa)
A motion to push for the repatriation of stolen artefacts passed in the Nigerian House and will be communicated to UK Parliament.

Nigeria: House Congratulates Oba of Benin, Others Over Return of Stolen Artefacts
(11 July 2014, All Africa)
The return of two artefacts from a private citizen in the UK is congratulated officially.

UK museum selling Egyptian artefact, officials to take legal action
(6 July 2014, Ahram Online)
Egypt is now getting involved with the debate over the sale of the Sekhemka statue, instructing its embassy in London to take all legal procedures to prevent the sale at Christie’s this week. The Sekhemka statue is not being claimed by Egypt. The local council seeks to sell it to raise funds.

Egypt fails to retrieve ancient statue before sale at UK auction
(11 July 2014, Egypt Independent)
Sources in the Egyptian Ministry of Culture say that Christie’s offered the statue to them for sale before the auction but they turned the auction house down.

Sale of Egyptian Statue By English Museum Draws Criticism
(11 July 2014, The New York Time)
And it sold for $27 million to an unknown bidder.

Van Gogh’ painting is not family heirloom, owner admits (UK)
(9 July 2014, BBC News)
Owner told people that it was in his family since 1920, before Van Gogh’s were catalogued, however he actually bought it two years ago for 1500 pounds. He still says it is real though.

The art collector, a disputed Van Gogh, a weekly paper and the BBC…(UK)
(11 July 2014, Guardian)
Criticism of the BBC’s handling of the above story.

Stolen Ethiopian Saint John Turns Up at Paris Auction (France)
(7 July 2014, ArtNet news)
17th century painting of a saint was stolen from the Musée de l’Homme sometime before 1989 and ended up in an auction by Maison Piasa. It is now in the Quai Branley where the matching paintings have been transferred. Of course, the painting itself was ‘collected’ in 1932 by ethnologist Marcel Griaule who replaced them with oil copies, a move that was criticized by Ethiopian officials at the time. Let’s call this one twice stolen.

French Museum Collections in Trouble
(10 July 2014, Hyperallergic)
A government audit has found numerous state museum collection are kept under insufficient security measures and there are issues of provenance related to WWII in a lot of institutions.

Detective Inspector: Pro criminals go for Finnish design
(10 July 2014, YLE)
Design products are a type of stolen cultural property that is often neglected in our discussions.

Germany Returns Greek Antiquities
(8 July 2014, Greek Reporter)
This is that large trove of objects that were illegally transferred during WWII.

Middle Age art stolen from Swedish church
(9 July 2014, The Local)
Quite a number of pieces from the Middle Ages were stolen from the Rönö Church in Vikbolandet, and the thieves appeared to have tried to set the place on fire as well.

As fakes unnerve India’s art market, the trade is pushing for an antiquated solution
(7 July 2014, Quartz India)
The author of this piece is criticizing the establishment of an art regulatory body and is pro the deregulation of ancient and modern art trade in general. As you can imagine, I am not into that.

Shadow over authenticity of Tagore painting reaches PMO (India)
(27 July 2014, Bangalore Mirror)
In what seems like an open and shut case of a fake Rabindranath Tagore, an auction house is sticking to its guns and now a Kolkata-based researcher has complained to the Prime Minister’s Office.

Idol inaction delaying Kapoor’s trial: India
(12 July 2014, The Australian)
Indian police say that delays in the trial of antiquities smuggler Subhash Kapoor are due to inaction by the Australian Government. (Paywall)

In search of the lost antiquities (Pakistan)
(8 July 2014, Dawn)
Sri Lanka is, apparently, hunting for a ship wreck that contained antiquities that were questionably collected years ago. The author asks why Pakistan isn’t looking for it because it likely holds Pakistani antiquities as well.

Chinese court rejects family’s right to treasures in their great-grandfather’s tomb
(8 July 2014, South China Morning Post)
An absolutely fascinating case. When does an object become national heritage and thus national property. A 80+-year-old Qing dynasty tomb was looted of 32 grave goods, the goods were recovered by the police, and now the great-grandchildren of the person buried in the tomb want those items. The court ruled that the items belong to the state.

Antique church icons dumped at roadside (Philippines)
(13 July 2014, The Bohol Standard)
Four church icons were found by the roadside in Bohol in a sack. No one knows where they are from. Philippine icon theft is a thing.

there is no evidence that the Tomb of Prophet Jonah has been destroyed
(10 July 2014, Conflict Antiquities)
Before I post almost anything about West Asia, I check first with Sam Hardy’s Conflict Antiquities blog. You should too: it is probably the most useful blog in this field. The Daily Mail is flogging images that they say are this tomb being destroyed. There is no real evidence that is the case.

ISIS Is About to Destroy Biblical History in Iraq
(7 July 2014, Daily Beast)
I am a bit weary about posting ‘news’ coming out of Iraq right now. It is hard to tell what is credible at this point.

The Plight Of Mosul’s Museum: Iraqi Antiquities At Risk Of Ruin
(9 July 2014, NPR)
An audio interview with the Daily Beast author from above.

Fears grow for safety of Iraq’s cultural heritage under ISIS
(10 July 2014, The Conversation)
What everyone is writing about. This by UCL’s Elanor Robson.

Daylesford police recover $135K worth of stolen church items (Australia)
(7 July 2014, The Courier)
The pieces, some dating to the 17th century, were found dumped by the side of the road. No suspect has been caught.

Behind the Ivory Curtain
(6 July 2014, ArtNet News)
A discussion of the various new bans on ivory sales in the US, in particular how they shift the burden of proof for ivory antiques and antiquities.

Utah man pleads guilty to charge that he took a 190-million-year-old dinosaur footprint
(9 July 2014, The Daily Journal)
He ended up getting one year probation and has to pay $15k restitution.

Dinosaur skeletons, egg returned to Mongolia (USA)
(10 July 2014, US Immigration and Customs Enforcement)
A major return to Mongolia from the collection of the now-convicted Eric Prokopi.