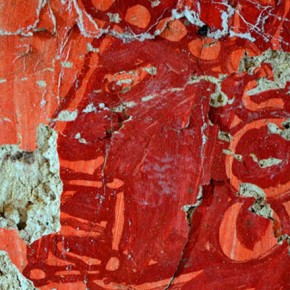 It seems like Maya tomb news is coming hot and heavy these past few weeks. I waxed sentimental about recent finds at El Peru-Wak’a recently as you all know. Last week (and into this week) the internets were abuzz with news that the ‘oldest Maya tomb‘ (sorry, eye-roll) was uncovered at Tak’alik Ab’aj 1.  Today I read that archaeologists with the INAH have entered a tomb at the site of Palenque to perform stabilization work, giving me a view of amazing red murals to go with my Tuesday morning coffee. I’m a sucker for a Maya mural. Today is a good day.

Two things mentioned in that article got me thinking. First, this tomb is being conserved in a very interesting way. Archaeologists have known about it for a while, have poked at it a few times, are monitoring the situation, but they aren’t necessarily in any rush to excavate it fully. The idea of this sort of preservation is that the tomb is good as it is, we only need rock the boat and dig it out if it either becomes unstable or we have nothing else to do with ourselves archaeologically. For every year that one ‘waits’ on a site/tomb/whatever, we have a whole host of new scientific tools to apply to the excavation. Waiting on this tomb at Palenque is possible because it has not been looted (naturally) and because the archaeologists involved believe that it wont be looted in the future.

I admit that I am not 100% confident about that. I can’t really picture a situation where Temple XX at Palenque, which the tomb is within, is looted. If you look on the map, Temple XX is kind of right there, in the middle of the popular tourist party that those crazy archaeologists call the Cross Group.2 But the region can be unstable3; and even the most stable places get robbed. To quote the Past Horizon’s article: “already visible are eleven vessels and about a hundred smaller artefacts such as beads, mostly green stone”. From what I am looking at, they don’t look quite worth busting all up into a World Heritage Site at night, but who knows?

What really caught my attention was the statement that even though folks are going into the tomb to stabilize the murals, they will not be removing anything from the tomb. Why you ask? Well: “early studies show a high concentration of mercuric sulfide or cinnabar”. The artefacts are toxic!  In pre-Conquest Peru, “the toxic properties of mercury were well known. It was dangerous to those who mined and processed cinnabar, it caused shaking, loss of sense, and death…data suggest that mercury was retorted from cinnabar and the workers were exposed to the toxic mercury fumes.”4 So yes, ideas of preservation in situ are there, but really the tomb is covered in death powder.

Why I am bringing this up is that we sometimes talk about the danger involved in antiquities smuggling.  We talk about being arrested, we talk about being shot, heck we even talk about being smushed (at least I do…). We never really talk about potential toxic exposure. I literally have nightmares about catching some sort of horrible deadly fungus from a mummy.5 I will now have cinnabar nightmares. I wear a face mask when I clean ancient glass (I know the lil’ bits that come off are just dying to fly down into my lungs). And so on and so on. How is some dude, looting a tomb back-a-bush somewhere supposed to evaluate this kind of risk. Paredes Maurey reported that chicleros and other folks regularly use unsellable ancient Maya pottery for cooking in and eating off of. It could be covered in cinnabar! That is horrible!

Sure sure, that is an outside risk, but when we think about anti-looting community education, beyond emphasis of illegality and half-baked promises of tourism revenue, it might be worth telling folks that mercury poisoning is a risk associated with Mesoamerican looting. A slight risk, but a risk none the less. Plus, you know, I am going to say it. At various points we need to make certain folks realize that this isn’t just an academic squabble between financial and educational elites. Sometimes you have to go for the gut and say “yeah, well, some tombs are covered in mercury and we are supposed to be fine with a bunch of poor folks unknowingly being exposed to that so that rich people can have pretty things”.

I think I need some more coffee.

As a complete and total aside, because I mentioned Tak’alik Ab’aj, lemmie tell y’all about Monument 23 from the site. I kid you not, it is an Olmec-ish figural sculpture of a seated person emerging from a cave, holding an infant (think Las Limas Monument 1 which was, of course, stolen from the Xalapa museum in 1970 and recovered in a hotel room in San Antonio, TX)…THAT WAS CARVED OUT OF A PRE-EXISTING OLMEC MONUMENTAL HEAD! Well, most likely it was. How sweet is that?

—
1. The state of my Maya knowledge is such that I truly thought the site was called Abaj Takalik…which it was, just not anymore. I am mentally in the Maya world of 1975 or so. Wikipedia says the site was named by Suzanna Miles in 1965 but doesn’t say why the words were inverted. I’m guessing it is meant to mean something in a modern Maya dialect and she got the words backwards? Apparently back in the back it was maybe called something like ‘Kooja’.

2.  Here is a short but worthwhile piece on the challenge of presenting what is going on at Temple XX to the public by C. Rudy Larios Villalta: http://www.mesoweb.com/palenque/features/larios/TXX.html

3. Somehow when Subcommandante Marcos had a to-do there in 2006, no one took some hot shots of him against the backdrop of the ruins so you all don’t get to see that. Nor do you get to see the Zapatista doll I bought at Palenque in 2003 because it is in Boston and I am in Scotland.

4. Petersen, G. (2010). Mining and Metallurgy in Ancient Perú. The Geological Society of America.