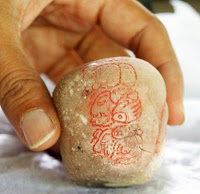 I was delighted to hear that David Friedel, Juan Carlos Pérez, and their team have discovered a tomb at El Perú-Waka’ that they can convincingly argue is that of Kaloomte’ K’abel, one of the Maya ladies of the Péten’s past that really seems to have had some power.

I kind of cringed at how the media focused on the “Maya Warrior Queen” idea: it makes her sounds like some sort of Greek-style Amazon in the jungle rather than the leader of a city-state. However, she bore a (probably symbolic) title that indicated warrior status and the reporters have to give the public what they want, right?

Anyhow, the far far far more exciting thing is that she is a known, named Maya individual who can be linked to a specific burial and this is remarkably rare in the Maya world. Sure you would think that the elite Maya, who wrote their names on EVERYTHING, would write their names all over tombs but somehow it didn’t play out like that. Including this tomb there are only five Classic Maya tombs which can be associated with a named individual according to David Freidel. There are a lot of factors at play here but, because this is an illicit antiquities blog, I’m going to go right out and say that we only have five identified individuals in Maya tombs because every archaeological site in the region was horribly looted to feed the international illicit market for Maya antiquities.

If the K’abel tomb can be used as an example of how personal names appear on Maya grave goods we should be looking to writing on portable antiquities found within the tomb. To summarize the contents of this very helpful interim report on the K’abel tomb:

Sure it isn’t the tomb of Pakal, identification-wise, but it is a lot more than usual.

So El Perú-Waka, as you gathered from that mention of the Cleveland Art Museum, was looted like mad. Speculating from information presented in the report, there are reasons why this tomb may have been missed by the looters but there is no need to go into that here. Had K’abel’s tomb been looted, that jar would just be another jar out on the art market with no information. Her tomb would be an empty hole, and we would have no exciting headlines about Maya Warrior Queens to dream about over our Saturday morning coffee.2

But you all know that. I’m preaching to the choir here.

That was really just a long intro to what I really wanted to mention: the idea of museums paying for replicas of the looted monuments in their possession to be placed at the original archaeological sites. In the report, the researchers mention that “K’inich Bahlam II [K’abel’s hubby] on El Peru Stela 33 is in the Kimbell Art Museum and a replica of this monument will be installed at Waka’.” In a 2007 interview conducted by NPR, David Freidel mentions that the Kimbell has promised the replica.3 The fine folks at NPR rung the Cleveland Art Museum who informed them that they had no plans to provide a replica of K’abel’s Stela 34.4 Salvador Lopez Aguilar is quoted as saying:

This is the irony: That in place of them keeping the replica and us getting the original, now they are giving a replica to the poor Guatemalans, when it shouldn’t be that way

I’m not really sure why the whole idea of museums with large looted objects offering copies for on-site display surprised me so much. Indeed, it is actually quite normal to see replica stelae at Maya sites. The reality of the situation is that many stela that were never looted are now in site, regional, or national museums in their countries of origin and not propped up where the Classic Maya put them. This is not only because they might get nicked, but because of the damaging effects of the jungle environment. They get rained on.

So in a perfect world in which the beautiful depiction of Lady K’abel was left standing where she wanted it placed (and not hacked to bits with a saw, trafficked into the United States, and bought by unscrupulous sorts at the Cleveland Art Museum), I, as the typical El Perú-Waka’ visitor,5 would likely see a replica of the stela at the site. That is provided that the money was found to transport the stela to a Guatemalan museum and to make a replica of course. I wouldn’t be seeing the real thing. Is the Kimbell’s theoretical replica any different?

I think so. The obvious: it doesn’t right a historic wrong, it doesn’t make the removal of the stela any less illegal under Guatemala law,6 and there isn’t a one-to-one correlation between ‘stela at site’ and ‘stela at museum that the people of Guatemala could conceivably go see’. It certainly doesn’t address the larger questions, like why on earth any self respecting museum or art collector would be party to the buying and selling of beautiful monuments that had been literally sawed into pieces specifically for transport onto the market. That isn’t loving art. Anyhow, I think the really interesting difference is the shift in who pays and what that means. If this replica ever happens, that would be the Kimbell actually spending money to try to make a bad situation (a site without stelae, a stela without context) marginally better. By doing so, they are sort of admitting that they are culpable for whatever harm their acquisition of the stela caused. Admitting fault is step one, no? Better than nothing.

Y’all know me, I think that the Kimbell should probably give back the whole stela, pay for a replica, and, I don’t know, apologize directly? But that isn’t going to happen anytime soon.

—
1. her name can’t quite be said yet, K’ab___el has an untranslatable bit in the middle
2. accurate depiction of most of my Saturday mornings
3. four years on, Kimbell…where is the replica?!
4. big surprise! See But wait everyone, there are other antiquities on the Cleveland Museum website!
5. oh man I want to visit El Perú like you wouldn’t believe
6. I know…edgy but I’m not going to get bogged down by that mire right now. Lets just say it was