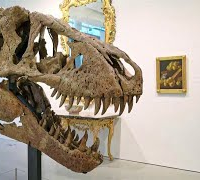 It’s no secret, I’ve been obsessing about T. rex for a while. They are so gosh darned charismatic and they make people do very weird things. Over. the past couple of months I’ve been writing a paper for our Power of Things journal CFP (alongside Emily Peacock) about T. rex as “destructive objects”. As sort of giant suns or black holes that suck people in and destroy them. Everything seems to go wrong with a T. rex in the picture. Crimes, lawsuits, and vast sums of money fly around while the T. rex resist basic concepts such as value or definition. Seriously humans (extensively) argue all the way to court about what a T. rex even IS. I’ll tell you what T. rex is? T. rex is appealing and T. rex is problems.

As if to prove my point, TWO T. rex have appeared on the high end auction market while we are trying to get our paper together. The submission deadline of the paper is, of course, the day that the first fossil goes on sale, meaning both T. rex resist final analysis by us. Maybe we can update during the peer review stage, I made a foot note. But aside from how these T. rex are making my life difficult by being so very alluring, it is worth looking at these two sales for a moment. There are some things going on here that I want to flag. I don’t know what they all mean yet, but I’m flagging them.

Shen for sale in Hong Kong

On 30 November, as I fly to New Zealand and as my paper already enters submission, 54% of a T. rex skeleton will be on the block at Christie’s Hong Kong. Called “Shen” because all T. rex need a name (because they are so very agentive and prone to forming relationships) and, explicitly, because “Sue” and “Stan” have S names, this T. rex is snuggled amongst contemporary paintings as lot 23 in Christie’s “20th/21st Century Art Evening Sale“. I’ve been thinking a lot about “intruders” like Shen. I wrote about a similar intruder in this book chapter where my co-author Simon Mackenzie and I consider the concept of a “desirescape”: a deeply affective network of objects that lures people in. Shen, too, may be tapping in to networked desire…to the paintings that surround it, creating connections related to value, worth, and uniqueness that eminent from the paintings. There’s an implication that Shen belongs among them: Shen isn’t an addendum at the end of the sale or a weird additional precursor at the start of the sale. Nope. Shen’s right there in the painting thick, projecting meaning, being desirable.

However one thing that sets Shen apart from the paintings (you know, besides being a dinosaur) is that Christie’s is declining to give a price estimate for Shen. All other objects in the sale have an estimated price range in HKD, but not ol’ Shen. This is likely because Christie’s has no idea how to estimate Shen’s likely price fetched. As we discuss in our upcoming paper, T. rex resists being valued and they regularly over or under sell: they don’t do what people want. Christie’s is likely thinking about the Stan sale, which saw the T. rex sell for a staggering $31.8 mil. However Stan was a “better” T. rex than Shen: more complete and certainly more famous. If Christie’s estimates Shen too high (based on Stan), then the sale at the low value will be dubbed a failure. If they estimate Shen too low, based on its lack of fame and lack of many bones, they risk signalling that Shen isn’t a “good enough” T. rex to pour millions into. Nope. They are staying out of it.

But Shen is still being sold in the shadow of Sue and Stan who are both cited in the promo text for the T. rex. Sure those T. rex both inspired litigation and in the case of Sue, controversial convictions, but they sold at auction for buckets of money so they are considered good friends for Shen to be considered with.

You better believe that the moment I get off the plane I’ll be checking in on the Shen sale.

Maximus for sale in New York

So just when I thought I had sorted Shen out, Maximus appeared. Maximus! What a name. I mean seriously, Maximus? Maximus is quite a good T. rex skull that Sotheby’s is offering in a stand alone sale on 8 November…so just over a week after Shen is sold by Christie’s. The close timing between the two is impossible to ignore and I find it hard to believe it is coincidental. As both adverts make very clear, T. rex don’t come up for sale all that often, and now there are two? I wonder if Maximus is positioned to catch Shen spill over. Only one buyer can walk away with Shen, but if Shen is getting a little two hot for some bidders, Sotheby’s might expect them to keep their pocketbooks closed and instead go for Maximus. Sure, Maximus is just a skull, but Shin is only barely over half a T. rex so a good skull might be good enough in comparison.

Unlike Shen, Maximus has a price estimate. Sotheby’s places Maximus at $15-$20 mil. For just a skull. That’s a lot. Actually that is a whole lot and I think it must be the Stan effect. If you sit and read all the court documents that proceeded the sale of Stan (and I have, oh I have), you’ll see that the people closest to Stan valued it at about $6mil (although Neal Larson testified that he felt he could get $10mil for Stan) and the court went with that valuation. That was only a couple years ago. However when Stan sold for $31.8 mil that created a situation where the going rate for a T. rex was much higher and, presumably, the going rate for just a head is over double what the court valued Stan at.

Maybe. We haven’t seen a skull for sale like this so we haven’t tested it. Maybe value requires completeness? Or maybe, as Sotheby’s seems to be betting on, the money is in the head anyway.

Images released by Sotheby’s shows Maximus not just hanging out among artworks, no. In some photos Maximus appears to eat the paintings: chomping down and consuming their value. The images push deep association between art and dinosaur with value flowing between them. Maximus is among art and IS art. The art buyer can want a T. rex too. Maximus is joining the collection. Maximus is fully within the art space. No science here folks!

Like the Shen sale, the Sue and Stan sales are mentioned in the Maximus text, complete with prices fetched. Sue and Stan’s association with Maximus lends the skull value, legitimises the sale, and lures buyers. The Shen sale isn’t mentioned though, that’s for sure. Shen is competition.

What’s next for the T. rex market?

I don’t really know. A lot depends on the outcome of these sales. Sotheby’s Gorgosaur sale was not quite a flop, but it didn’t inspire Stan-sized bidding. However a Gorgosaur isn’t a T. rex. Still, while T. rex are rare, they are getting less rare with each surprise appearance at sale. Thinking about it, it is getting less surprising. Further, there are likely limited potential T. rex buyers out there, although again if T. rex is effectively ‘artified’, maybe the buyer pool increases. Let’s see.

Meanwhile I just got a new book in the mail today: “Dinosaurs Are Collectible: Digging for Dinosaurs: the Art, the Science” by Thijs Demeulemeester and Koen Stein. It couldn’t have come at a better time.