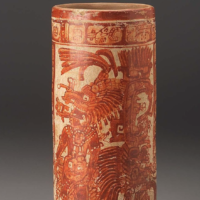 If you wait long enough, the same names turn up in art crime/fraud accusations again and again.

A recent addition to my Saturday mornings has been an attempt to peacefully read art news over a warm cup of coffee and the sweet tones of a 3-year-old yelling the Paw Patrol theme song in a mix of Dutch and English. I like physicality, so I’ve been reading The Art Newspaper because at this point it seems that 85% of their coverage are topics directly related to my work. This latest editions front page banner headline was: “Old Master upgrades: how dealer James Stunt’s ‘sleepers’ became autograph Van Dycks worth millions“, an article by Georgina Adam and Mark Hollingsworth. In other words, exactly the sort of crimey fraudy stuff that is the butter to my bread, the cream to my coffee, the ear plug to my screamed Paw Patrol theme tune.

This article reports on how Malcolm Rogers, former director of the Museum of Fine Arts Boston, has personally attributed a shocking number of relatively low-cost ‘circle-of’ paintings owned by James Stunt as ‘artist hand’, boosting the total value (in theory) for all those works up about 70mil GBP. Stunt is on trial in the UK for money laundering, so yeah.

Rogers denies doing anything wrong, and even denies authenticating the pieces, stating “it is naïve to think that my opinion had the effect of ‘greatly increasing their value’.” That’s hogwash, he’s the former head of a major museum, which is why I assume that Adam and Hollingsworth didn’t bother to directly call that out. Everyone knows it. Ultimately this reeks of a weird financial relationship that exemplifies how easy it is to manipulate value in the art world.

So the MFA Boston has a collection of Maya Pottery that was unambiguously, violently, and illegally ripped from hundreds of Maya tombs, causing the utter destruction of countless Maya buildings in the Petén. I say this confidently and with experience, as I have worked in the physical holes that the so-called November Collection created. They should not have that collection. They should never have accepted it. They should return it to Guatemala (and some probably to Belize and Mexico). These are strong words, but to me the November Collection is a personal affront. It has robbed me personally of exciting information about my favourite topic in the world: the Maya. Weirdly, it has even put me in physical danger as I had to work inside the rough looters holes it created. Sigh.

Anyhow, Rogers wasn’t director of the MFA when they accepted the November Collection (which, I note, caused a public outcry…). However when issues related to the collection hit the press again in the late 1990s, Rogers was quoted as saying that the MFA conducted “lavish due diligence” on the pieces and that he was convinced that museum acquired the pieces legally.

Problem is that the MFA’s own lawyer from the time went on the record saying that they basically were unaware of Guatemala’s 1947 law on the topic and that he knew the collection was exported from Guatemala without permits. He said he knew that the Guatemalan government, distracted by their civil war, didn’t even know the pieces were out of Guatemala and because they didn’t know they couldn’t raise a formal objection to the acquisition, so the MFA could just go along and proceed.

In other words this ‘lavish due diligence’ Rogers believed in was basically an attorney who didn’t bother to find Guatemala’s relevant law (which bars export without a permit), who knew none of the pieces had an export permit, and who was pro not even asking Guatemala about the pieces so that they couldn’t raise an objection. So really, taking advantage of devastating civil war (and genocide!!) for the museum’s advantage. Umm. Yeah.

So for the past 10 years I’ve classified Rogers in my head as someone who was willing to not be truthful when it suited him. This Art Newspaper article seems to show that if you wait long enough, the same names will turn up again and again…

[Image of Homul-style vase from the November Collection in the MFA. I chose this vase because there is every chance that I have literally worked in the hole that this vase came out of. No way to be sure but the type is named after the site of Homul, which I worked at years ago. That site is heavily looted. The result are the disarticulated contents of the MFA’s collection. Yes, this is personal.]