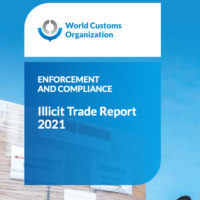 The World Custom Organization’s “Illicit Trade Report” for 2021 is out and you can find it by clicking here.

This presents some information about the illicit trade in cultural heritage. I’m happy to say that this year’s report is different than previous reports in one very, very important way. This year’s report does not have a bunch of charts and graphs for everyone to misinterpret. Hooray!

When the 2019 report was issued (side note, has anyone seen a 2020 report? I haven’t. Maybe these reports are biannual?), I wrote a blog entry entitled “No, the WCO report doesn’t show that ‘Business of Smuggling Cultural Property Is Not as Big as People Think’“. This focused on the data quality and comparability in the report, and the significance of presenting limited and incomplete data, which they admit is limited and incomplete, in visualisations that SEEM complete. One can read the visualisations as saying something that they don’t…and LOADS of people read those visualisations as saying something they don’t. I had to deal with misunderstandings of the visuals in various forms (from reporters, from IGO reps, from policy sorts) since it was issued.

Perhaps the WCO had the same problem. The choice to not use charts and graphs is conscious here I think: all the other sections have them. The authors directly point out the incomplete nature of their data, and how few countries send data and participate. In the end they choose to feature a number of case studies that, they say, really come from OSINT research rather than anything internal to the WCO. There’s a customs focus, but no misinterpretable numbers. I’m really glad to see that.

It is good and important to have Heritage included in such a report, but we have to anticipate how data can be misinterpreted and misused. Scrapping the confusing charts helps.