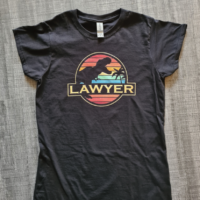 An important component of my current project involves the way humans and fossils connect and what those connections bring. In particular, I am thinking about the agentic qualities of fossils and how they inspire action. For a number of reasons I have been thinking that 2022 is the year of the Tyrannosaurs for me, as the hype around those guys really encapsulates the sort of social relationships between people and things that I am trying to put my finger on. Maybe all fossils are sort of agentic, but gosh T. rex sure inspires action. A lot of action.

After deciding to give in to the lure of the T. rex myself, I was struggling to come up with a way to organise my query. A way to focus interviews and data gathering. A way to deal with the vast amount of T. rex-ness that is in our culture. I played around with a few ideas, but one from yesterday seemed to strike a chord with the twitter at least.

This year I am going to research and write the stories of Tyrannosaurs in the courts. Lawsuits, criminal cases, seizures, disputes, etc. I’m going to interview around these cases. I’m going to centre the object in the research. This might lead to a popular press book.

In the course of about 20 minutes, I came up with 11 potential cases to look at…12 after I thought of another one on my bike ride home. There aren’t all that many T. rex specimens so it’s pretty telling that they end up in the legal system so often. The very reason that everyone is so litigious around T. rex is what I am getting at with my research. Sure one could say “everyone’s litigious around T. rex because they are so valuable”…but why are they so valuable? I think diving in to the networks of relationships between object and people and place in these cases may help me understand that value.

More importantly for me, one can conceive of these cases as the T. rex agentically inspiring action, causing people to act, instigating a chain of events that leads to folks committing crimes or filing suit. It is exactly my job to look into that. Here’s a corner of T. rex agency that I can scratch at, and it is a law/crime corner. I’m a law/crime person. Hooray!

Number 1: if you have expertise in T. rex anything at all and are willing to talk with me about any Tyrannosaur-related court case, law suit, or any other dispute, please contact me. My plan is to first spend some time doing open source research on the cases I know about and compile a list of people to contact, so I’m not doing cold contacts immediately, but I do want to hear from you if you are ready to chat now.

Number 2: I’m staking my claim here. If you write a Lex Rex book before I do, you’ve stolen my idea and I’ll be sorely tempted to add to my Lex Rex docket with a totally frivolous American lawsuit. Probably not really, but I will rag on you in all places then write a better, cooler book. Don’t steal this from me. This is my Lex Rex! (I say this knowing that various people are working on parallel projects that I respect and expect to reference the heck out of!).