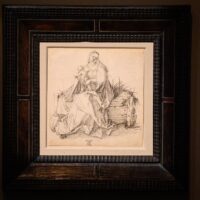 I take my coffee black and on a drawing as an artificial ageing agent.

I’m on holiday on the Georgia coast, which means I have time in the morning to, once again, drink my coffee and read the ‘controversy section’ of the art news. I used to do this every single day, which kept me well informed and kept culturecrimenews.org and stolengods.org well updated. In the past couple of years my workload has grown to such a level that 30 minutes of art news in the morning isn’t workable. Maybe I’ll get back to it on non-holidays. Maybe. For you early career and student sorts out there, it’s a good way to spend your time if you have it.

Anyhow, This morning I read Alyssa Lukpat’s NYT article on a possible Dürer with relish: He Paid $30 for a Drawing. It Could Be a Renaissance Work Worth Millions. But as I drank my coffee, I started to wonder exactly what attracts me to stories like this. Judging from the headline, I believe the expected draw is supposed to be junk that is treasure, Antiques Road Show shock face, it-could-happen-to-me surprise fortune. Ehh. I don’t care about that. Good on that guy, lucky him, but his profit is rather boring. There is an appeal of an art object out of time and out of place, shouldn’t exist but does, or is found where it shouldn’t be…but a Concord estate sale isn’t like, I don’t know, finding one of only three (or four) surviving ancient Maya books in a basket in a Paris chimney. So why was I psyched enough about this story to go through the process of accessing NYT paywalled material?

While I don’t have time to read the art news every day anymore, I did for years, meaning I’ve read thousands of media pieces. These stories have patterns, and one pattern that shows up in the “is this junk really a jewel” art pieces is that the “experts” disagree about the authenticity of a work. This professional disagreement reflects the strange muddle that is the entire concept of authenticity, its persuasive and pervasive power in the art market, and the role of the idea of connoisseurship in everything. Ultimately authenticity and reality is whatever the market will bear (as is price, and price is proxy for authenticity), but everyone still holds on to the idea of an ultimate truth. Dürer made that drawing or he didn’t make that drawing. There’s no place in the art world for a piece that both is and isn’t a Dürer in equal measure. You have to take sides. We all have to take sides.

So let’s look at this case, and note I only have the info in the NYT article to go on, I know nothing more. If the piece is a Dürer, it is worth millions. If it is by Hans Baldung it would be worth only a quarter of the Dürer estimate. Maybe worth is the wrong word here: someone would be willing to pay only a quarter of what they would for the same exactly work by Dürer. Because it would be the same drawing of course, it just wouldn’t be contextualised by the power of Dürer’s other work. Sorry Baldung, you just don’t have the cultural cachet.

But where this case really gets juicy for me are in the silly authentication details. The authenticating expert first said that the piece “had been stained with tea or coffee to make it look like an antique”. When pushed, however, she located a watermark that is associated with Dürer. No further discussion of this tea/coffee problem.

Next detail, the investor (yes, I know) in the drawing went on a “tour of 14 cities around the world to try to authenticate the drawing”, stating that all but one expert thought the drawing was a Dürer. Who were these 14 experts? Why so many (answer from me: to drum up quotable support because of prior authenticity challenges and thus increase confidence in potential buyers)? Who was the dissenter? Why did they disagree? They mention a Dr Friz Koreny in Vienna who, incidentally, is doing his own publication about the piece, as someone who thinks “authentic but not Dürer”. Is he the dissenter?

For whatever reason, I love watching sides in these debates posture, argue, re-posture, then sue everyone. Then I buy the book about it and review it here. See Salvator Mundi. See Cardsharps. Not that this one will progress like that, but there are enough fo the elements there that it could always take a weird twist later: a scientific test that detects coffee, three other “Dürers” with the right watermark that suspiciously appear in close succession, who knows. Or nothing. Maybe it is (or becomes) a Dürer and we’re set.

No matter what, it’s interesting. To me. There’s probably a paper in it somewhere, some day.