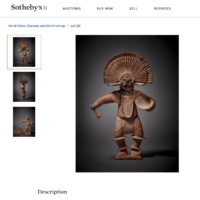 Buying them is dumb

Another day, another public sale of lightly-, under-, and un-provenanced Latin American cultural objects. The focus this week is on Sotheby’s Art of Africa, Oceania, and the Americas sale, the annual racist art market conglomeration of what they once happily called “Primitive” or “Tribal” art, which is taking place online and ending today. There are around 24 lots that *could* be Mexican, and Mexico is understandably upset about this and stories the Mexican media reports a complaint has been made to the Mexican(?) Attorney General’s office. In the AP wire piece on the topic, it is reported that “the institute said it has appealed to Interpol to request legal and diplomatic assistance in the case.” That’s…problematic. Actually there are a lot of problems here.

Problem one: legal assistance from Interpol

I have a positive relationship with Interpol, and what they do in this field is important. However, their role is often misunderstood by, well, everyone…including I think the reporter who wrote the AP wire piece. Interpol does not provide legal or diplomatic assistance. Interpol maintains a database of stolen cultural objects and helps coordinate police efforts in this field across Interpol member states. They also provide training. They have no investigative capability and they are a police organization, not lawyers or diplomats. The objects being sold at Sotheby’s are not in Interpol’s stolen art database: they have been looted from the ground and, definitionally, cannot be there. Further, Mexico would know this for sure since Mexico is the one who has to supply information to Interpol about its stolen art for database inclusion. Mexico asking Interpol of Mexican antiquities are in their database seems a round-about way of essentially checking their own files.

I do not have any qualms about saying that all of the Mexican antiquities in the Sotheby’s auction (at least the authentic ones…see below), were illegally looted in Mexico, illegally imported into the United States, and are absolutely stolen goods. All of them have an earliest provenance date well after Mexico declared cultural objects to be national property. Most have earliest dates in the 80s and 90s (URGH!), with exactly one, this ballgame thingie that may not actually be Mexican, which has a solid date of 1944. Still not early enough to be legal though.

Anyone buying these items in the US is unable to gain good title to them because they are the property of Mexico. HOWEVER, I can’t prove it in a way that would result in a seizure order. While it is logical to say “there is no other possible pathway for these things to exist outside of Mexico”, the police need something more than that. They need proof that the object was certainly in Mexico after Mexico declared it to be national property. Or they need proof that it entered the United States in violation of the treaty between Mexico and the US on this topic. Or they need proof of some other crime, such as a false customs declaration. Basically they need photographs or testimony or an Interpol database entry, or some other record of the crime.

The problem is that the very act of illegally removing an artefact from the ground (where it has rested for hundreds of years) and smuggling it covers those crimes. How can I prove that a specific ancient object was in Mexico after a certain date when it was disinterred clandestinely and moved out of Mexico illegally? How can I show that a crime has been committed?

Thus none of these articles state that the District Attorney’s Office of New York, the city where this sale is taking place and where these antiquities presumably are, has been notified. DANY is very interested in the topic of antiquities trafficking and has a whole unit focused on art crime cases. However there is nothing here for them. No grounds for a seizure order. Nothing for them to do but express their frustration as well. They are used to that frustration.

Which brings us to problem three:

Several of the Mexican press pieces have pointed out that this is just one of several recent Precolumban art sales. Indeed, as someone who has watched this market for years, and who has looked at a photo literally every single Precolumbian object that Sotheby’s has offered for sale since the 1970s, there’s nothing different or special about this sale. This looks like every other Precolumbian sale that is 100% stolen goods but 100% unactionable. The source country protests, there is a little flurry of press, the auction house ignores it entirely, the items are sold. Same old, same old. I would love for this pessimistic view to be proved wrong in this (or any case), but I’ve been around this auction block a few times.

The marketers of Precolumbian material are well aware that there is nothing that Mexico, DANY, Interpol, or I can do to stop the sale of these kinds of pieces. The lack of actionable evidence for the police shields the shameful purchase of stolen goods. The lack of provenance information allows buyers to fantasise a situation where maybe this one piece is legal after all because, who knows? It isn’t legal, no objects are like that, but the lack of actionable information allows this suspension of disbelief. Plus I don’t even know if most buyers of this stuff even need to suspend disbelief. They don’t care. They never have. There’s no awareness to raise.

So I’ve got a Master’s and a PhD from Cambridge focused on Precolumbian antiquities. I do identifications of them for the police, customs, governments, and so on. I know this stuff. I think anyone spending money on these is a rube. An idiot. They are wasting their cash, falling for a scam. Why?

Because I think some of the so-called Mexican objects for sale in this Sotheby’s auction are fakes.

And I’m not going to tell you or anyone else which ones I think are fakes.

While the market may not care about legality or ethics, it certainly cares about authenticity. Say what I will about the masterwork of many of Mexico’s local antiquities forgers, the market wants to buy they authentically old. Buying a fake antiquity is burning money: one doesn’t get to commune with the real ancient past and one doesn’t have an investment. Provenance histories for these objects, when they are there, are meant to be authenticity markers: “these people thought this was real, what a great pedigree!” It is advertising material that is meant to make up for the fact that, again, the very crime that brought these things to market and obliterated evidence of crime, also obliterated evidence of authenticity.

You only know an artefact is real when it comes out of the ground…but you can’t sell an antiquity alongside photographs of it being looted because, well, that’s when DANY can get a seizure order and kick down the door. Thus buyers are left in this murky area where authenticity is gauged by placing trust in someone else’s expertise. The auction house has a financial stake in convincing someone to buy the thing, I honestly don’t know why buyers trust them. Probably a misunderstanding of the house’s obligations in this area (lawsuits, lawsuits). But the market is disrupted by doubt, authenticity doubt. Doubt that we experts, and indeed Mexico, should sew.

I talk about this a bit in an article I wrote called Value and Doubt, but Mexico has previously done the “there are fakes in this sale, we won’t say which ones” thing in the past. I love this. It’s sort of a “we can’t shut you down, but we can ruin your fun”. Buyers, then, have to deal with the idea that the undisputed world experts on Mexican antiquities think there are fakes in the mix, but will not clarify. Buying any object in the auction becomes a risk.

Of course this only works when the statement is serious, if we say it when we don’t mean it, it’s a ‘boy who cried wolf’ situation. So let me be clear: I seriously think there are fakes for sale in this auction and I think most Precolumbian art experts would agree with me.

I think a bunch of suckers are going to end up buying these fakes today, along with some other people who are going to walk away, happily, carrying their stolen authentic spoils.