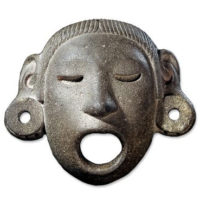 [note, the pictured object is not the object I discuss below]

Fakes abound on the art market. Ask any archaeologist or art historian. Give a specialist a little while to walk around (nearly) any art fair or cruise (nearly) any dealership online or in person, and they can come back to you with a list of likely fakes. I see numerous fakes for sale as real in any given day. Prof Erin Thompson documents her own daily fake discoveries Twitter under the hashtag #BadFakeOTD.

I think there is a lot of interesting sociological research to do on fake antiquities and art. For example, I am drawn to the question of how much do those peddling fakes really know. While not all people who sell art are specialists in all (or any) of what they sell, some are and when I see suspect works being sold by people who most certainly should know better, I wonder if they, well, do know better. Or at least suspect something. Does selling the piece then become a practice of not asking the wrong questions so as to not know too much information?

Very few dealers of ancient art would admit to selling pieces that they were suspicious about, let alone selling what they knew to be fakes. That would be professional suicide. Yet there are a number of anonymous survey techniques that aim to convince people to give more truthful answers to shameful questions.

I recently took a survey for Netherlands-based academics about the prevalence of academic dishonesty among researchers. The first portion of the survey used straight-forward and traditional questioning about things like falsifying results or withholding negative evidence: questions that ‘offenders’ are likely to lie on. The second half of the survey used a variation of a technique called ‘Randomized Response” to try overcome respondents tendency to lie about shameful things. They made a whole video to watch about it, see it here.

What would we see if we did a randomized response survey of art market actors focused on such sensitive subjects as selling fakes? I really don’t know, but I would love to find out. This could certainly be part of a PhD project that I and my colleagues would love to supervise…

The reason I was thinking about fakes within high-end antiquities sales this morning is because TEFAF (the ‘art fair down the road’ for me now that I live in Maastricht) is hosting “TEFAF ONLINE” right now. TEFAF, like all art fairs, is having a rough year, from shutting early in March[1] to ongoing questions about the feasibility of an in-person show in 2021. The online format is an interesting attempt to keep people interested in the art market while they sit at home all day.[2]

When I logged in, I instantly searched for all the ancient art, intending to take a particularly long look at the objects in my specialist area. I expected that there would be very few of them and I was right. Almost none, but what was there caught my eye. I’m not going to link to the piece in question because I, very obviously, have not seen it in person and I don’t want anyone to sue me, but a number of iconographic featured on the object seemed suspect. First thought: fake.

Looking at the provenance, it has only been displayed at sales events, and seems to have been on the market for years. The only provenance date offered by the seller is “since 1964″[3], meaning that no proof is offered that the piece left its country of origin before that country banned such exports. This to me seems like a violation of TEFAF Online’s guidelines, but there is enough ambiguity in the guidelines to let nearly anything slide:

The committee will check whether or not the object was, at some point in
its history, obtained contrary to national or international law. The object will not be accepted if the provenance is not sufficiently proved.

I am guessing that is being interpreted as the object will be nixed if there is proof it was obtained contrary to national law, but the object won’t be nixed is there is no proof that it was obtained legally. It isn’t for the seller to prove the object is legit, it is for someone else to prove it isn’t legit. Backwards, but expected. Terrible for consumers though. This is how fakes enter the market. Think about it, you have a piece with no provable date or place of origin, you have it only displayed in commercial settings, you have the market not going for it for creeping up on a decade, and it is from [redacted country] which has had a healthy antiquities faking culture that has been documented since the 19th century. The piece itself is of a general type that was very popular to fake in the 1950s and 60s, the time period of the sole provenance date.

Meanwhile, to an archaeologist’s eye, the piece itself is problematic. I hesitate to assert expertise here because the piece is not purported to be from a culture that I have directly worked on. However, I am familiar with both excavated and market pieces from said culture, and I am going to say it: the breasts are weird. They are straight-out, big, round Barbie doll breasts with giant round nipples. They are a modern idea of “breast”, not an ancient one. Breasts depicted in the culture in question, as well as contemporary regional cultures look very different. These breasts look like they were made for a 1960s market.

Indeed, the only comparable breasts I’ve been able to find is on a piece that was donated to the Israel Museum in 1977 by American collectors. It is presented as being a possible companion piece to the one for sale at TEFAF (the dealer suggests they were stuck on to the front of the same pyramid…). I suppose that this comparison to the object in Israel is meant to provide support for authenticity of the object for sale. Yet it makes me even more suspicious. They look like they came out of the same faking workshop. The type of faking workshop that has, again, existed in said country since the 19th century, of which ample photos abound.[4]

The object is made of a material that can be dated using thermoluminescence. TL dating is far from perfect, but it is a start. No TL date or any other scientific testing is offered with this piece, although it might be available on request of course. But, then again, if you have a good TL date, why wouldn’t you brag about it? TL dating costs about €500; this piece, though presented without a price tag, will be priced at something over €100k, maybe a lot over. It’s hard for me to place a price on it for many reasons.

So here’s the rub: the gallery selling this piece specialises in objects from this greater region. I would assume they both see what I see, and can internet search what I internet search. Are they cool with this? Or is “from the collection of an expert and identical piece in a museum” enough for the market to stop asking questions? Perhaps I’m wrong on the piece. I don’t know.

I wonder how the dealer (and all dealers) would respond in a randomized response survey.

It would take very little work to find the piece I refer to here. I would prefer that you did not do so but I cannot stop you. I would like to stress that I am not saying that the piece IS a forgery. Rather there are issues with its provenance and its iconography that deserve further discussion, and probably some scientific testing. It is also important for me to say that if it IS an authentic piece, it almost certainly left its country of origin illegally and thus should not be on sale at TEFAF unless the dealers can prove otherwise, which I am sure they cannot.

[1] I was at the Friday preview of TEFAF, and it was officially the last normal human thing I did, and as normal human things go it was not very normal. I got quite ill in the week(s) after TEFAF, with a cough so bad it kept me up all night for a week, but these were the days when if you didn’t have a fever you didn’t get a COVID19 test, so who knows. I suppose if I was going to get COVID19 anywhere, it should be an art fair.

[2] My research at TEFAF this year was focused on human/object connection and how those connections were formed through staging and interaction with objects. Who was invited to touch, and when and why? etc. The online format is totally different from the physical connection forming activities I watched at TEFAF. It really must be a different thing.

[3] A bit upsetting, googling the name of the person who was meant to have collected this piece in the 1960s, it is a person who was an expert in the academic side of the field. Seemingly at least, the work is in French and I’d have to work at it to read it. Weirdly the person actually has a hyphenated surname and the dealer leaves the first name of the hyphenated surname out. On the dealership website the dealer only says that the provenance is an “Ancient European Collection…”, no name. Maybe 1964 is “ancient” these days?

[4] It is taking all my strength not to point out what piece this is, mostly because with a bit more research I believe I may have found the “authentic” piece that partially served as an inspiration for the pieces in Israel and on sale. The piece, located in a regional archaeology museum, is smaller, has totally different regalia on and is in a different pose. It also has remains of paint on it, absent from the suspect ones it seems. However, the figure is bare breasted (although the breasts aren’t “Barbie boobs”!), with eyes closed and mouth open, similar to the suspect ones. Closed eyes/open mouth/breasts don’t seem to be the set iconographic traits of this deity. I’d say the fakers (who, of course, may not have intended what they made to ever be considered ancient) went to the museum and got some inspiration. Sadly the museum website doesn’t say when the piece was registered in the museum. The listing of the object for sale does not mention this piece. It is fairly famous.