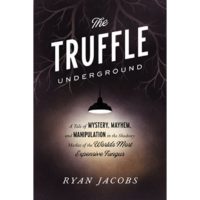 The Truffle Underground: A Tale of Mystery, Mayhem, and Manipulation in the Shadowy Market of the World’s Most Expensive Fungus
by Ryan Jacob
2019, Clarkson Potter

Art crime doesn’t exist in a vacuum and thinking about parallel crimes has the potential to inform our understanding of both phenomena. The question is, then, what crimes are parallel to art crime?

There has been some discussion about the suitability of comparing, say, antiquities trafficking to trafficking in arms, drugs or people. I can’t say that I have ever found those comparisons to be particularly enlightening. The source, destination, and ultimate use of the commodities are so vastly different that I can’t see where the information crossover really is. In my current project, I’m looking at the comparability of antiquities trafficking to trafficking of fossils and collectable wildlife: rare things that seem to have much more in common with each other, including at times common dealers and consumers. We’ll see what is there.

But how about “fine art” crimes: fakes, frauds, and thefts within a market developed for the conspicuous consumption of a connoisseur’s commodity by the ultra elite? I think the interesting parallels are found in similar elite goods and the structures that bring those elite goods to market, as well as the social position that engaging with those goods engenders. What are parallel crimes to art crime then? Wine crime. Whiskey crime.

When I told my partner I was reading a book on truffle crime, he said “that sounds like you.”

As someone with zero truffle experience, The Truffle Underground proved to be an engaging and informative introduction to the genus Tuber and its prized and not so prized species. I learned that there are many kinds of truffles that are found all over the world. A subset of those are edible. A small subset of that subset are any good. “Any good” is not just a matter of species, but a matter of culture: there is a passionate insistence that truffles found in certain regions of France and Italy are the best alongside the idea that the magic of certain soils changes the taste of truffles that are of the same species. So according to the truffle.farm “Truffle Price Tracker“, the 2019 retail price of Italian Tuber mangnatum, the much-prized white truffle, was $7541.5 per kilo. A Croatian white truffle costs quite a bit less, but would genetically test as the same thing. What happens when we have two largely indistinguishable commodities that have vastly different prices? We have almost an irresistible opportunity for crime.

While The Truffle Underground certainly discusses property crime in the form of theft, and violent crime, including dog poisonings and even a human death, most of the book (and most of my interest) was focused on truffle frauds. Author Ryan Jacobs visits the primary truffle regions, interviews key players in the truffle supply chain, and examines where and why truffle fraud occurs…which somehow makes this book sound dry and it most certainly isn’t. Rather the author weaves past and present together to consider how a practice that was developed literally at the periphery of society, in the margins, in the grey area, retains an illicit quality to this day.

I can’t help but think that Jacobs chose the right commodity to investigate. Through all of his travels and interviews, he is treated to beautiful meal after beautiful meal by his interviewees, with truffle shavings heaped on top of all of it. I’m hungry again!

[Here I took a break to have a filling but ultimately unsatisfying homemade pasta lunch. No truffles were involved.]

Throughout the book the author underscores the social parallel between truffles and art. His perceptions of truffle processes and processing were described through art metaphore:

Truffle cleaning is the creation of art: “The women had the same stern focus of sculpture artists putting the final chisels into their marble masterpieces. They stared down, picking and brushing and turning the truffles until the dirt was reduced to crumbs…”

Truffle cleaning is art restoration: “She compared the delicate process to the restoration of a fine painting. In a way, they were brushing the dirt layers off the truffle to give consumers the highest experience of the art”

Pricing truffles is art connoisseurship: “Broken pieces of white truffle are not nearly as valuable. In that way, pricing a truffle is not unlike evaluating a fine artwork or jewel, checking the canvas or surface for structural flaws”

Even more exciting (for me, that is) were passages where the author’s insight into why wealthy truffle consumers are willing to buy the narrative that their truffles were both elite and legit. Substitute “truffle” for “artwork” and you have a fair critique of the art market’s propensity to sell a story to cover fraud, and the reason why art buyers fall for it:

Buying an authentic, whole Alba white truffle allows an aristocrat to demonstrate that, contrary to belief, wealth can buy some measure of happiness as long as sensory ecstasy and experiential beauty are what you desire. This is something rich people like, and pay, to think. But the rich who pay to think such things can also be unwilling to ask questions that rip them from a predetermined understanding of what money makes possible.

“To buy the best of an already extremely rare product, you must submit to the suspension of disbelief. The allure and romance of the luxury have a way of erasing objectivity. The truffle middleman sells a product, but he also sells a story, the one that places the buyer on a hill, in a thicket of oaks that sprawls towards the Po River. Those who can afford to buy white truffles often do so without interrogating the architecture of this narrative.”

Yep. Those are going in the “quotes to use” file.

All told I found The Truffle Underground to be a thoroughly researched and artful window into a form of elite crime that I hadn’t previously considered.