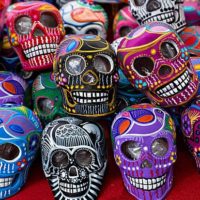 Where do skulls sold online come from?

Towards a Method for Discerning Sources of Supply within the Human Remains Trade via Patterns of Visual Dissimilarity and Computer Vision
by: Shawn Graham, Alex Lane, Damien Huffer, and Andreas Angourakis
(2020) Journal of Computer Applications in Archaeology
Paper available here.

Look, folks, the internet is a dark and terrible place. We know from previous work by the authors of this article that there is an active, disturbing trade in human remains online. The obvious question one asks when presented with that fact is: “where do the bones come from?” We don’t know, but the answer is important.

It is fair to assume that human remains are sold without the consent of the deceased, and probably without the consent of their family members. The likelihood that some form of illegality occurred between death and “sale of skull on Facebook” is high. There’s a good chance that these online bone sales are the public face some extremely disturbing and/or illegal acts here. Is a cemetery (ancient or modern) is being looted? Is a certain group of people is being exploited by oppressors, their bodies literally sold after their deaths? Is there some sort of gruesome undertaker fraud going on (not unprecedented)? We need to know where the bones are from.

Yet investigating the source of the human remains for sale online is notoriously difficult. Who was this person…who loved them…who loves them still? When all you have is a photograph of a skull, where are you going to start? I might have come from anywhere in the world. That’s where this article comes in. This article is a start.

This paper presents the results of using image analysis by neural networks to detect patterns among skulls offered for sale online. “Patters of difference” is the term that the authors used. They note, “While it is easy to slip into a habit of thinking of the approach, and the results, as saying something about the skulls themselves, we must always remember that the approach is exploring the web of differences of the images”. The method more or less measures what the network sees as important dissimilarities between a skull for sale online and a series of images of skulls that are from a known origin. The authors sum this up as: “instead of saying what something is, we [the authors] are saying what it is not“.

And what are many of the skulls for sale online “not”? They are not what the people selling them say they are.

The authors (and I) urge caution, though. We aren’t dealing in truths here, we are dealing in probabilities, in asking more questions. Perhaps what this method is good at is not showing, exactly, where an individual skull came from in the world, but rather indicating who we should be questioning and what questions we should be asking them.

For example, take these findings:

“…it seems that skulls with an Indigenous North American ancestry are circulating in this market far more than vendors either know or let on: indeed, vendors are often quite careful to state that they would never knowingly trade in skulls from Indigenous groups… More skulls are claimed to be Asian than what the model predicts, as the historic trade in bodies from India and China perhaps provides ‘moral cover’. According to this model, none of the purportedly ‘europe’ skulls can be so classified.“

Do I have questions to ask these bone traders? Yes I do.

The sale of human remains online gets a great big provenance pass. Most of our laws, most of these online platforms, and apparently bone buyers do not require human bone traders to prove where these pieces of once-living humans came from. On the face of it, we really shouldn’t be okay with that, no. And as the authors have shown, a deeper dig into this trade reveals strong evidence for deception regarding the sources of commodified human body parts.