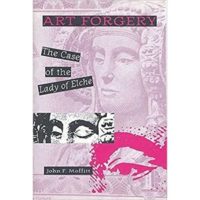 A fascinating case made boring

Art Forgery: The Case of the Lady of Elche
by John F. Moffitt
1995, University Press of Florida

I rarely write negative reviews because I rarely feel negative about the books I read. If a book has made it through topical filters to get to me, and if I bother to read it, chances are I am going to get something positive out of it. I respect the work people put in to books and I can appreciate that books have a range of audiences and purposes. I’m a compulsive five-star-er.

All that said, I didn’t like “Art Forgery: The Case of the Lady of Elche“. So much so that I didn’t really read the whole thing, concluding with a skim that didn’t even make it to the end of the book. I can’t quite see who this book is for, and I think you probably shouldn’t bother with it. Move on to something else. Stop reading here if that is enough for you. Otherwise, read on for what I didn’t like.

“Art Forgery: The Case of the Lady of Elche” is one of a particular genre of art crime books: the take-down. These books tend to focus on one well-known museum object, and through an exploration of the style, provenance, and scientific aspects of the piece, make the case that the piece is not authentic. The first book I read in this genre was “Mysteries of the Snake Goddess: Art, Desire, and the Forging of History” by Kennith Lapatin shortly after it was published in 2003. Only two years before, Lapatin was the instructor of my undergraduate course in Greek Art[1], and it was in that class that I learned that things in museums are not always what they appear to be, or what we expect them to be. It helped that the class was taught partially in the galleries of the Museum of Fine Arts Boston, surrounded by loot and, as the MFA acknowledged basically while the class was happening, fakes. It was a formative experience for me and I liked the book that went along with it.

Also in the “take down” category is “Breaking van Gogh: Saint-Rémy, Forgery, and the $95 Million Fake at the Met” by James Grundvig, which I could have sworn that I reviewed for this blog, but can’t find any record of. The book has so-so reviews on Amazon, and it all could be totally mad, but I enjoyed reading the book. For the most part, I’m willing to go along for the ride. I learn things.

So I was revved up for “Art Forgery: The Case of the Lady of Elche“, which is one art historian’s take-down of the famous Dama de Elche which surfaced in Spain in 1897. To me, a total non-expert on Spanish archaeology, she looked way too modern to be authentic. I was primed. I was ready. “Alright John F. Moffitt”, I said, “make your case!”

I know this is a book put out by an academic press, but just because it is meant to be some sort of academic work, doesn’t mean that narrative structure can be tossed. Good gosh, think of your poor readers who are trying to stay awake with a book after a long day taking care of a toddler. You have a problem with your book if you haven’t even told the story of the discovery of the alleged fake by the halfway point. I found myself skipping large chunks of chapters to get to the storyline but never found it. What are we even talking about here? Gosh I don’t know. Flip. Skim. Yawn. I’m going to bed.

Beyond just not having a narrative, the author did three things that really bother me in any book. First, the author uses “he” as the default gender for generic people. The generic public prosecutor is a “he”, the generic forger is a “he”, etc. This book was written in 1995 not 1925. Anyone who uses “he” in that way deserves to be called out and potentially dismissed. It isn’t just sexist, it’s sloppy.

Next the author is the sort of person who uses multiple languages in-line, with no translation, for the sole purpose of looking smart. Yes, author, I can speak Spanish and French too, but to assume the reader of an English Language book can do that is elitist. You know what I can’t read? Latin, and I don’t know what he was saying in the untranslated Latin bits. This book was written in 1995 not 1795. Anyone who builds such an ivory tower in their academic writing that those of us lower down in that tower can’t even participate also deserves to be called out. Elitist writing can take a walk.

Most importantly, I don’t like that the author employs sassy asides and trying-to-be-witty zingers while attempting to argue his case. The careful unpacking of the assumed authenticity of a well-known artwork or antiquity requires kindness and care. To challenge what others believe in and, indeed, to directly challenge the scholarship of other academics, one absolutely must not be a jerk about it. Sharp little linguistic jabs aimed at other scholars will not win anyone over to an alternative way of thinking. Trying to characterise believers as stupid and deluded while belittling them with poor puns doesn’t help Moffitt’s case. Being mean never makes one look smart, it just makes one look pathetic.

Also, for serious, in all his punning and sassing, Moffitt never once makes a joke about a bust that he says is fake being found in a place called “Illici“. Seriously? One letter away from “illicit”, and instead he chooses to pun with “the eyes have it”, twice? Come on.

So about 150 pages in, I gave up on Moffitt and the book. At that point I still didn’t know the story of how the Dama de Elche was found, I didn’t know the story of it being taken to the Louvre then being repatriated to Franco’s Spain, I didn’t know how far beyond “stylistic” Moffitt’s argument went, and I didn’t want to go on. I was, however, motivated to see how Moffitt’s 25-year-old argument has withstood the test of time and the onward-chugging of archaeological science.

The answer is “not good”. My extensive (read: Wikipedia) research on the topic indicates that scientific analysis in 2005 turned up trace ancient pigments on the piece, which would be an impossible thing to fake in the late 1800s. Further research in 2011 turned up what appear to be particles of human cremation remains inside the back compartment of the bust (which everyone thought was a funerary urn anyway). Again, shoving those in in the late 1800s would be pretty weird. It may be that Moffitt was the only person ever seriously making claims of forgery. I’ll leave that one to the Iberian archaeologists out there.

So, again, I didn’t like this book and I don’t see much use for it. Authors out there, by all means write solo biographies of your favourite fakes: I’ll buy each and every one of your books. Just don’t write a book like this.

[1] I got an A, and he wrote me a recommendation for my first job, thanks Prof Lapatin! Wait, do I get to call him Ken now? That seems weird. I wrote an email today to another undergraduate professor of mine (the legendary Clemency Coggins) and called her by her first name. It felt strange. My deferential respect for these people is still so strong…