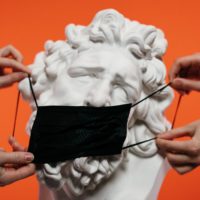 Thoughts on starting an empirical research project during global upheaval

As weeks of social distancing roll in to months, and as life becomes more and more proximal, nearly all of the patterns that constitute our social life have changed. The pathways we follow are altered. The networks we belonged to have fallen apart or fundamentally change. We consume different things in different locations in different ways. We don’t interact with the people and the objects we used to. Nothing is like what it was before, and it may not be like it was ever again. Everything is new.

In January I moved to Maastricht University to start up a 5-year project focused on the networks that certain types of collectable objects (antiquities, fossils, and wildlife) belong to as they move through space and time: a project about how the objects “transform” during interactions with people and places; how they may act as agents with agency or, at least, agentic qualities; how networks grow around them; how these transformations, these agentic quality, and these networks relate to crime. This project employs a a multi-sited ethnography that spans the globe and 4 years of the project, that was see 3 senior researchers ‘follow the thing’, observing transformations and interactions at source, during transit, and in market contexts. Fieldwork was to start soon on our “source” year. In my last days physically working at my desk in the Maastricht University Faculty of Law, the first couple of days of March, I was signing paperwork to help dig up Tyrannasaurus rex fossils in Utah this year, with leads on other projects to join in Oklahoma, Montana, Florida, and Argentina. I was also starting to make some connections with market actors who are, understandably, weary of a criminologist poking around, with total transparency being my goal.

But now everything is new. Uncertainty reigns. I must ask myself not only if my project as planned is even possible, but if what I planned on studying is still there.

Is my project possible as planned?

I know that the majority of people who conduct empirical research wake up and go to sleep with this question at the centre of their thinking. Carefully considered methodologies crumble when set against requirements to social distance and restrictions on travel. Tight research budgets cannot contend with having to both pay researchers now, and extend their contracts past the proposed stop date of the project. Budget lines for travel expenses cannot withstand the likely increases in the cost of airline tickets. Insurance? Is that even possible now?

Looking at my project plan, up to three months of fieldwork in each of four years for three researchers, across as many countries and continents as we wish is now impossible in our new world. Even if a vaccine is developed in a year or two, allowing free travel again, we’ve lost years on the project. No matter what, I don’t see any way for my project to do the amount of fieldwork originally planned.

This means it is contingency plan time. I’ll be spending coming weeks considering if, perhaps, a digital multi-sited ethnography is possible; if “things” can be followed virtually when they are not virtual things. I’ll be weighing this against the possibilities for switching to a more “strategically sited” multi-sited ethnography, that weighs much more heavily on desk-based research and other documentary evidence, using shorter fieldwork trips to fewer locations at a later stage in the process as sort of a confirmatory/contextualisation step. Perhaps both can be combined. Neither is what I have planned on or prepared for. There are a lot of implications to think about.

Is what I am studying still there?

If I wake up and go to sleep thinking “is my project still possible as is?”, the question that wakes me in the middle of the night is far more complicated. Do the phenomena and relationships that I want to study still exist?

As I said at the start of this post, the core of my project is to study how marketable and collectable antiquities, wildlife, and fossils function as agents within networks, including networks that involve crime. Yet these networks, these relationships between people, places, and things (and people and people, and things and things, etc) have changed…at least for the moment and maybe forever. People and objects can’t move like they used to, they can’t interact like they used to. Legitimate pathways of movement for these objects have certainly been shut down; illegitimate pathways of movement for these objects probably have been shut down as well. If they come back, things will be different: businesses associated with these objects may fail; public funding may falter for preservation activities; consumers may have less disposable income; decreased flights and other forms of transit might reduce movement/trafficking pathways; increased security to prevent a virus from crossing borders may prevent all sorts of things from crossing borders. Now everything is new.

If I start an observational project right now, will I be recording noise and upheaval rather than how things ‘really are’? Any social research is only a snapshot of a particular moment in time and a particular context, sure, but is this moment so very strange that data collected in the wake of the world ending is not applicable to situations outside of this unique moment?

I suppose I can’t know until I look. I can’t consider the data until it is collected. The data should drive, not speculation. Perhaps being able to reflect on networks breaking apart and watch networks reformulate in real time is an advantage, not a setback? Perhaps that’s more interesting than what I was meant to be observing in the first place?

But, of course, a new world and a shift in focus requires new thinking and a shift in methodology (see the previous section), and we simply can’t even begin to speculate what is possible at this point.

I’m currently finding it very difficult to do substantive work on my project. That is not to say I am not working on my project, but tangible actions towards deliverables are not possible with uncertainty that is hanging over all of us. For example, I cannot prep for excavating T-rex in Utah by conducting pre-interviews, collecting documents, analysing laws and literature, and setting up meetings etc because I don’t know when (or if; or if it should) that fieldwork will take place.

I’m left with planning, at a project level, for the possible outcomes of this global crisis. It is deep, slow, quiet work, with little to show for the mental work at the end of the day. At times it feels like I am doing ‘nothing’. I know that isn’t the case, that this thinking+planning is necessary, but it is so much less satisfying than data collection. In February I had a tantalising taste of what I thought my next 5 years was going to be and I was enjoying the build up to fieldwork and analysis. Now I’m back to the cerebral place that I needed to be in to write the grant proposal in the first place.

I am fully confident that good work will come out of this. Blah blah, Sun-Tzu, chaos=opportunity. I know there’s room for methodological innovation (e.g. digital multi-sited ethnography…) and capturing of exciting empirical data (e.g. real time network reformulation; consideration of network resilience). I have the funding in place, the time set aside, and a great team for it. This will work out in an interesting and unpredictable way. Yet right now as I plan with what information I have and wait for more information to develop, I’m feeling the ‘unpredictable’ much more than I am feeling the ‘interesting’.

And so how are you?