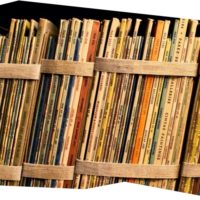 This week I’d like to try something new on Anonymous Swiss Collector. Today will be my first (hopefully not only) “Auction Review”. Here’s my thinking. For crazy reasons, I have hundreds of historic antiquities/cultural object auction catalogues in my office. My students, my colleagues, and I use these for research purposes, but at times I just sit around and browse them for interesting objects, statements, etc. The other day I thought, why not take my browse to the blog? Thus every once in a while, when I find a spare moment, I am going to pick a random auction catalogue from out of the boxes and tell you what I notice about them. This isn’t exhaustive analysis folks, just an invite to come along with my browse.

And as if by fate, and I swear I didn’t rig this, this just happened…the catalogue that I randomly pulled out of the box is:

So first thing’s first, this catalogue has a price list in it. Price lists are sent out to catalogue subscribers after an auction is completed so that they know what lots sold for. I guess this is a marketing device, it encourages customers to come forward with lots to sell or to engage with the next auction because “I can afford that”. The convention of sending these out means that researchers like myself know what was paid for each piece.

Often auction catalogues in archives do not have the price list with them: someone has to physically put them there and they have to not, you know, fall out. This price list has been stuck in for 37 years. I’ll stick it back in when I’m done.

First interesting bit: at the start these are listed as being property of, among a few other names, Mr John Huston. Wait…THAT John Huston? The John Huston that directed The Maltese Falcon, noir-est of illicit antiquities films? Let’s assume yes without much evidence because that makes this sale cooler.

Also on the block, the collection of the late James T. Hooper (Sold by Order of the Administrators). According to Wikipedia, “collecting was his obsession”, and this sale is mentioned as well. As I know nothing about Oceanic collecting, his name is new to me, but I’m sure others out there know him well.

The first lot of this auction is a bit of a surprise. It is lot of 41 auction catalogues, many of which I have in my collection here. The lot went for £108 (£384 adjusted) which shows that I’m sitting on a mini goldmine with these catalogues. It’s worth mentioning that in the past, not all lots were illustrated in auction catalogues; too costly I suppose. That’s unheard of today, but there’s no hilarious picture of a stack of 41 catalogues in this catalogue or anything. Sad thing about a lack of photos is that one doesn’t get to see gems like lot 3 here: a mask said to be from Malawi but also maybe from Siberia or Taiwan, sold for £86 (£306).

The first section of the catalogue is African art which I know basically nothing about. I do know that lot 34 was acquired literally through murder as proudly announced in the catalogue, though Christie’s notes that “this colourful account [of British horror during the 1987 Punitive Expedition] is not necessarily reliable”. It is a great catalogue copy, though, and the piece sold for £346 (£1230).

At lot 80 we get to the stuff I know a thing or two about: “The Americas”. Interestingly enough this is where we start with items that are “The Property of Mr John Huston”. See this makes me think even more it’s *THAT* John Huston. First, because I can make some sort of Treasure of the Sierra Madre joke in my head about him collecting ancient Latin American material. Second because Hollywood was a hotbed of early collecting of ancient American material. And you know what, Wikipedia tells me he had a notable collection of Pre-Columbian Art, so yes, it’s that John Huston. Let’s see what you bought, John…

Ok huh, only Lot 80 was his…a gold Chimu thing-doo that didn’t even sell though they paid out for a colour plate for it. And that’s it for Latin America. After that we plow right into the collection of “George Simpson, Governor of the Hudson’s Bay Company’s Territories”, scrimshaw and Northwest Pacific Coast Indigenous stuff.

Now here’s a teaching moment. Lot 138, a Maori canoe stern section said to be carved by Rukupo. Note down at the bottom of the description. At some point, Irene there converted this canoe stern into a section of a support for a table. Remember, folks, the market is not preservation and a private collector is not a museum. Once you buy this stuff you can do what you want with it. Taonga table? Sure.

Moving swiftly along, lot 143 comes with a colour photo and a whole page and a bit of story. Jeeze they are REALLY trying to link this Hawaiian guy to Lord Byron, while carefully saying they don’t know if this was looted by Lord Byron, but it is totally possible that it was, so buy buy buy? It worked, this Byron story: this piece reached the (tied for) second highest price in the auction: £18,360 (£65,286). Look on my works, ye Mighty, and despair!

On the same note, this paddle looks enough like a paddle that Captain Cook took for them to say that he is “probably” the provenance. That worked too, it sold for £9720 (£34,563).

And that’s that! What did we learn from the ‘Donna Yates Naissance “Tribal Art”‘ auction that celebrated my coming into existence 37 years ago?

What do you think folks, more of these reviews in the future?