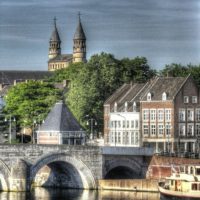 The New Year is a time for renewal and change, and in honour of the starting of a new cycle, I’m announcing a big change. In the first week of January I will be moving to Maastricht University in the Netherlands to take up a post as Associate Professor in the Department of Criminal Law and Criminology, in the Faculty of Law. There I will be associated with The Maastricht Centre for Arts and Culture, Conservation and Heritage (MAACH), and I am truly excited about the research environment there: there’s so much potential for collaborative research and dynamic teaching!

However, I’m leaving the University of Glasgow with a heavy heart. For nearly 8 years now, Glasgow has been my home. The University has supported me through strange (though successful!) lines of research, giving me the flexibility I needed to develop and explore topics of study that were certainly “high risk” but are now clearly “high reward”. My colleagues at Glasgow are spectacular and I truly enjoy going to work every day if for no other reason than to be around them. And the teaching I’ve been allowed to do at Glasgow has been a dream: I’m proud of the programmes that I’ve created, and the students who have come through them are world-class. At Glasgow I’ve been able to teach my research and only teach what I love, and bring students into that research in dynamic ways. University of Glasgow is a great institution and I am sorry to be leaving it.

So why am I leaving? Brexit. That’s right folks, I’m one of the academics directly affected by the UK leaving the EU. Simply put, all my research funding comes directly from the EU and I need that funding to continue my work. The UK is leaving the EU and I must stay in the EU.

To make a long story short, I have a €1.5 million European Research Council grant that starts this January. In the event of a “No Deal” Brexit, which could still happen on 31 January, that money instantly disappears. The UK Government has promised to provide matching funding for any European Grantees in that situation. However until very recently they said that this matching funding would not pay for any “foreign beneficiaries”, researchers on the project who work at non-UK institutions, of which my project has two. They changed their mind on that about 5 days before the most recent potential “No Deal” date, but by then it was too late for me and far too risky. I had to move my project to an EU university to save it.

The UK leaving the EU is a complete disaster for researchers like me. The EU has generously funded my research for years and is likely to be my primary source of research funding beyond the 5 years and €1.5 million that start in January. The EU funds the dissemination of my research to policy makers and stakeholders as well, and it is through EU institutions that my work has influence over policy. I do the research that the EU needs done to make good cultural policy. Further, the EU funds postdocs, PhD students, and Master’s students that I teach…and on some occasions, employs them when they’ve finished their studies.

In contrast, I’ve never been funded by a UK Research Council, and I doubt I ever would be. I could yammer on about why, but different funders have different funding philosophies and the type of risk/reward ratio that I tend to work with is unlikely to appeal to an RCUK who can only expect to see less and less government funding support as we move into post-EU darkness and isolation. We’re already at a point where PhD support is nearly non-existent in the UK and loans are being pushed as an answer to a lack of support for Master’s study. On top of that, my colleagues are currently on strike (I’m still on maternity leave) due to our pensions being gutted and due to the explosion of temporary and demeaning academic contracts. It’s hard to image academia in Brexit Britain being anything more than a desiccated husk of what it once was/could be.

Meanwhile, I’ve gone for self preservation, and the preservation of the jobs of the 3 other people on my research project. My family and I are moving to the Netherlands. We will stay in Europe and we will remain European, even if our (still red!) UK passports indicate otherwise.

I feel so very lucky that I have such a great institution to bring my project to. Although leaving Glasgow was not something I had planned on doing, well, ever, Maastricht University seems like the perfect home for my work. The Faculty and Centre are filled with interesting researchers doing good work that relates to my own. Everyone I’ve met is friendly and interested in collaborating. There are great programmes already for students who want to work with me, and there is the possibility of developing more. The TEFAF art fair is there every year so I can conduct fieldwork from my doorstep. The University is run pretty much entirely in English. The city is beautiful. The Municipality of Maastricht is so very supportive of expats that anyone coming from the expat experience in the UK (like me) believes there must be some sort of catch (there isn’t).

That last observation is more important that I thought it would be. Having endured years of “hostile environment” towards immigrants like myself, paid a fortune in visa/residency/naturalisation fees, double paid for the NHS despite having paid in to it since I was 22 years old, and having been told by the government and the media I was a terrible burden on UK society despite having personally brought millions of pounds into the country via external research funding and attracting international students, I wonder now why I stayed. The Netherlands *WANTS* me. Actively. They are giving me a tax break on 30% of my salary for 5 years just as a reward for moving, expedited residency registration (3 days!), and the Uni is giving me a relocation package that is astounding. Coming from a situation where I know that at least one PM would have pushed me down the stairs if it meant reducing her immigration numbers, this is a big deal.

Heck, I actually feel *HOPEFUL* about the future! How many people in the UK can say that?

Now this wasn’t meant to be a screed, but I think I would be remiss if I did not fully explain my position. The situation in the UK is bad. Bad for academics, bad for immigrants, double bad for academic immigrants. It can only get worse. There is no light at the end of the Brexit tunnel. Scotland is my home. I love it and I will miss it, but for me, the Netherlands, Maastricht, and the EU is my future.

I don’t have my new Maastricht email address yet but you can still reach me at my Glasgow address for a while. I’d love to hear from colleagues in the Netherlands, Belgium, Germany, Luxembourg, and, indeed, anywhere nearby. Coffee in Maastricht on me!