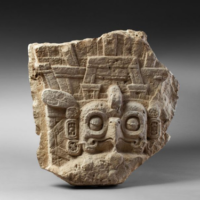 [UPDATE: News is breaking that the piece is being withdrawn from sale so that Guatemala can negotiate with the seller. Not yet a positive outcome, but a step forward]

Once known as “Yo’k’in” or “Great Gateway”, the Maya city of Piedras Negras (Guatemala) boasts some of the most beautiful and complex sculptures of the ancient Americas. The great dynasties that recorded their history in stone at this site were so skilful and thorough that investigation of their monumental writing laid the groundwork for the decipherment of Maya hieroglyphs. The sculptures, known as stela, are giant, exquisite, and legendary.

Yet, because of their beauty, they became a target for unscrupulous antiquities collectors whose thirst for the exotic was greater than their respect for our ancient past or desire for preservation of the shared cultural heritage of humanity. Starting in the 1960s, Piedras Negras was savaged by looters responding to western demand. The devastation of the Maya corpus of sculpture was one of the big pushes behind the development of the 1970 UNESCO convention. Well-known, documented, archaeologically-excavated stela were sawn into easily transportable pieces for sale; they were mutilated for the market and ended up in public museums and well-known private collections. Prof Clemency Coggins, in her famous 1969 article in Art Journal, likened the appearance of looted but famous and documented Maya stela in western collections to “finding your local museum has just bought the Arch of Titus“.

I’m sorry to say that, to borrow her analogy, Paris-based auction house Drouot [EDIT, while this is hosted on the Drouot site, the sale is by Millon Auction House as Drouot has pointed out on Twitter] will be auctioning off The Arch of Titus on 18 September. They are openly and shamelessly selling Piedras Negras Stela 9 for an estimated €25,000 to €35,000. See here (Wayback link here).

Piedras Negras Stela 9 was discovered by Teobert Maler in 1899 and was recorded again by Ian Graham sometime in the 1960s [edit David Stuart points out that Graham recorded the stela in 1974 and that the owl headdress element was already stolen by then. This and other Piedras Negras pieces are discussed in Stuart and Graham’s volume on the topic]. Now, about 50 years later, it has surfaced for sale with the auction house not offering any information about where it came from, who owned it [EDIT BELOW] and why the think they have the right to sell it. And make no mistake, they have no right to sell it. There was no legal way for the stela to leave Guatemala in the 1960s or after. The *only* possibility is that it was mutilated, looted, trafficked, and laundered in to a market that didn’t and perhaps still doesn’t care.

Indeed, the auction house does not even acknowledge that this is Piedras Negras Stela 9, calling in to question any assertion that the auction house might make that they undertook appropriate due diligence before accepting this sculpture for sale. Harvard University’s Peabody Museum has had photographs, drawings, and descriptions of this Stela up on its website for years (maybe decades?), and *ANY* Maya expert and *MANY* Maya enthusiasts would have been able to link this fragment to Piedras Negras Stela 9 quite quickly. I can only conclude that either Millon didn’t want to know the illicit origins of this piece or that they were well aware of the sculpture’s dark past and didn’t care.

Sadly this desecrated fragment of Maya artistic achievement goes on sale 8 short days from now on 18 September 2019. There isn’t much time. I know that Guatemala is keen to stop the auction, and I know that it seems like this should be straight forward, but French auction houses are notoriously resistant to, well, the law and ethics regarding looted cultural objects. What we *CAN* do is publicise this case and make it clear to any buyer that they are likely to face a legal challenge and possibly seizure if they go through with this sale. Let’s get the word out. Thus:

Any media outlets or journalists out there who would like more information about this case, expert quotes from me or others, photos, or contact info for Guatemala’s representatives in this matter, GET IN TOUCH WITH ME. Yes, I’m on leave, but I am open and ready to talk about Stela 9, the rape of the Maya heartland by looters, and how sales such as this one rob us all of our shared past.

{EDIT} Since I posted this I bothered to click on the French version of the site and there is more provenance information available. It says: “Provenance : Ancienne collection Pierre Langlois, Paris, Mai 1965. Acquis auprès de Earl Stendahl, années 60.” I know Pierre not, but I sure know Stendahl. This is not his first dodgy piece by a long shot. Stendahl’s gallery records are in the Smithsonian Archives of American Art in Washington DC. If anyone in the area wants to head over there and see if they can find documentation of this sale in the archives, I’d be happy to help from afar and would love to see what you come up with.