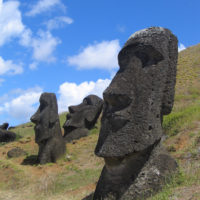 You have until 25 March to voice your support for restricting the import of looted and stolen Chilean and Jordanian antiquities into the United States. The US State Department is calling on everyone, from experts to interested members of the public, to comment on this important international agreement. I beg you to consider uploading your thoughts. Please pay attention to what I said about subjects to comment on regarding previous MoU committee meetings: you MUST focus on those topics and not on others.

Please see my post: Comments Needed on Proposed Cultural Property MoUs between the US and Chile, Jordan

Due to my maternity leave I was only able to write a very short letter, but I am happy share it with you here. To post your own, go to: https://www.regulations.gov/document?D=DOS-2019-0004-0001

I am writing to you today in support of the proposed MOU between the USA and Chile concerning import restrictions for certain archaeological and palaeontological material. I believe that import restrictions on Chilean cultural and palaeontological objects will serve as an important point of defence against the illicit and illegal trafficking of such items and will help protect all of our cultural and natural heritage.

I have spoken to the committee in person during the last two renewals of the US/Bolivia MOU. During both occasions I stressed that ancient borders do not match modern borders, and that ancient cultural objects from one Andean country can easily appear to be from another Andean country. Thus to prevent an illicit Bolivian antiquity from being improperly imported into the United States simply by having the possessor declare it to be Chilean, we must restrict the movement of Chilean antiquities as well. By having such restrictions through the whole region we prevent all Andean antiquities from being laundered.

The possibility of restricted Bolivian antiquities being presented as or implied to be Chilean on the American market is something that has come up in my research. During my master’s dissertation completed in 2006 I located a number of antiquities on the market being presented as “coastal Tiwanaku”. Tiwanaku is in Bolivia and Bolivia certainly has no coast; the implication, then, was that these Tiwanaku-style objects were not from Bolivia which had an MOU with the USA, but rather from one of the few Tiwanaku-period sites on the Chilean coast, and thus not subject to import restrictions. It is precisely because we have no way to be sure which country a looted object like that came from that we need import restrictions on ALL such objects.

I would also like to say that I am glad to see that palaeontological material will also be included with the proposed MOU, in line with Chile’s cultural property law. While my research on the topic of fossil trafficking in Latin America is in its early stages (but will be supported by a large European Commission grant starting in January of 2020 and lasting for 5 years), my research team and I have already identified northern Chile as a fieldwork location due to the sensitive nature and marketability of paleontological remains from there. We have also identified the US as the primary market point for said remains after having conducted preliminary work on the topic in US-based fossil and gem shows. While I do not yet have mature results of this research, I can safely assert that the problem exists and that import restrictions would be helpful.

I do warn that if the MOU is signed, the new restrictions will need to be communicated effectively to US-based fossil dealers as they are not used to regularly following the results of cultural property MOUs. Many do not know that classifying fossils as “cultural patrimony” is a particular quirk of some South American legal regimes. I’d recommend promulgating the results to various dealer associations and, perhaps, providing details for the fossil-focused programmes of upcoming fossil and gem shows.