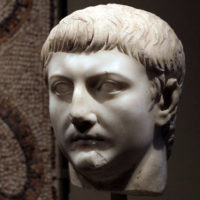 Even when museums appear to embrace ethics, false ideas about the law remain

About a week ago, a headline in the Cleveland Plain Dealer caught my attention: 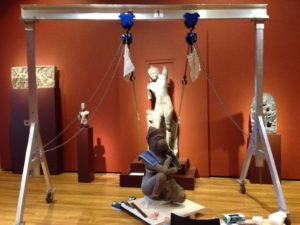 The Cleveland museum taking a mould of the base of a statue of Hanuman which was stolen from Koh Ker, Cambodia either before 1970 or after. Doesn’t matter, still stolen, still had to be returned.

This article discusses how the hiring of this young “rising star from a new generation of curators and scholars” would help rehabilitate the Museum’s image after a series of recent illicit antiquities scandals triggered various high-profile, high-shame returns in recent years. I’m happy to see that the museum has put ethical practice at the centre of its hiring criteria for a new director. I look forward to seeing Pevnick, a Greek and Roman Art Curator snagged from the Tampa Museum of Art, lead in this field.

Yet I am let down to see representatives of the Cleveland Museum putting out such quotes as:

“we will not be acquiring anything that doesn’t have solid provenance back to 1970 and that doesn’t satisfy all of our questions to a degree that offers great certainty regarding where an object has been.”

In other words, the museum is under the impression that 1970, the date of the UNESCO Convention on the Means of Prohibiting and Preventing the Illicit Import, Export and Transport of Ownership of Cultural Property, is a legitimate cut off point for antiquities provenance research. 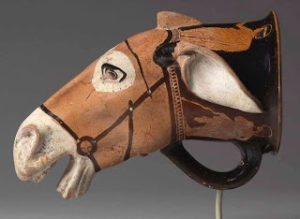 A Greek donkey head rhyton that the Cleveland Museum purchased in 1977, tied to many of your favourite convicted and disgraced dealers. They sent it back to Italy in a group of 14 antiquities in 2008. UNESCO 1970, not a factor.

The fantastic and inspirational students in the master’s-level online PGCert programme in Antiquities Trafficking and Art Crime here at the University of Glasgow have been joking recently that they’re going to make t-shirts or hats (or get forehead tattoos) that say “1970 is not the cut-off”. The myth that 1970 has some basis in either law or provenance research good practice is so pervasive that, well, quotes like this exist in articles about how museums with a past history of poor decisions are trying to become “profoundly ethical”. Yet this idea, that if an antiquity was out of its country of origin before 1970 it is OK to buy, is at best terribly mistaken, at worst profoundly UNethical. It certainly is an idea that was manufactured to support a particular point of view rather than what either the law or best practice actually is.

So to be as quick and clear about it as this non-lawyer here can be, the 1970 UNESCO convention does not establish what is and is not a stolen antiquity: local law does. A swirling mix of the law of the country of origin (usually ownership law) and the law of the country where the antiquity has ended up (ownership law as well as statutes of limitations and evidentiary standards for recovery of stolen property) determines which antiquities are stolen. So if a “source” country claims that an antiquity in a “market end” country is their property, and the market end country agrees based on their own law, it doesn’t matter when the antiquity left the source country. UNESCO and 1970 have nothing to do with it.

Or rather, let’s take a concrete example: in 1936 a relief of a Persian guard was stolen from the famous Iranian site of Persepolis. Nearly 80 years later, the relief was purchased by dealer Rupert Wace after some exciting twists and turns including a 60ish year stint in a public Canadian museum. When Wace imported the piece into the United States for sale it was seized by the authorities and returned to Iran, despite being absolutely, positively out of Iran long before 1970. Why? Because it was stolen. Iranian law that dates to before 1936 made the piece the cultural property of Iran and prohibited its export. The date of that piece of legislation is the cut-off date for antiquities from Iran, and anything on the antiquities market that was exported after that cut off date is at least illicit, possibly illegal (depending on the country it came to rest in), and could be seized at any time; 1970 has nothing, at all, to do with it. 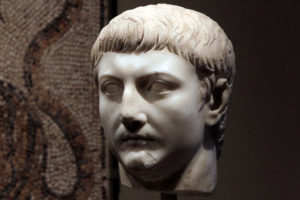 Drusus Minor, here, was certainly stolen and almost certainly illegal, despite being stolen around 30 years before the UNESCO convention. Cleveland gave him back.

Indeed, one of the museum’s recent illicit antiquities scandals, discussed in the article announcing the new director, centred on their 2012 purchase of a Roman portrait head which had most certainly been stolen from Naples in the 1940s. They returned it. So, likely out of Italy long before 1970, but still totally stolen; Italy could have litigated for its return but luckily didn’t have to. The UNESCO date is entirely meaningless.

Every country has their own definitions of ownership and their own cut-off dates. If any of them happen to be 1970, it’s coincidence. Any museum, collector, auction house, or dealer treating 1970 as a legitimate cut off is not acting ethically. They are wilfully ignoring legal reality and are making up rules that don’t exist.

And let me tell you, many, many, many museums, collectors, and dealers [1] appear to firmly believe that the 1970 cut off is a real thing. Why?!

At least in the case of American museums, this false belief that 1970 is a thing seems to stem from the standards of the Association of Art Museum Directors (AAMD) who in 2004 or thereabouts brought 1970 on board as the cut off that “ethical” museums needed to establish an antiquity’s provenance back to. The 2008 version of those standards states:

…which is terrible advice. It has absolutely no basis in the law. 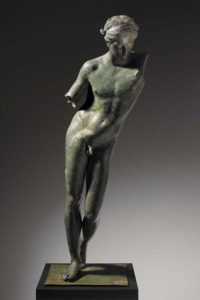 Cleveland hasn’t sent this statue back to anyone (yet), despite a lot of criticism for the 2004 purchase. We’ll see if it stays.

For museums, their employees, and their professional organisations to truly be “profoundly ethical”, they must abandon the various myths that internally legitimise bad practice and illegal behaviour. The 1970 cut off is one of them.

With that, I wish Seth Pevnick the best of luck at the Cleveland Museum of Art, and I sincerely hope that he implements a regime of complete provenance research and staff training towards truly ethical behaviour and what the law actually is rather than what certain people want the law to be.

[1] Word on the street is that some major auction houses are using 2000 as a cut off, or some sort of rolling 20 year thing as a cut off. It makes even less sense, but try to get a straight answer on that one. Good luck.