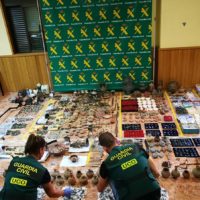 Hot this week: Colonialism and return of cultural objects

What others are saying: Who has the right to Nazi-looted art?
(14 December 2018; Herald & Review)

Police Nab a Suspect in the Brazen Theft of a Renoir From a Vienna Auction House—But Others Remain at Large (Austria)
(13 December 2018; ArtNet News)

Why the U.S. Should Not Assist Italy in Forfeiting a Rare Bronze (Italy, USA)
(10 December 2018; The New York Times)

The arts crimes expert who is making Scotland her home (UK)
(18 December 2018; The National)

US an Oz ignore India’s request for return of stolen idols (India, Australia, USA)
(11 December 2018; The Times of India)