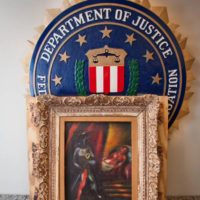 Hot this week: After a Warhol theft in Illinois

Are the principles set out for identifying Nazi-looted art fit for purpose?
(29 October 2018; Apollo)

Rival auction houses to share research as authenticity of painting hangs in the balance (USA)
(3 November 2018; The Telegraph)

Bulger And The Gardner Heist — A Lot Of Speculation, And Very Little Evidence (USA)
(31 October 2018; WBUR)

Springfield Art Museum added 99 works to collection in 2018. It says it can protect them (USA)
(2 November 2018; Springfield News-Leader)

Pierre Bergé’s Foundation Withdraws a Mysterious Painting the Fashion Mogul Once Attributed to Manet From Its Sale at Sotheby’s (France)
(31 October 2018; ArtNet News)

A Family Recovered Most of What the Nazis Stole. But Not This. (Germany)
(31 October 2018; The New York Times)

Ministry of Defence accused of ‘failing to save First World War submarines from looters’ (UK, Netherlands)
(3 November 2018; The Daily Mail)

A group of Chinese villagers traveled to Amsterdam to ask for the return of a mummified monk (China, Netherlands)
(1 November 2018; Quartz)

Thailand hopefully to get back over 60 looted Thai artworks from overseas (Thailand)
(1 November 2018; The Nation)