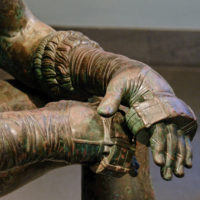 Perhaps a break from the social can revive the thoughtful?

As some of you may know/have noticed, I’m taking a bit of a hiatus from twitter. For years I’ve enjoyed it for scholarly interaction and information sharing, but in the past year or so it’s become a very stressful place; in the past few weeks I just couldn’t take it. I just can’t fight these battles right now. I’m considering some sort of phased or limited return, perhaps solely for information sharing, but for now I’m taking a breath. 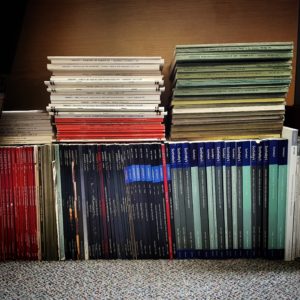 My hope is that I’ll use some of my now-spare internet time to revive this blog a bit. It’s been dormant for a while for some pretty good reasons:

While the last one certainly isn’t cleared up yet (OMG MORTGAGES!) I think it’s time to revisit this format for info sharing. Don’t hold me to it, but I’m going to try. Thus you may see some activity on my twitter account, but probably just to post links to this blog, announcements of papers and events, and the likes.

Meanwhile, this Anonymous Swiss Collector is getting her house in order. I’m organising my auction catalogues. Yesterday was “Tribal”, “Primitive”, and “other painfully offensive market monikers for non-Western things”. Here’s about 1/4 of them. “Antiquities” (read: stuff made by ancient peoples that Europeans feel is more “us” than “them”) are next, but I have a student who needs to pour though them first.