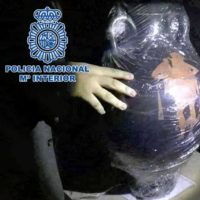 In the Thorny Questions of Authenticity, Who Decides?
(27 March 2018; Blouin Artinfo)

Looted Ethiopian treasures in UK could be returned on loan (Ethiopia, UK)
(3 April 2018; The Guardian)

Looted is a loaded word — but shouldn’t the cultural wonders of the ancient world be admired in their country of origin? (Ethiopia, UK)
(5 April 2018; The National)

‘There Are Black People in the Future’ – tale of a billboard (USA)
(6 April 2018; Pittsburgh Post-Gazette)

In Utah canyons where an ancient civilization once flourished, the feds are now inviting oil and gas drilling (USA)
(7 April 2018; The Salt Lake Tribune)

A man accused of stealing a gold bar from Keys museum has a dark past, feds say (USA)
(2 April 2018; Miami Herald)

Re-united with the bones of their ancestors (New Zealand)
(8 April 2018; Maori Television)

The Met Will Return Looted Statues of Sages and Goddesses to Both India and Nepal (Nepal, India, USA)
(5 April 2018; ArtNet News)

Missing artefacts back on display in Beirut after decades (Lebanon)
(4 April 2018; TRT World)

Syria: `We received money for documentation but not restoration’ (Syria)
(5 April 2018; The Irish Times)

The world’s most expensive painting cost $450 MILLION because two Arab princes bid against each other by mistake and wouldn’t back down (but settled by swapping it for a yacht) (UAE)
(29 March 2018; The Daily Mail)

A Lost Painting Is Rediscovered. Have You Checked Your Closets Lately? (USA)
(5 April 2018; The New York Times)