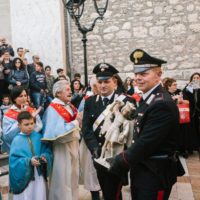 France to return 8 stolen ancient Egyptian artefacts on Thursday (Egypt, France)
(25 October 2017; Ahram Online)
“The artefacts were seized in 2010 after they were found in the possession of a French citizen at a train station”

Libyan antiquities are subject to an awareness campaign (Libya)
(25 October 2017; The Libya Observer)
“To document and protect archaeological sites in the remote desert village of Jaghbub”

Artifact for sale on eBay questioned by Saskatchewan Metis community (Canada)
(27 October 2017; CTV)
Actually being sold as taken from a Metis grave

A masterpiece of Baroque painting, missing for more than a century, is hiding somewhere in L.A. (USA)
(22 October 2017; Los Angeles Times)
So says a note from the painting: “I have been in the same family for I believe 60 years, although I do not know how I was acquired.”

Is An Ancient Text In The Museum of the Bible Real Or Fake? (USA, Turkey, Egypt)
(22 October 2017; Daily Beast)
When you buy unprovenanced antiquities, you get fakes and loot, as Hobby Lobby and the MoB are finding out.

The Saga of a Long-Lost 15th-Century Illuminated Prayer Book (USA)
(25 October 2017; Atlas Obscura)
“The Luneborch manuscript vanished, and was lost for decades only to reappear again in a mysterious package.”

Statues taken from SF Children’s Museum found buried in back yard (USA)
(25 October 2017; Albuquerque Journal)
It is not known why the man stole the statues from the Santa Fe museum, though he claims that a museum employe gave them to him.

Opponents of the Berkshire Museum Sale May Have Just Found an Ingenious Legal Loophole (USA)
(26 October 2017; ArtNet News)
Museum members are claiming that the controversial sale of Rockwell paintings is a breech of contract with museum supporters.

Remains stolen from burial caves return to Hawaii after more than a century (USA, Germany)
(26 October 2017; KHON)
“The remains were stolen between 1896 and 1902 and sold directly to the Museum of Ethnology in Dresden.”

Painting in Gurlitt hoard identified as Nazi loot—thanks to a tiny repair hole (Germany)
(26 October 2017; The Art Newspaper)
Thanks to documentation from Monuments *WOMAN* Rose Valland.

Looted Greek Antiquities Allegedly on Sale at London Art Fair (Greece, UK)
(23 October 2017; Greek Reporter)
Complexities in this case. Permission was gained to sell it, seemingly given to Switzerland from Italy, but the pieces are Greek.

Greek Culture Ministry to Claim Two Stolen Antiquities up for Sale in London (Greece, UK)
(26 October 2017; Greek Reporter)
Once in the possession of Becchina and were being sold by Jean-David Cahn.

Hundreds of Italy’s Churches Were Robbed of Artworks. This One Was Recovered. (Italy)
(22 October 2017; The New York Times)
“The isolation of many Italian churches makes them hard to protect from thefts.”

Works hoarded by son of Nazi art dealer to go on public display (Switzerland, Germany)
(27 October 2017; The Guardian)
Kunstmuseum Bern and the Bundeskunsthalle in Bonn are simultaneously showing the Gurlitt pieces.

Four wrecks off south east England at risk (UK)
(27 October 2017; Yachting & Boating World)
The 4 were entered into the Heritage at Risk register related to illegal diving.

The murky trail of stolen antiquities (India)
(21 October 2017; The Hindu)
Before there was Subhash Kapoor, there was Vaman Ghiya

HC seeks report on steps taken for digitisation of art objects (India)
(22 October 2017; Millennium Post)
In response to reports that though steps were meant to have been taken to digitise the collection since 2005, it hasn’t been done.

CISF teams to guard Allahabad Museum (India)
(26 October 2017; The Times of India)
So teams of Central Industrial Security Forces to guard against theft and vandalism

Ancient Ganesh idol stolen (India)
(26 October 2017; The New Indian Express)
This is not the first time an idol was stolen from Chandragiri village in Chittoor district

An Insufficient Antiquities Bill (India)
(27 October 2017; The Pioneer)
“The Bill reflects misplaced priorities and reinforces negative stereotypes of Indian mercantilism even with respect to issues that have a deep bearing on our heritage”

U.S. court suspends auction of ancient Iranian relief (Iran, Canada, USA)
(28 October 2017; Tehran Times)
The piece was stolen from Persepolis prior to the 1979 revolution and was being sold by Rupert Wace Ancient Art. Much more to this story.

Saudi Arabia retrieves 52,000 historical artefacts since 2011 (Saudi Arabia)
(22 October 2017; Arab News)
From inside and outside the country as part of the National Project for Digital Recording of Antiquities