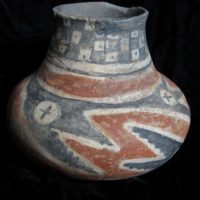 Hot this week: A draft antiquities law for India that’s no steps forward and ten steps back

Why Art Basel’s New Ethics Rules Are Good News for the Market (and Other Insights)
(2 October 2017; ArtNet News)
The rules include a set of guidelines for exhibitors to ensure transparency and legal compliance. This does not mean the whole art market will “go legit” but it’s a step in the rigt direction.

Why ‘stolen’ artifacts cannot be returned now, by U.S. representatives (Nigeria, USA)
(30 September 2017; The Guardian)
The director of the Smithsonian’s National Museum of African Arts insists it’s better to keep artefacts in the US and promote African culture there.

Why we can’t return African artworks –Smithsonian museum (Nigeria, USA)
(30 September 2017; Punch)
Dr Johnetta Cole thinks African cultural heritage is better off in the Smithsonian museum, because we do everything in our power […] to tell your stories.”

3 sentenced to prison for looting Mississippi Indian mound (USA)
(30 September 2017; The Republic)
For looting at Doskie Indian Mound in 2014.

The Prison Guards Who Stole a Salvador Dalí Painting (USA)
(1 October 2017; Daily Beast)
Painted for the prisoners of Riker’s Island, stolen by guards

US court to decide on terror victims’ claim on lent artefacts (USA, Iran, Israel)
(2 October 2017; The Art Newspaper)
US citizens, injured in a terror attack in 1997, are suing to seize Iranian antiquities on loan to the Oriental Institute Chicago as recompensation.

Stolen Rockwell painting returned to family after 40 years set for auction (USA)
(5 October 2017; NJ.com)
“The 1919 painting, known as “Taking a Break” and “Lazybones,” was returned to members of the Grant family by FBI art crimes agents”

Handyman wanted in Sparta art theft (USA)
(8 October 2017; New Jersey Herald)
The missing artwork is valued at about $239,000 but no details about it are offered

Renoir painting stolen before auction near Paris (France)
(30 September 2017; BBC News)
The small piece was on display in Saint-Germain-en-Laye in advance of the sale.

1,000 African Skulls Stolen for Racist Research in Germany Discovered in a Museum Basement (Germany, Rwanda, Tanzania, Burundi)
(6 October 2017; Newsweek)
“It seems like [von Luschan] got them from some burial places”

Thousands of artefacts ‘missing’ from Britain’s top musuems (UK)
(1 October 2017; The Telegraph)
All museums misplace things, this article seems surprised by that.

Fraudster who tried to sell fake Greek bowl foiled by Poundland notebook (UK)
(2 October 2017; The Telegraph)
“Suspicions were raised by the Art Loss Register, which refused to issue a certificate”

Artists using living proof that their work is genuine (UK)
(2 October 2017; The Times)
Artists are turning to vellum to avoid possible forgeries of their works.

Police release images of paintings stolen from art gallery (UK)
(4 October 2017; Nottingham Post)
And the thief set fire to a painting of ODB…

Nighthawks cause damage at scheduled monument (UK)
(6 October 2017; Northumberland Gazette)
Holes 50m to the south of the Corbridge site and stuff has been stolen

The damage being done to our churches (UK)
(6 October 2017; KLFM)
It will cost £100k to repair damage to St Andrew’s in Walpole after roof lead theft

From Rhino horns to Egyptian jewels – these are the items that have been stolen from Leicester’s museums (UK)
(4 October 2017; Leicester Mercury)
Grab bag of local museum theft

The government must bring the stolen Indigenous dead home (Australia)
(4 October 2017; The Guardian)
When will Australia have a proper keeping place for Indigenous remains?

Theft at puja older than city (India)
(30 September 2017; Telegraph India)
Thieves struck in the night before the Durga Puja festival, taking ancient jewellery and saris from the idol.

4 try to steal idol from temple, land in villagers’ net (India)
(2 October 2017; The Times of India)
Villagers caught the failed idol thieves after being woken up by the break in.

Madhya Pradesh STF arrests 2 men for smuggling antiques (India)
(5 October 2017; The Times of India)
Two idols and a painting dating to 1931 were recovered

Two held with antique idols, painting (India)
(6 October 2017; The Hitavada)
It is assumed the idols and painting were stolen from somewhere, but where?

Now, monumental fines for graffiti (India)
(7 October 2017; DNA India)
Fine of up to 5000 rupees and imprisonment of up to three months

Six panchaloha idols stolen from temple in Chennai (India)
(8 October 2017; The News Minute)
From the Srinivasa Perumal temple in Perungudi

10th-century Shiva idol to be on home ground soon (India)
(8 October 2017; The New Indian Express)
Taken from a Rajasthan temple 10 years ago, located in a London private collection

New draft antiquities bill will facilitate idol theft & smuggling, say activists (India)
(8 October 2017; The Times of India)
What seems to be a spectacularly terrible idea, eliminating licensing for antiquities selling. There is no pro, only con.

Theft at Ekvira Devi Temple (India)
(4 October 2017; The Hindu)
The ornament on the dome was taken from the temple on the Pune-Mumbai highway

Temple’s Stolen Dome Sparks Quarrel Over its Fabrication (India)
(5 October 2017; Pune Mirror)
Villagers donated gold, but somehow that isn’t what the stolen dome was made of…

CBI faces flak from court as case of idol theft in Allahabad drags on for 37 years (India)
(1 October 2017; First Post)
The 37-year-old idol theft case is probably the oldest pending matter in the country of India.

CBI faces flak for delaying 37-year-old case (India)
(2 October 2017; The Asian Age)
A case of idol an theft that happened in 1981 is halted in its last stages because the prosecutor was transferred without a successor.

Senate Minority Leader: Don’t Return Trove of Jewish Artifacts to Iraq (Iraq, USA)
(4 October 2017; The Jerusalem Post)
Charles Schumer is asking the State Department not to return antiquities that are legally the property of Iraq

An Ancient Canaanite Treasure in Gaza Was Leveled to the Ground by Hamas (Palestine)
(6 October 2017; Haaretz)
“Tel Es-Sakan (hill of ash) was the largest Canaanite city between Palestine and Egypt”

In Gaza, Hamas levels an ancient treasure (Palestine)
(6 October 2017; Phys.org)
Development, not ideology, caused this destruction. It appears to have been a major site.

Swastikas found spray-painted outside settlement archaeology site (Palestine)
(3 October 2017; The Times of Israel)
“Incident is the third such defacement in the past four years” at the site

Ancient Statue Damaged by ISIS Resurrected in Damascus (Syria)
(3 October 2007; Smithsonian.com)
Palmyra’s Lion of Al-lāt is on display at the National Museum of Damascus.

Palmyra statue damaged by militants goes on display in Damascus (Syria)
(1 October 2017; Gulf Times)
The Lion of Al-Lat was moved to Damascus for restoration and is now on display in the National Museum

He smuggled a rhino horn artifact out of Miami, but the feds were watching (USA)
(2 October 2017; The Washington Post)
Member os the so-called Rathkeale Rovers successfully bid on an illegal Chinese libation cup made from rhino horn at an auction.