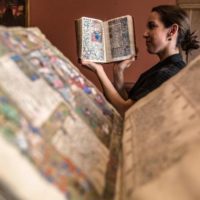 World Monuments Fund recognises sites threatened by conflict, climate change and natural disasters
(17 October 2017; The Art Newspaper)
“Cultural locations in the Caribbean, the US Gulf coast and Mexico hit by recent hurricanes and earthquakes were a last minute addition to the list”

Philaeni statues’ disappearance refuted by antiquities authorities (Libya)
(16 October 2017; Libya Herald)
The Italian era pieces were said to be stolen about 2 years ago, authorities said they were removed for safekeeping

Benghazi palace may become archaeological museum (Libya)
(18 October 2017; Libya Herald)
One of the city’s oldest colonial buildings was heavily damaged in conflict but could be used to house antiquities.

Legendary Kumalo photos abandoned in museum (South Africa)
(16 October 2017; IOL)
Alf Kumalo Museum in Diepkloof is said to be in a bad state with some of the photos stolen.

The U.S. Is Withdrawing from UNESCO—What Happens Now? (USA)
(13 October 2017; Artsy)
Worries and speculations; whatever it is, it probably isn’t good.

Joe Quesada reveals heartbreaking details of art theft…and how you can help (USA)
(17 October 2017; The Beat)
Handyman who stole the comics art had been working for the Marvel exec for 15 years.

It Turns Out That Oxycontin, the Highly Addictive Painkiller, Has Helped Bankroll More Than a Dozen Museums (USA)
(18 October 2017; ArtNet News)
The Sackler family, who have been implicated in criminal rebranding of opioid pharmaceuticals, have also sponsored museums all over the world, leaving their name everywhere.

The history of Iraqi Jews is in jeopardy (USA, Iraq)
(19 October 2017; The Washington Post)
Who owns Iraqi Jewish artifacts? The state of Iraq or the Jewish community?

After 20 years, has mystery of Oñate’s foot been solved? (USA)
(20 October 2017; Albuquerque Journal)
Theft of the statue’s foot to protest the conquistador’s treatment of the Pueblo.

Norman Rockwell’s Family Meets With Massachusetts AG in Attempt to Halt Sale of Berkshire Museum’s Paintings (USA)
(17 October 2017; ArtNet News)
“Family members brought along a 1958 letter that the Berkshire Museum’s former director wrote to Rockwell, which they believe proves that the artist wanted his works to remain accessible to the public.” The museum previously did not respond to the family.

Can the Museum of the Bible overcome the sins of the past? (USA)
(16 October 2017; Science)
Probably not: the artefacts are looted and they can’t unloot them.

New Bible Museum Previews Exhibits and Ethical Standards (USA)
(18 October 2017; The Christian Perspective)
The director claims that they are not “using anything where it’s not clear where it’s coming from”; an unbelieveable claim that even the top museums of the world can’t make. *Eyebrow Raise*

A Remnant from Caligula’s Ship, Once a Coffee Table, Heads Home (Unites States of America, Italy)
(19 October 2017; The New York Times)
Sitting in the Park Avenue apartment of an antiques dealer for decades

Donald Trump’s ‘Renoir’ raises questions (USA)
(16 October 2017; The Art Newspaper)
It’s very much in the Art Institute of Chicago. Does Trump think his isn’t a fake?

Trump Continues to Lie About His Fake Renoir (USA)
(19 October 2017; Hyperallergic)
Apparently the President of the United States owns a copy of a Renoir painting he insists is an original. Go figure.

Who Owns Graffiti, the Artists or the Developers? A Landmark Trial Over 5Pointz Considers This With Fresh Eyes (Unites States of America)
(20 October 2017; ArtNet News)
Twenty artists have filed a lawsuit saying that the removal of their murals is a violation of their rights.

Accused of Defrauding Clients of Millions of Dollars, Art Dealer Timothy Sammons Goes to Jail in New York (Unites States of America)
(20 October 2017; ArtNet News)
“Prosecutors are calling for the former Sotheby’s specialist to serve five to 15 years in prison for allegedly stealing millions of dollars from clients”

Norman Rockwell’s Sons Sue Berkshire Museum, Seeking Halt to Sotheby’s Sale (Unites States of America)
(20 October 2017; Art News)
They argue that the museum does not have the authority to deaccession the works.

Larnaca CID seize stolen ancient Egyptian pot (Cyprus, Egypt)
(17 October 2017; Cyprus Mail)
The piece had been smuggled out of Egypt and was in the possession of a Cypriot.

Looted Benin bronzes to be lent back to Nigeria (UK, Germany, Nigeria, France)
(16 October 2017; The Art Newspaper)
A permanent rotating display is not nothing but not a repatriation.

EU admits the Elgin Marbles will REMAIN in Britain after Brexit (UK, Greece)
(18 October 2017; Express)
As the Parthenon Sculptures were brought to Britain long before the EU even existed, the connection between Brexit and returning them to Greece was nonsensical in the first place.

Replica of Nelson’s stolen jewel on display (UK)
(20 October 2017; The News)
“Chelengk, a military decoration containing more than 300 diamonds,” was stolen in 1951.

Infamous art forger John Myatt reveals his secret: you have to love the artist (UK)
(20 October 2017; The Sydney Morning Herald)
Not quite a “how to” from Myatt

File Status Report On Preservation Of Artifacts And Manuscripts In National Museum: Delhi HC (India)
(21 October 2017; Live Law)
Questions as to if the manuscripts are being properly cared for.

The man who stole gods (India)
(21 October 2017; The Hindu)
A long read on the Subhash Kapoor case

Islamic State’s looting of antiquities is rising but hard facts remain scarce (Iraq, Syria)
(19 October 2017; The Art Newspaper)
Nothing we haven’t heard before. Yes, IS is on the retreat, but yes, they still loot and destroy antiquities. And no, the fabulous sums they’re allegedly making from it are still not verifiable by any stretch. Also, the number of fakes on the market increases.

Tourism Ministry to lay more emphasis on saving, protecting shipwrecks, artefacts (Malaysia)
(17 October 2017; New Straits Times)
Out of fear that the shipwrecks will be looted

How Qatar sidestepped the UK export system again (UAE, UK)
(17 October 2017; The Art Newspaper)
The legal intricacies around a jade wine flask, currently in the Victoria and Albert Museum, but legally owned by Qatar Museums.

‘Stolen Salvador Dali’ painting recovered in Lebanon (Lebanon)
(19 October 2017; BBC News)
…but is, according to the quoted expert, “not considered a serious painting”. Some asking if it is real.

Performance Artist Who Exposed Herself In Front of the “Mona Lisa” Is Acquitted (France)
(20 October 2017; Hyperallergic)
Deborah De Robertis was acquitted of the charge of sexual exhibitionism because her performance was ruled non-sexual.