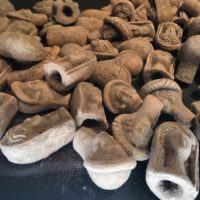 Hot this week: Nothing will stop the sale of a museum collection…

Looters of Egyptian Artifacts Try to Recruit Egyptologists for Help (Egypt)
(28 August 2017; Live Science)
Unsolicited contact with reporters and other via Facebook. I think most of us working in this field get these.

Egypt returns stolen currency artefacts to Iraq, China (Egypt, China, Iraq)
(28 August 2017; Ahram Online)
Seized before they could be smuggled out of Egypt

Skeleton plundered from Mexican cave was one of the Americas’ oldest (Mexico)
(30 August 2017; Nature)
A truly painful looting story. Skeleton stolen and what little was left was 13,000 years old.

Waterlogged Texas Museums Assess the Damage Caused by Hurricane Harvey (USA)
(28 August 2017; ArtNet News)
Unclear if the sculptures at Rockport Center for the Arts have survived the storm

Berkshire Museum board turns down $1m to pause art sale (USA)
(29 August 2017; The Art Newspaper)
Turned down $1m in hopes of selling Rockwells for much more.

The Berkshire Museum Is ‘Under Review’ For Planned Sale, Massachusetts Attorney General Confirms (USA)
(30 August 2017; ArtNet News)
On the deaccessioning: the AG is “reviewing the transaction for how it comports with applicable charities law”

Catacomb thieves drill into Paris cellar to swipe €250,000 of top wine (France)
(30 August 2017; The Telegraph)
Broke into the catacombs then drilled into the wine cellar. Interesting!

Italy relaxes stringent export laws for post-war art (Italy)
(30 August 2017; The Art Newspaper)
“Extends the window during which private owners of works by deceased artists may self-certify them for export from Italy without a licence, from 50 to 70 years after they were made”

The Mystery Behind The Lost Books Of A Cherished Lublin Yeshiva (Poland, Germany)
(31 August 2017; Forward)
Did the Nazis burn the 30k-volume library

Briton arrested in Spanish hotel on suspicion of stealing ancient artifacts from Italy (Spain, UK, Italy)
(29 August 2017; The Telegraph)
Name came up as having a warrant out for his arrest in Italy for antiquities theft.

A Green Light for Art Criminals? (UK)
(1 September 2017; The New York Times)
What will happen if the Met’s Art and Antiques Squad is shuttered?

Popular Victoria Park sculpture stolen from Duncan Street Reserve (Australia)
(28 August 2017; Southern Gazette)
Hyatti’ (You are my all, my everything) by Ayad Alqaragholli

Subash Kapoor, 10 others produced before court (India)
(30 August 2017; The Times of India)
The case seems to be slowly moving forward after all these years.

Iraq establishes new security force to protect its archaeological wealth (Iraq)
(1 September 2017; Al Monitor)
Dhi Qar province created the force but there are questions as to if it is properly provisioned for the task.

Christie’s and Hedge-Fund Titan Move to Quash Turkey’s Lawsuit Over `Stargazer’ Idol (Turkey, USA)
(30 August 2017; ArtNet News)
Claiming that the claim is outside any applicable statute of limitations.