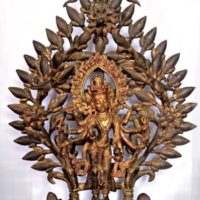 Hot this week: UK opens door for return of Nazi looted art, but not Greta Moll

Metro station police foil security guard’s attempt to steal artefact from Coptic Museum (Egypt)
(14 September 2017; Ahram Online)
The arrested is a security guard in the museum and hid the piece under his clothes.

Two suspects arrested over illegal excavation in Cairo and Sharqia (Egypt)
(18 September 2017; Egypt Independent)
One arrest for a tunnel towards the Ibn Tulun mosque, another for antiquities digging under their home. Dangerous stuff.

No Egyptian antiquities were smuggled to Louvre Abu Dhabi Museum: Official (Egypt, UAE)
(19 September 2017; Egypt Independent)
“Egypt is only sending antiquities for temporary shows at museums around the world but not permanently”

Ottoman-era artefacts seized at Cairo airport to go to Museum of Islamic Art (Egypt, Turkey)
(20 September 2017; Ahram Online)
Heading to Istanbul. Among the items were Coptic textiles in a poor state of conservation.

Head of Libya’s archeology authority urges neighboring countries to help end smuggling of antiquities (Libya)
(16 September 2017; The Libya Observer)
Ahmed Hussein said that both countries are responsible for securing borders, not just the one that is losing its antiquities.

Saxonwold man offers R50k reward for stolen artworks worth millions (South Africa)
(14 September 2017; The Citizen)
Among them is an Irma Stern portrait called “Nude” from 1949

Two Stolen Chapel Paintings To Be Repatriated To Peru After Collector Voluntarily Returns The Works (Peru, USA)
(18 September 2017; JDSupra)
The collector and Christies voluntarily returned the works when it became obvious to everyone involved that the art was from a chapel in Hualahoyo, Junín.

Berkshire Museum’s Smithsonian ties severed over art sale plan (USA)
(5 September 2017; The Berkshire Eagle)
Because pretty much everyone thinks deaccessioning and selling museum pieces is unethical, yet the Berkshire Museum soldiers on through it.

A Magazine Publisher Is Suing Virginia’s Prisons for Censoring a Rubens Painting of Adam and Eve (USA)
(8 September 2017; ArtNet News)
And notes that the seal of the state of Virginia depicts a woman with exposed breast.

Ann Freedman The End Or The Beginning For Knoedler’s Disgraced Director (USA)
(13 September 2017; Artlyst)
Sued for personally advising them to buy fake Pollocks.

Despite Leading Signs, Perpetrators of 1985 de Kooning Heist May Remain a Mystery (USA)
(18 September 2017; Observer)
“The statute of limitations has expired, and there’s no one alive left to charge with possession of stolen property.”

Monument to myth or history? Museum of the Bible to open in Washington, D.C. (USA)
(18 September 2017; Chicago Tribune)
The museum is to be filled with unprovenanced and suspect antiquities.

Getty Villa To Reopen Thursday After LAPD Bomb Squad Comes Up Empty (USA)
(20 September 2017; Deadline)
Police searched the museum after a threat: nothing there.

Navajo Nation vows to sue Trump if he shrinks Bears Ears national monument (USA)
(21 September 2017; Washington Examiner)
And many of us applaud them for taking a stand to protect their (and our) heritage from small minded, corrupt people.

Peabody Essex Museum Gets Set of Native American Artifacts (USA)
(21 September 2017; The New York Times)
The Andover Newton Theological School, which owned the pieces for 70 years, has been cited for failing to follow NAGPRA. The Museum plans return.

Accused mobster tied to Boston art heist to undergo psychiatric test (USA)
(22 September 2017; Reuters)
Robert Gentile, 81, claims to have no memory of his previous pleas and, of course, no knowledge of the Gardner Museum heist.

Who Stole ‘The Big Maple Leaf,’ the Biggest Coin in the World? (Germany)
(16 September 2017; The Daily Beast)
Well, these four guys did.

Berlin police laugh off theft of their own Nazi artefacts (Germany)
(22 September 2017; The Sunday Times)
Pretty embarrassing to have a heritage theft from police head quarters.

Man charged with antiquities theft over fossils (Greece)
(15 September 2017; eKathimerini)
Few details about the man who was arrested for the ancient human footprint theft

Police in Italy fight back against theft of art from churches (Italy)
(13 September 2017; The Local)
More info on the Italian sacred art recovery: many of the 100 works recovered were Italian

Italy police recover $8.4m worth of stolen church art (Italy, Belgium)
(13 September 2017; The News)
Pieces were stolen in 1990 from Mons, Belgium and were picked up in Naples along with a 16th century Madonna from a Naples church. 20 people reported for prosecution.

How can museums speed up the return of art looted during the Nazi era? (UK)
(11 September 2017; The Art Newspaper)
“UK government has announced it will strengthen its commitment to the restitution of Nazi-looted art by indefinitely extending the Holocaust (Return of Cultural Objects) Act of 2009”

Imitation Banksy artist’s work dubbed ‘vandalism’ by the Creative Foundation in Folkestone (UK)
(14 September 2017; Kent Live)
This fella used street art to critique the removal of a Banksy due to ownership dispute.

Bring back the Met’s art and antiquities squad (UK)
(19 September 2017; Apollo)
Small in numbers as they are, they are a vital unit in the UK. Losing them will be terrible.

Car booter unwittingly buys stolen £30,000 painting for £40 before handing it to police (UK)
(17 September 2017; The London Economic)
“It was reported stolen when the acclaimed artist shipped it from his New York apartment to the Sussex home of multimillionaire buyer Ivan Massow last year. “

A £30k painting created by Joan Collins’ son turned up at an Isle of Sheppey bootfair (UK)
(20 September 2017; Kent Live)
As a thank you the painter has offered to give a master class to the finder’s pupils.

National Gallery wins legal battle over Henri Matisse’s Portrait of Greta Moll (UK)
(21 September 2017; The Telegraph)
“The museum and Britain were shielded by sovereign immunity and that the grandchildren had waited too long to bring the case.”

National Gallery can keep ‘stolen’ Henri Matisse painting, judge rules (UK)
(21 September 2017; iNews)
It was the grandchildren of Greta Moll, the subject of the painting, who brought the suit.

Two men jailed over Dumfries gold medal theft (UK)
(19 September 2017; ITV)
One pleaded guilty, the other denied stealing the Olympic medal from the museum but was convicted anyway.

Time of the essence in race to restore art looted by the Nazis (UK)
(12 September 2017; The Jewish Chronicle)
UK-based conference “70 Years and Counting: The Final Opportunity?”

UK’s restitution powers to be extended indefinitely for Nazi-era loot (UK)
(13 September 2017; The Art Newspaper)
National museums who were forbidden from deaccessioning artworks to restitute them will not have that restriction, but clock runs out in 2019.

Global market for forged and stolen artworks is thriving and underpoliced (Australia, UK)
(21 September 2017; The Sydney Morning Herald)
The author attended a conference that featured forger John Myatt and applies those thoughts back on Australia.

Stolen Aboriginal relics seized in NSW (Australia)
(13 September 2017; News.com.au)
From a number of locations around Tasmania and due to be auctioned online in Sydney

Police seize stolen Aboriginal artefacts in raid (Australia)
(14 September 2017; NITV)
Raid conducted due to a tip off that the objects were about to be sold.

A film on idol robberies (India)
(18 September 2017; Deccan Chronicle)
“Kalavu Thozhirchalai is also the last film to be shot inside temples in Tamil Nadu since the government doesn’t allow filming inside temples anymore.”

Theft At Temple In Siliguri’s Champasari (India)
(20 September 2017; Siliguri Times)
Jewellery was taken from the idols

Stolen cultural asset returned to South Korea from Japan after 20 years (South Korea, Japan)
(13 September 2017; The Japan Times)
“Epitaph on porcelain of a high-ranking official of the dynasty who lived in the 14th and 15th centuries”

Despite protests, US returning artifacts to Iraq (Iraq, USA)
(13 September 2017; The Jewish Star)
Keeping the stuff in the US legally would require Iraqi’s agreement, and why would Iraq agree to that?

The Salvation of Mosul (Iraq)
(1 October 2017; Smithsonian)
Layla Salih, “an Iraqi archaeologist braved ISIS snipers and booby-trapped ruins to rescue cultural treasures in the city and nearby legendary Nineveh and Nimrud”

Syrians Launch Campaign to Return Antiquities Stolen in Ongoing War (Syria)
(13 September 2017; Albawaba)
“We are now in the process of drawing up lists of pilfered antiquities before filing cases demanding their restoration with the relevant legal institutions”

New pictures show the destruction of Palmyra (Syria)
(18 September 2017; The Sunday Times)
“Mr Abdulkarim said that at least three lorry-loads of artefacts were removed from the city hours before it first fell to Isis in 2015, protecting much of the heritage.”

Sarcophagus of Hercules set in place (Turkey, Switzerland)
(20 September 2017; Daily Sabah)
Back from Switzerland where it was smuggled and now going on public display.

As Mexico Searches for Survivors After Massive Quake, Museums Scramble to Locate Staff and Assess the Damage (Mexico)
(20 September 2017; ArtNet News)
Most museums seem to be mostly okay after the 7.1 magnitude quake

Taiwan and Vietnamese men arrested for illegal logging (Taiwan, Vietnam)
(22 September 2017; Asia Times)
Sad: the “Vietnamese suspects were initially runaway workers controlled by the Taiwanese, who drove and dropped them to the forest to fell rare trees”

Photographer and PETA reach settlement over rights to monkey’s selfie (USA)
(11 September 2017; Los Angeles Times)
No one has decided if a monkey can be a rights holder, but the photographer will donate 25% of future revenue from the images to animal charities.

Ivory Dealer Goes Undercover to Help Bust Wildlife Smuggler (USA)
(19 September 2017; US News and World Report)
“Among the most prolific wildlife criminals ever prosecuted in this country”