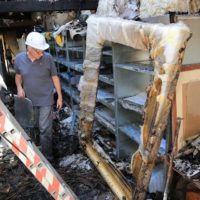 The hunt for Indian yellow
(10 August 2017; Chemistry World)
“A mysterious pigment has often been used to spot fake art – but what if the reference standard is wrong?”

Ministry of Antiquities denies alleged risk of collapse of Qaitbay Citadel (Egypt)
(9 August 2017; Egypt Independent)
Abbas Mohamed, a professor of applied geophysics and environment, said that the last inspection of the castle wasn’t finished and that there’s a risk of loss.

Attempt to smuggle 18th century artefacts foiled at Egypt’s Hurghada port (Egypt)
(17 August 2017; Ahram Online)
The pieces all have a Jewish theme, at a time when Egypt is trying to work to preserve its Jewish heritage.

Antiquities Ministry official denies robbery of 32,000 archaeological pieces from museum (Egypt)
(16 August 2017; Egypt Independent)
“These pieces were owned by an antiquities vendor from Luxor city back when the trade of antiquities was legal.”

Rada seize smuggler with ancient coins at Mitiga (Libya)
(7 August 2017; Libya Herald)
Told the police that this wasn’t the first time he moved coins out of Libya to sell abroad.

ICC to award damages for jihadist Timbuktu destruction (Mali)
(14 August 2017; The New Arab)
There are “serious challenges” to the implementation of the award

Western museums try to forge deal with west Africa to return the Benin bronzes (Nigeria, UK)
(12 August 2017; The Guardian)
Discussing and not true return, but a rotating display in Nigeria without ownership transferred it seems. Better than nothing?

Finding Somaliland’s ancient cave art is hard. Protecting it could be harder. (Somaliland)
(17 August 2017; Somaliland Press)
Tourists are touching the rock art, scratching it with knives, rubbing it away

Calgary’s mayor says Blackfoot knowledge keeper was consulted about Bowfort Towers art (Canada)
(11 August 2017; APTN News)
“Nenshi said he can’t share who the city consulted with because he doesn’t have permission from the elder to release the information.”

Gang Stealing Artwork in Costa Rica Luxury Neighborhoods (Costa Rica)
(10 August 2017; The Costa Rican Times)
They were arrested; apparently they stole the paintings AND the certificates of authenticity in some cases.

Family Gives “One-of-a-Kind” Chilkat Robe to Sealaska Heritage Institute (USA)
(7 August 2017; SIT News)
The anonymous family repatriated the work voluntarily “an effort to return it to its ancestral home and repatriate it to tribal people.”

A major museum has to return another looted artifact. Welcome to the dark side of the art world. (USA)
(7 August 2017; The Wall Street Journal)
“Such laundering is possible, since most antiquities surface on the market and are sold without provenance”

Sycuan Band of the Kumeyaay Nation holds first Cultural Heritage Symposium (USA)
(9 August 2017; The Californian)
“What about trafficking these looted items across the borders of tribal lands here within the U.S.?” Good question!

Additional Security Mulled After Another Shark In The Park Stolen (USA)
(9 August 2017; The Cape Cod Chronicle)
It’s the fourth art shark that has beed stolen.

Wearable art pieces vanish from CSU gallery (USA)
(10 August 2017; Coloradoan)
Kristin Stransky’s “Body Language” was hit and all but two of her works were taken.

How Jeff Koons, 8 Puppies, and a Lawsuit Changed Artists’ Right to Copy (USA)
(14 August 2017; Artsy)
Five lawsuits from one show, with one pending now 30 years later.

Man ‘devastated’ after Civil War artifacts stolen (USA)
(15 August 2017; WSBT)
In Atlanta for a convention, suitcases of memorabilia taken from his car while he was at a film.

Mural or Billboard? The Dispute Over a Shepard Fairey in Brooklyn Heads Back to Court (USA)
(17 August 2017; Hyperallergic)
Mural or billboard for the band Interpol? If ad, permit needed, apparently.

The Statue at the Center of Charlottesville’s Storm (USA)
(13 August 2017; The New York Times)
Erected long after the war in 1924 as racist posturing.

Where Do Confederate Monuments Go after They’re Removed? (USA)
(17 August 2017; Artsy)
Most are relocated to museums or historic sites.

Priceless de Kooning painting is recovered 31 years after being ripped from University of Arizona gallery (USA)
(11 August 2017; AZ Central)
Suspicious, the man who bought it googled it and found old news stories about the theft 31 years ago.

Painting stolen from UA in 1985 recovered; worth up to $160 million (USA)
(11 August 2017; Tucson.com)
Woman-Ochre by de Kooning, stolen from University of Arizona Museum of Art in 1985, located at a New Mexico state sale.

Germany Returns Books Stolen by Nazis to Holocaust Survivors, Heirs (Germany)
(7 August 2017; The Jerusalem Post)
The “Initial Check” project which is focused on finding the rightful heirs of stolen books.

Items Recovered from Wreck of Elgin’s Ship off Kythira (Greece)
(15 August 2017; Greek Reporter)
“Mentor” sank off Kythira in 1802 and was carrying antiquities

Why Is Modigliani Catnip for Forgers? The Fakes (and Feuds) Behind One of the Art Market’s Most Dangerous Artists (Italy)
(7 August 2017; ArtNet News)
His paintings sell for a lot, they have an impression of being easy to make, and the artist kept poor records.

Their fathers saved a priceless Dutch art collection from the Nazis (Netherlands, Canada)
(12 August 2017; The Province)
Hidden in “a man-made cave on the museum grounds, in the De Hoge Veluwe National Park”

High-value objects stolen from Norway museum (Norway)
(14 August 2017; The Local)
Taken from the history of culture section of the University Museum of Bergen

Preocupación en Cantabria Ante el Robo de Campanas en Las Iglesias Rurales del Norte de España (Concern in Cantabria about the Theft of Bells from Churches in Northern Spain; Spain)
(16 August 2017; Mituin)
Fears that this rash of thefts will spread to other regions of the country

Making old bones: Joint Mitnor cave reopens with replica fossils (UK)
(7 August 2017; The Guardian)
3D printed; they note that the fossils are not actually worth much, though people seem to think otherwise.

‘Not one picture should leave this island’ Churchill’s cry as he hid treasured art in a Welsh quarry out of Hitler’s clutches (UK)
(9 August 2017; Mirror)
On hiding the national collection during WWII

The Strange, Sad Story of Joe Orton, His Lover, and 72 Stolen Library Books (UK)
(9 August 2017; Atlas Obscura)
They would take the books from the library, redo the covers, then slip them back on the shelf of the Islington Central Library.

Thieves steal ‘potentially deadly weapon’ from Heage Windmill in Derbyshire (UK)
(10 August 2017; Derby Telegraph)
Well, it’s an old mill bill, but someone could clobber someone else with it.

Met Police unit tasked with targeting art thieves faces closure after detectives moved to cover Grenfell tragedy (UK)
(16 August 2017; The Telegraph)
“Losing it now, when cultural heritage is under threat in so much of the world, would represent a very serious loss.”

$400,000 painting stolen in Melbourne (Australia)
(17 August 2017; The West Australian)
Colonial era painting of an Aboriginal gathering stolen from a home.

Corporate ‘Fake Art’ Profits off Australia’s Indigenous Culture (Australia)
(9 August 2017; Telesur)
“Taking something they have no connection to, they have no idea what it means.”

Australia’s fake art and tourist tack: Indigenous artists fight back (Australia)
(9 August 2017; The Guardian)
The Fake Art Harms Culture campaign against the theft of Indigenous design for the making of cheap tourist goods.

Idol smuggler produced in court (India)
(8 August 2017; The Hindu)
The Kapoor case will have further hearing on 18 August.

Insurers paint on Rs 6,000-cr art insurance canvass (India)
(9 August 2017; DNA)
Art is an asset in India, and where there are assets there is insurance.

Idol Wing-CID opposes anticipatory bail to DSP (India)
(11 August 2017; The Hindu)
“As a high-ranking officer, he can tamper with witnesses”

Statues of martyrs defaced by miscreants (India)
(17 August 2017; The Times of India)
“The statues were kept in the ‘Inquilab Mandir’ at Gumthala village”

Lost and found: Jatin Das has a lot to say on the artful disappearance of masterpieces (India)
(18 August 2017; The Economic Times)
The artist comments on how he feels about Air India’s loss of his artwork

Religious order seeks to recover stolen parts of Marian statue (Malaysia)
(17 August 2017; Herald Malaysia)
An “unnamed antique collector” is believed to be holding the head and hands of the satue.

Iraq steps up efforts to restore lost heritage at ancient Nimrud (Iraq)
(7 August 2017; Al Monitor)
UNESCO has started the first stage of the restoration of Nimrud.

After the Hobby Lobby scandal, a spotlight on antiquities sales in Israel (Israel, USA)
(16 August 2017; USA Today)
“Israel is the only country in the Middle East that permits state-licensed antiquities dealers to sell ancient artifacts”

Stolen Gandharan artefacts (Pakistan)
(12 August 2017; The Express Tribune)
“It is appalling that officials … had the gall to profiteer from the precious artefacts that do not belong to them”

Antiquities experts call for war on Isis looting in Syria and Iraq (Syria, Iraq)
(2 August 2017; The Sunday Times)
“War” in the headline is misleading. Dial it back.

Stolen Diablo Art Turns Up In The Weirdest Places (General)
(16 August 2017; Kotaku)
Such as on a war memorial in Kiev.

FSB opens probe into theft of Chelyabinsk meteorite’s fragment (Russia)
(11 August 2017; RAPSI)
Found in the private collection of a geologist hired by the museum

Road.cc reader donates rare plastic bike to replace stolen museum piece (UK)
(9 August 2017; Road.cc)
After the plastic bike was stolen from the Bakelite Museum, a person who read about the story donated another bike of the same kind.