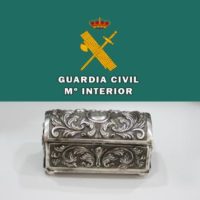 Hot this week: Multiple antiquities seized from the Met.

Five killed while illegally digging for antiquities in Egypt’s Sohag (Egypt)
(1 August 2017; Ahram Online)
Two separate incidents, both of people digging below their houses. This is dangerous.

Stolen Guercino painting will need a year of conservation (Morocco, Italy)
(1 August 2017; The Art Newspaper)
It has lost 30% of its paint; unclear what they are going to do.

Should a Museum Be Allowed to Sell $50 Million of Work to Keep the Lights On? (USA)
(31 July 2017; Artsy)
Deaccessioning and poor funding of museums.

The Antiquities Act of 1906: No president is licensed to revoke national monuments (USA)
(1 August 2017; The Washington Times)
“A successor president may not repeal the law by a proclamation renouncing his predecessor’s signature.”

From a “Rothko” to a “Renoir,” New Exhibit Features Fakes that Fooled the Art World (USA)
(1 August 2017; Artsy)
Treasures on Trial: The Art and Science of Detecting Fakes on at the Winterthur Museum, Delaware

Despite smuggled antiquities purchase, some say criticism of Bible museum is unfair (USA)
(3 August 2017; Salt Lake Tribune)
Alleging inaccurately that those scholars who are upset about the Greens buying looted antiquities are so because they are Evangelical Christians.

Somebody Stole Artist Kristin Stransky’s Artworks. She Wants to Know Who (USA)
(3 August 2017; Westword)
The missing “FabLink 3-D-printed dress required ten pounds of nylon fiber, more than 800 hours of 3-D printing time, and 150 to 200 hours of assembly and fabrication time to make”

One of Knoedler’s Rothkos Is Heading to a Museum—for a Forgery Exhibition (USA)
(3 August 2017; ArtNet News)
On loan to Delaware’s Winterthur Museum by the lawyer for Ann Freedman, the Knoedler Gallery’s ex director.

Ancient Vase Seized From Met Museum on Suspicion It Was Looted (USA, Italy)
(31 July 2017; New York Times)
Christos Tsirogiannis notified the museum about the issue years ago and got no reply. He then contacted the DA’s office who moved to seize the piece.

Met Museum Turns Over Another Relic With Disputed Past to Prosecutors (USA, Lebanon)
(1 August 2017; The New York Times)
On loan to the met from Lynda and William Beierwaltes who don’t believe that Lebanon has proven that the piece was taken from Byblos during the civil war.

U.S. tug of war over disputed relic from Lebanon (USA, Lebanon)
(4 August 2017; The Daily Star)
“Lynda and William Beierwaltes initially purchased the head in 1996 from a London dealer, who had bought it from an art dealer in Switzerland”

Movies From Alice Springs to Buckingham Palace: the fight for Albert Namatjira’s legacy (Australia)
(4 August 2017; The Guardian)
Film “traces his family’s quest for justice after losing the copyright to his work”

When Picasso Went on Trial for Stealing the Mona Lisa (France)
(1 August 2017; Artsy)
He wasn’t the thief, but he had stolen OTHER stuff from the Louvre.

Paris Space Invaders street art stolen by ‘city workers’ (France)
(4 August 2017; BBC News)
More than a dozen pieces by Invader are thought to have been taken.

Thieves damage Koki Tanaka work at Sculpture Projects Münster (Germany)
(1 August 2017; The Art Newspaper)
Technical equipment that was part of a work in a University building.

Not a Pretty Picture: Modigliani Exhibit Closes Amid Claims of Forgeries (Italy)
(2 August 2017; Live Science)
The questionable works have been confiscated and a complaint has been filed with the TPC

Antiques smuggling: ‘Kingpin’ loaned artefacts to museum to get legal tag (India)
(31 July 2017; The Times of India)
The Antiquities act says antiquities kept in a museum don’t have the same registration requirements.

Ancient temple chariot from Tamil Nadu on sale for Rs 96 lakh (India)
(2 August 2017; The Times of Israel)
It could be over 100 years old and could be being sold illegally

Idol theft Temple officials including priests in TN booked for theft of six ancient idols (India)
(3 August 2017; DNA)
Those expected to protect ancient idols are those who are being arrested for their theft.

6 stolen idols worth Rs 8 cr found in WB (India)
(6 August 2017; DNA)
They had fake documents meant to help smuggle the pieces, including one from NASA (?!)

The real cost of looting (Myanmar)
(3 August 2017; Fontier)
“How many of us would actually hand back family heirlooms to a museum in a country we’ve never visited?”

Slamming sale of fake Sadequains, media asked to raise awareness (Pakistan)
(3 August 2017; The News)
Sadequain did not believe in private ownership and gave his works away; there seems to be no law to punish dealing in fakes.

Duterte halts hunt for $10bn Marcos hoard (Philippines)
(28 July 2017; The Times)
“Sceptics see the decision to end the search as another step towards the political rehabilitation of the Marcos family”

OPINION: US should give Balangiga Bells back to Philippines, then leave Duterte to China (Philippines, USA)
(31 July 2017; Marianas Variety)
Bells taken in 1901 by US troops.

Iraq eager to get back antiquities smuggled to US (Iraq, USA)
(3 August 2017; Al Monitor)
Hobby Lobby pieces will go back when a final verdict is issued on the case.

Arrest of Jerusalem antiquities dealers opens a smuggling Pandora’s Box (Israel)
(1 August 2017; The Times of Israel)
“Highlights the fraudulent use of Israeli law in the dealing of artifacts looted across the Middle East.”

The Artist Didn’t Steal From Auschwitz, but Rather, From Other Artists (Israel, Poland)
(2 August 2017; Haaretz)
Saying that Rotem Bides maybe not stolen artwork is interesting.

Aleppo’s Old City can be rebuilt, UNESCO official says (Syria)
(3 August 2017; Reuters)
“Our vision is to rebuild the Old City exactly as it was before the war, with the same stones where we can”

Rare bicycle stolen from Williton’s Bakelite Museum (UK)
(3 August 2017; Somerset County Gazette)
“Keep your eyes peeled for a strange plastic bicycle, possibly abandoned as it would be too difficult to ride”