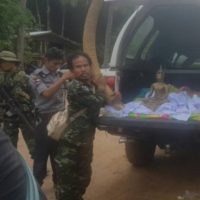 Why Are Artworks Pulled from Auction?
(13 July 2017; Artsy)
Many reasons, including legal trouble or suspicion of forgery.

Why archaeological antiquities should not be sold on the open market, full stop
(13 July 2017; The Conversation)
Important words from the Alice Stevenson, Senior Lecturer in Museum Studies at UCL’s Institute of Archaeology.

How Freeports Operate on the Margins of the Global Art Market
(14 July 2017; Artsy)
“Gaming the global legal patchwork is part of effective business practice today,”

Buddha stolen ahead of ‘Dalai Lama’s visit’ (Botswana)
(11 July 2017; Mmegi Online)
500 kg statue taken from a Gaborone North temple, but they don’t think it was tied to the Dalai Lama’s visit

AUC hands over to Egypt 5,000 artifacts from past archaeological excavations (Egypt)
(16 July 2017; Ahram Online)
“Though we legally possessed these artifacts and scrupulously preserved and protected them over so many years, we took the initiative to transfer these important antiquities to the Ministry of Antiquities because we felt that this should be their rightful home.”

Edmonton artist turns to public for help after carload of paintings stolen (Canada)
(11 July 2017; Edmonton Journal)
Chris Riley’s car was stolen with 36 of her paintings inside

Cultural gem or ‘tax grab’? $20M in Annie Leibovitz photos caught in Canadian quandary (Canada)
(12 July 2017; CBC)
Gift was “Flagged by the Canada Revenue Agency as a potential tax shelter that could profit the donors.”

Galeón San José: Galleons of gold (Colombia, Spain)
(12 July 2017; The Bogota Post)
Both Spain’s and a private salvage company’s claims to the wreck have been dismissed.

You Directly Copied the Series’: Brad Troemel Accuses Fashion Designer of Ripping Off His Grid Work for Ready-to-Wear Collection (USA, Russia)
(10 July 2017; Art News)
Vika Gazinskaya’ collection is inspired by Troemel but it is infringement?

Native American Artists to Lawmakers: Clamp Down on Counterfeiters (USA, Germany)
(12 July 2017; Voice of America)
As much as 80% of the “Indian” art offered for sale online are is not made by Native Americans

Investigator ‘convinced’ $580M of stolen art from Boston museum is hidden in Ireland (USA, Ireland)
(12 July 2017; Fox News)
Arthur Brand is basing this on IRA leads, but Antony Amore at the museum says that this has been thoroughly investigated.

They stole the chicken noodle soup can art from museum — but left the pepper pot (USA)
(11 July 2017; The Wichita Eagle)
Over a year since the theft and no word of the Warhols

Appeals Court Revives 16-Year Lawsuit over $40 Million Nazi-Looted Pissarro (USA, Spain)
(10 July 2017; Artsy)
Possibility that the museum knew that the painting was stolen when it bought it has opened this door.

Nazi-looted Pissarro case can go ahead, says US appeals court (USA, Spain)
(11 July 2017; The Art Newspaper)
The painting is in the Thyssen-Bornemisza Collection Foundation in Madrid

Hobby Lobby emboldens a black market that robs countries of their heritage — and lets the violent profit (USA, Iraq, Israel, Untied Arab Emirates)
(9 July 2017; The Washington Post)
“It is hard to buy Hobby Lobby’s depiction of itself as a novice making ‘regrettable mistakes.'”

Why the Feds Were Smart Not to Throw the Book at Hobby Lobby for Buying Iraqi Loot (USA, Iraq, Israel, Untied Arab Emirates)
(12 July 2017; ArtNet News)
By Leila Amineddoleh who served as a legal expert on cultural heritage to the Eastern District of New York on the case.

Belgium is the “weak link” in the fight against trafficking in cultural property (Belgium)
(14 July 2017; The Brussels Times)
Because it foolishly, shamefully dismantled its Arts and Antiquities unit in 2016.

#SecurityUnion: Cracking down on the illegal import of cultural goods used to finance terrorism (General)
(13 July 2017; EU Reporter)
The new rules apply to cultural goods that are at least 250 years old.

EU executive plans crackdown on plunder smugglers, militants (General)
(13 July 2017; Reuters)
A lot of tying antiquities trafficking to terrorism, but some interesting regulation as a result.

Germany makes arrests over theft of giant solid-gold coin (Germany)
(12 July 2017; BBC News)
It is thought that the coin was broken up and sold as scrap gold.

Four Are Arrested in Theft of Giant Gold Coin From Berlin Museum (Germany)
(12 July 2017; The New York Times)
One of the four was a museum security guard who provided information to facilitate the theft from the Bode Museum.

Pompeii Rises From The Ashes By Rejecting Its History Of Crime And Corruption (Italy)
(10 July 2017; Forbes)
New restorations, new facilities, new events, trying to move away from bad press.

Amsterdam Airbnb Host Shoves South African Filmmaker Down Staircase (Netherlands)
(12 July 2017; Hyperallergic)
Collaborator and friend of the artist Zanele Muholi was pushed down stairs by a man who said “This is not Africa”

Art dealer faces jail over fraud case involving work by Rolling Stones (UK)
(14 July 2017; Gloucestershire Live)
“Charges concerned either the theft of works of art, pocketing a percentage of the proceeds from the sale of art, or falsely claiming to be entitled to sell artworks owned by clients.”

Villagers refuse to relinquish artefact (Cambodia)
(11 July 2017; Khmer Times)
They argue that it should stay in their local pagoda and not with the government’s culture ministry.

Tomb Robbing, Perilous but Alluring, Makes Comeback in China (China)
(15 July 2017; The New York Times)
“It’s a constant battle between us and the criminals,” said Wang Jinqing, head of cultural relics protection in the Shaanxi provincial bureau of cultural heritage.

Dutch court to hear Buddha relic case (China, Netherlands)
(11 July 2017; Global Times)
This isn’t just a statue, it is an identifiable person that the Dutch collector is seeking to own.

Chinese villagers to claim back stolen mummy Buddha in Dutch court (China, Netherlands)
(13 July 2017; ECNS)
A good break down of several of the key issues in this case.

The story of paintings going missing is hardly new (India)
(13 July 2017; The Asian Age)
Paintings bought by an institution when an art lover is at the helm risk being forgotten (and stolen) when leadership changes.

Idols worth over a lakh stolen from Iskcon temple in Greater Noida (India)
(15 July 2017; Hindustan Times)
Twin idols of Gaura and Nitai were taken, along with a donation box.

Idol theft: DSP seeks advance bail (India)
(10 July 2017; The Hindu)
The police officer denies that he was involved in smuggling the idols that he was meant to protect.

Big cases yet to be cracked (India)
(11 July 2017; The Hindu)
“Sources point out that there has been little progress in the investigation against Sanjeevi Ashokan, a main supplier of smuggled idols to international smuggler Subhash Kapoor”

Idols worth crores yet to be recovered from abroad (India, Nepal, Hong Kong, Singapore)
(11 July 2017; The Hindu)
Taken from Tamil Nadu temples, sent to the Indo-Nepal Art Gallery in Mumbai, then taken to taken to Hong Kong, the U.S., the U.K., Singapore and Australia, via Nepal or Kolkata.

Cost of Trinkets: A Growing Archaeological Looting Network Between Thailand and Myanmar (Myanmar)
(12 July 2017; The Irrawaddy)
An interesting longer read on looting in the region by Phacharaphorn Phanomvan, a D.Phil candidate at Oxford

Pakistan yet to bring back stolen Buddha artefact from US (Pakistan, USA)
(10 July 2017; Dawn)
It was seized in New York in 2016 but the Department of Archaeology and Museum found out only last month that the US was still waiting on Pakistan to take it away.

Palestinian caught trying to smuggle rare, ancient coins from Gaza (Palestine, Israel, Egypt)
(16 July 2017; The Times of Israel)
“Allegedly smuggled from Egypt into the Gaza Strip and were en route to Israel for sale”

Hands Off the Antiquities (Syria)
(15 July 2017; The America Interest)
“Cultural heritage policy is far more than a matter for law enforcement”

Salvador Dalí’s Body Will Be Exhumed Next Week as Surreal Paternity Battle Comes to a Head (Spain)
(14 July 2017; ArtNet News)
“A psychic’s quest to prove that she is Salvador Dalí`s daughter is one step closer to fruition”

Can a Monkey Make Money Off Its Art? PETA Presses the Courts to Grant a Macaque Copyright Protection (USA)
(12 July 2017; ArtNet News)
Or is an non-human animal a property owner and not property in itself.