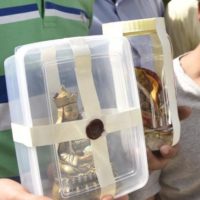 117 years later: SEE stolen artifacts Britain returned to Nigeria (Nigeria, UK)
(9 June 2017; NAIJ)
Looted from the palace of the Oba of Benin by the British in 1897.

Institute of Archaeology says cultural heritage being destroyed in Corozal (Belize)
(9 June 2017; Breaking Belize News)
The Maya site of Louisville in Corozal has been looted for construction material.

Ancient Skulls to be given to M’Chigeeng First Nation (Canada)
(6 June 2017; My Espanola Now)
A dog may have dug up the remains and they are going back to the First Nation.

United States and Peru extend MoU on archaeological heritage protection (Peru, USA)
(7 June 2017; Andina)
For another 5 years the import of illicit Peruvian antiquities will be barred in the US

Photographer Sues Forever 21 and Urban Outfitters over Use of Tupac Image (USA)
(5 June 2017; Artsy)
“Clinch asserts that Tupac’s estate passed along the images purporting to claim ownership, when in fact, he holds their copyright.”

Skip the fake, snag the masterpiece (USA)
(5 June 2017; Harvard Gazette)
“The art market is a seductive siren, but it’s also a minefield”

“Cattle Thief” Rustles Calf Statue From Yard On North Side (USA)
(6 June 2017; CBS)
The sculpture had been in the yard for 8 years.

Cops: Trio used art as distraction in wallet theft at Roswell gallery (USA)
(7 June 2017; Atlanta Journal Constitution)
Thieves pretended to want to buy a painting and stole a purse instead.

Taubman show goes on despite art theft (USA)
(7 June 2017; The Roanoke Times)
“Flower Bomber” was stolen along with a rental truck parked outside the artist’s studio.

Former Sothebys Specialist Faces Extradition to US Over Ponzi Scheme Worth Millions (USA, UK)
(7 June 2017; ArtNet News)
Claims that “Sammons was engaged in a ‘Ponzi scheme’ to acquire art from collectors while promising to find a buyer”

Frank Ocean Has Been Accused of Stealing the Art for His blondedRadio Show (USA, Germany)
(8 June 2017; Complex)
There are clear similarities between the two works.

Discovery or Hoax? News Site Claims Caravaggio Painted Leonardo’s Portrait (USA)
(9 June 2017; Hyperallergic)
I doubt many will be rushing to buy this piece.

Will Bears Ears Remain a National Monument? (USA)
(9 June 2017; The Atlantic)
Making an agreement with tribes for preservation, only to break it.

Police: ‘$2 million in paintings’ stolen from Abilene motel (USA)
(5 June 2017; KTXS)
Hmm: “According to police, Denzler painted the art himself and is also the one who estimated their worth.”

Abilene PD brushes off value of stolen paintings (USA)
(9 June 2017; Abilene Reporter-News)
Turns out the police doubt the high values that the owner placed on the paintings.

Professor Helps Bust Italian Art Theft Ring (Italy)
(6 June 2017; Smithsonian)
He noticed a manuscript had been stamped with the seal of the Royal Library of Turin.

Owner of stolen Colourist paintings expresses disgust at collapse of court case (UK)
(5 June 2017; The Herald)
The case concerns a 2001 theft and charges against those suspected were dropped.

Police launch investigation after a fire at the SeaCity museum in Southampton (UK)
(7 June 2017; Daily Echo)
Cash was stolen from the museum cafe till during the evacuation for this suspicious fire.

How this exam artwork was stolen from a car, dumped by bins and later mysteriously returned to its owner (UK)
(9 June 2017; Gloucestershire Live)
She posted about her loss on Facebook and someone spotted her works in a bin.

Vandalism at ancient Clava Cairns burial site (UK)
(7 June 2017; BBC News)
Also “seventeen years ago, a Belgian tourist took a stone from one of the cairns as a souvenir before returning it after complaining it had cursed his family.”

The fine art of forgery to be on display (New Zealand)
(7 June 2017; Manawatu Standard)
The forger changed his name to Carl Feodor Goldie so he could legally sign “Goldie” to his forgeries.

China’s ‘stolen’ cultural relics: why the numbers just don’t add up (China, UK)
(9 June 2017; Post Magazine)
An argument that China’s loss from the Summer Palace looting is over stated.

900-year-old Antique Buddha Idol Stolen From Tawang, Recovered in Delhi (India)
(5 June 2017; News 18)
Following a tip that a group was trying to sell the idol.

Rs 200-crore ancient idols, seized from thieves, rot at museum (India)
(5 June 2017; The Times of India)
Idols seized in recent raids are allegedly not being properly cared for

About 100 stolen antique idols are untraceable in Telangana (India)
(6 June 2017; The Times of India)
Police are saying that once every six months an idol is stolen and sold in the city. Some figures place it higher.

Ancient artifacts from Mosul Museum found in IS home (Iraq)
(6 June 2017; K24)
This may indicate that missing museum items are still around Mosul.

6th-century priest sculpture stolen from museum in southwestern Turkey (Turkey)
(8 June 2017; Daily Sabah)
It was taken from the garden of the museum between the Yalvaç Court House and the Government Office.

The art born of destruction (General)
(7 June 2017; The Economist)
“How artists have variously explored the annihilation of cultural heritage or human life”

Temperature rises by almost one degree at ancient Altamira cave (Spain)
(7 June 2017; iNews)
This could lead to condensation which may destroy the paintings.

Banksys Plan to Sway UK Voters With Free Art Got Nixed Because It Was Totally Illegal (UK)
(6 June 2017; ArtNet News)
It is illegal to accept a gift in return for voting or not voting. Sorry all!

World’s most prolific Star Wars collector appeals to fans after ‘devastating’ theft (USA)
(5 June 2017; The Guardian)
“His own saga in which $200,000 in collectibles were allegedly stolen from his California museum by a man he once considered a friend”