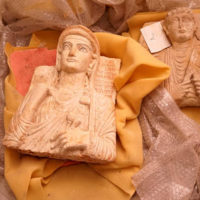 Hot this week: Genocide as a repatriation roadblock

Why It’s So Hard to Find the Original Owners of Nazi-Looted Art
(31 May 2017; Smithsonian)
Problems with provenance and the importance of provenance research.

Selfies Add to Museum Hazards
(2 June 2017; Claims Journal)
People looking at their phones are people who are not looking what they are bumping in to

US museum returns ancient Egyptian stele missing since WWII (Egypt)
(30 May 2017; Phys.org)
Kelsey Museum in Michigan has agreed to return the stela to The National Museums in Berlin. It had been assumed destroyed in aerial bombardment, but apparently not!

Paintings stolen from Nepean gallery (Canada)
(2 June 2017; CBC)
The two pieces were by a local artist in Ottawa.

Krannert Art Museum shining spotlight on art detectives (USA)
(28 May 2017; The News Gazete)
“I think a lot of museums are worried about what provenance researchers might find in their collections and might reveal through their exhibitions”

After decades-long saga, Lexington family settles claim for Nazi-looted art (USA, Austria, France)
(28 May 2017; The Boston Globe)
The Graf family, Austrian who fled and ended up in Massachusetts, has agreed to split the proceeds of the upcoming sale of the Michele Marieschi

Vietnam memorial wall in Venice restored (USA)
(29 May 2017; Fox)
The memorial had been vandalised twice recently.

Priceless regalia stolen in Pendleton (USA)
(2 June 2017; East Oregonian)
The items were over a century old and had importance cultural and historical significance to victim’s family and tribe.

Former Contractor Sues Dale Chihuly, Claiming He Helped Create Artwork (USA)
(3 June 2017; The New York Times)
Lawyers for the artist counter that this is a handyman, not an assistant, who is trying to take advantage of Chihuly’s illness.

Sam Durant’s controversial Scaffold to be dismantled and burned (USA)
(31 May 2017; The Art Newspaper)
This was after mediation with Dakota elders.

Ideas about art sometimes cause real damage to people (USA)
(2 June 2017; Star Tribune)
“Walker Art Center not only failed to talk to Native Americans before erecting “Scaffold” but also failed to understand its multiple meanings.”

Why did the Nazis steal so many books? (Germany)
(28 May 2017; Salon)
“Scale of book theft during the World War II is immense, far dwarfing the already boggling numbers of Nazi art theft.”

Lost Since World War II, Egyptian Artifact Returns to Germany (Germany, USA, Egypt)
(1 June 2017; Live Science)
Wild story: thought to have been destroyed in bombing of Berlin, but found in a Uni Museum.

Notorious Italian art theft ring foiled by Swedish academic (Italy, Sweden)
(28 May 2017; The Telegraph)
16th century prayer book had a Library of Turin stamp in it and the academic didn’t ignore it.

‘Stolen’ book of world leaders’ autographs turns up in Spain (Serbia, Spain)
(31 May 2017; The Local)
“We reported the case to police and they will inform Interpol… We are waiting for a response”

Art Basel Sues Adidas for Trademark Infringement (Switzerland)
(31 May 2017; Artsy)
Adidas didn’t have a license to use “Art Basel” on some limited edition shoes.

Swiss capital beefs up research team for Nazi-looted art (Switzerland)
(3 June 2017; Catherine Hickley)
“Bern is positioning itself as a Swiss hub for research into Nazi-looted art.”

REVEALED: The fake portrait among Ashmolean masterpieces (UK)
(30 May 2017; The Oxford Times)
Part of the programme ‘Fakes’, a work in the British Impressionism collection was replaced with a forgery.

Walkers’ rock piles damaging ancient features of the North York Moors (UK)
(31 May 2017; The Yorkshire Post)
1/3 of all protected ancient sites on the Moors have been damaged by this practice.

Indigenous groups in Canada call for National Museum of Scotland to return human remains (UK, Canada)
(30 May 2017; Common Space)
Scotland’s national museum is requiring a formal request, and there are issues with that.

A Northland man is under investigation by Heritage New Zealand for tampering with historic burial sites (New Zealand)
(27 May 2017; Stuff.co.nz)
When you promote your racist theories in the news by claiming that you’ve unearth human remains, the authorities are eventually going to come knocking

Man out to prove Māori not original settlers under investigation (New Zealand)
(30 May 2017; Radio New Zealand)
“If a member of the public came across human remains they should call authorities.”

Millions at stake as Chinese villagers take collector to court over “man in the Buddha” (China, Netherlands)
(2 June 2017; AFR)
“Counsel for the Dutch collector will counter that numerous museums and private collectors own mummies and Van Overeem’s is in any case not the one stolen from Yangchun”

Police to seek documents from Australian authorities (India, Australia)
(2 June 2017; The Hindu)
Temple staff members have been added to the list of people accused of being involved in the idol theft and smuggling.

One of S Koreas Most Famous Paintings, but by Whom? (South Korea)
(2 June 2017; Korea Exposé)
‘She claimed the painting in it was forged, and uttered the now-legendary line: “Would a mother not recognize her own child?”’

From the moon to Kansas to Sotheby’s: Bag could bring $2 million-plus at auction (USA)
(29 May 2017; The Kansas City Star)
Stolen, sold, recovered, sold (by accident), retained, now sold.

Two Nooses Discovered at Smithsonian Museums This Week (USA)
(31 May 2017; Hyperallergic)
One at the National Museum of African American History and Culture, one at the Hirshhorn.