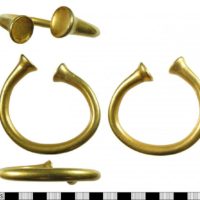 AUC hands over Egyptian artefacts from 1964 excavation in Fustat (Egypt)
(13 June 2017; Ahram Online)
Legally partaged, but the Uni has done the right thing in handing them over to Egypt.

Encroachments made since 2011 removed from Egypt’s Dahshur Necropolis (Egypt)
(15 June 2017; Ahram Online)
Made during the aftermath of the 2011 revolution, inhabitants said to be compensated with other land.

El Gobierno entrega siete obras del siglo XVIII a Taraco (Government returns seven work from the 18th century to Taraco; Bolivia)
(13 June 2017; Página Siete)
These were the painting not stolen in a theft and removed for safety and upkeep in 1995.

Renewed demand made to Scotland for return of stolen native American skulls (Canada, UK)
(12 June 2017; iNews)
The museum awaits a formal request and will deal with the case according to published policy.

The scalp from Sand Creek (USA)
(8 June 2017; Aeon)
“Does returning artefacts help to heal the scars of conquest?”

Agency returning tribal artifacts (USA)
(11 June 2017; Arkansas Online)
“Wilson said she has worked on behalf of tribes for about 20 years to repatriate items.”

Evidence in Gardner Museum thefts that might bear DNA is missing (USA)
(12 June 2017; The Boston Globe)
“Despite an exhaustive internal search, the FBI has been unable to find the missing evidence in the Isabella Stewart Gardner Museum art heist.”

Art pieces created for the Taubman, stolen and recovered in NYC (USA)
(13 June 2017; WDBJ)
The truck that Paul Villinski’s piece was in was stolen then recovered.

Native American artifacts worth thousands stolen from Durango storage (USA)
(13 June 2017; Durango Herald)
“Former archaeologist” says they were got legally but had decided to stop buying: “I figured it wasn’t right that they should be bought, so I just stopped.”

Son attempted to sell painting stolen from mother’s Portland home to N.Y. art gallery for $60,000, feds allege (USA)
(16 June 2017; The Oregonian)
Gallery became suspicious when they were given multiple addresses to send the money to; Tom Wesselmann’s “Study for Monica with Tulips”

Art thief swipes $12M in paintings from Queens storage unit (USA)
(16 June 2017; Daily News)
Stella and Toulouse-Lautrec among the casualties, or so says the owner in this strange case.

U.S. Moves to Seize Diamonds, a Picasso and Hollywood Films in Malaysian Case (USA, Malaysia)
(16 June 2017; The New York Times)
Picosso given to Leonardo DiCaprio is on the dock for being seized in a case against the 1MDB fund

Historian Charged In Federal Court With Theft Of Government Records From The National Archives (USA)
(15 June 2017; Southern Maryland News Net)
“DeHays sold the stolen dog tags on eBay” and gave one tag to a museum.

Getty agrees to return 1st century BC sculpture to Italy (Italy, USA)
(13 June 2017; Los Angeles Times)
“Statue of Zeus Enthroned”, from the Fleischman collection, matched a fragment from Naples in the possession of the Italian government.

Demonstrators Rally Against the Destruction of Banksy’s Iconic Brexit Mural (UK)
(16 June 2017; ArtNet News)
It is on a building that is set to be demolished.

The forger who fooled the art world (UK)
(17 June 2017; The Spectator)
Lots of claims from Shaun Greenhalgh

‘You’ve got to be joking’: Brazen art theft in Swan Valley caught on CCTV (Australia)
(11 June 2017; WA Today)
All 25 kilograms of portrait ripped off the wall.

Man charged with WA winery painting theft (Australia)
(15 June 2017; AAP)
Wine bus tour and a run into the bush, not the best getaway

2 arrested for trying to smuggle out antique idol (India)
(12 June 2017; Millennium Post)
Two youths were found to be carrying the stolen idol in a bag.

A month later, burglar caught in Ulhasnagar with jewellery stolen from Challiaha temple (India)
(17 June 2017; The Times of India)
Caught when he tried to sell the temple items at a jewellery shop

Officials start fencing seized stone idols at Egmore govt museum (India)
(17 June 2017; The Times of India)
More than 250 confiscated idols are in the space but there has been criticism of their upkeep.

Diamond in the bluff: Koh-i-noor stories lose their shine (India, UK)
(14 June 2017; The Guardian)
“The diamond has never been more controversial.”

Koh-i-Noor: The History of the World’s Most Infamous Diamond – review (India, UK)
(18 June 2017; The Guardian)
Review of a new book about this infamous, contested diamond.

Audit report shows 227 artefacts missing from Bahawalpur museum (Pakistan)
(18 June 2017; Dawn)
227 are missing or destroyed and 5 are known to be stolen

Ancient carved tusks stolen from Karen village (Thailand, Myanmar)
(10 June 2017; Bangkok Post)
They were sacred objects in the village and are thought to have been taken across the Myanmar border.

Stolen tusks returned but suspected ‘hermit’ thief still at large (Thailand, Myanmar)
(12 June 2017; The Nation)
A positive outcome but the suspected thief, a village headman, had not been located.

Teenagers rescued from Paris catacombs after three-day ordeal (France)
(14 June 2017; The Guardian)
Only a limited portion of the catacombs are meant to be accessible for this reason.