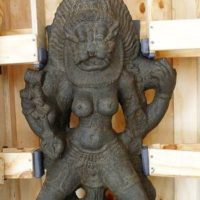 Hot this week: Gods return from Australia to India

Antiquities Trafficking and Art Crime FREE online course starts next week. Why not join us? You can sign up here: https://www.futurelearn.com/courses/art-crime

Egypt says it retrieved 4 stolen artefacts from Britain (Egypt, UK)
(24 May 2017; Middle East Monitor)
“Two of the artefacts were displayed in an auction house in the UK while the other two pieces were in the possession of an antiquities dealer in London.”

Indigenous leaders unite for return of Beothuk remains, inclusion in MMIWG inquiry (Canada, UK)
(26 May 2017; CBC)
National Museum of Scotland pretty much is arguing that because Europeans genocided the Beothuk away there were no descendants to claim the skeleton so they don’t need to give it back.

Ex-attorney charged in connection to theft ring (USA)
(23 May 2017; Tribune Chronicle)
Antiques and historic artifacts worth $100,000 were stolen from a home

Jeff Koons accused of copying Ukrainian artist’s work (USA, Ukraine)
(25 May 2017; The Telegraph)
His reps say he has permission to use the work, however he had been telling an alternative origin story for it that left out artist Oksana Zhnikrup.

Swan statue stolen by naked man has been found in Florida (USA)
(26 May 2017; CBS)
Caught on CCTV naked and stealing a giant black-and-white checkered swan.

Purple Heart marker recovered (USA)
(26 May 2017; The Daily News)
Stolen from the Veterans Memorial and Park in Breitung Township, Michigan.

American Space Race Artifact Stolen and Put Up for Auction (USA)
(26 May 2017; Nonprofit Quarterly)
“Max Ary, the director of a Kansas space museum called the Cosmosphere, was convicted for stealing artifacts from the museum and selling them for profit.”

Copper thief targets county museum (USA)
(26 May 2017; The Courier-Times)
The loss of the scrap metal around the air conditioning unit at the Henry County Historical Society puts the artefacts housed inside at risk.

Dealer Perry Rubenstein cuts plea bargain, will serve jail time (USA)
(23 May 2017; The Art Newspaper)
He pleaded no contest to two charges of grand theft by embezzlement that relate to his bankruptcy.

Stolen statue featuring Mormon prophets is found by police; 2 suspects are arrested (USA)
(24 May 2017; Los Angeles Times)
In one piece, found thanks to an anonymous tip.

‘What’s wrong with people?’ Library mourns theft of statue wheeled out in broad daylight (USA)
(25 May 2017; The Sacramento Bee)
Fears that the Sacramento library statue will be scrapped.

Two arrested after theft of rare artifacts near Barnesville, Minn. (USA)
(25 May 2017; KFGO)
Vintage guns and other WWI and WWII artefacts taken.

2 Arrests Made in Theft of Nazi Memorabilia, Other Items (USA)
(26 May 2017; U.S. News)
Victim knows the suspects who are thought to have sold some of the items to buy drugs.

Rare historic coins return to Salzburg Museum 70 years after they were looted (Austria, USA)
(25 May 2017; The Art Newspaper)
“After purchasing the coins, the ANS began making inquiries in Austria to trace the legitimate owner.”

Pissarro painting in Gurlitt trove returned to heir of Max Heilbronn (Germany)
(23 May 2017; The Art Newspaper)
“German government researchers say another 150 works in the collection may have been looted”

LGBTI refugees stole a piece of art and the artist is loving it (Greece)
(25 May 2017; Gay Star News)
Art theft as protest art.

Greek police recover illegally excavated statue, arrest 2 (Greece)
(26 May 2017; The Republic)
The battered Classic statue was found under the front seat of a car near Corinth.

Looted statues, pottery returned to Italy after probe in NYC (Italy, USA)
(25 May 2017; ABC United States)
Looted in the 90s, smuggled to the US, no charges.

Controversial Italian court ruling ousts five top museum directors (Italy)
(26 May 2017; The Art Newspaper)
“Lazio regional administrative tribunal (TAR) ruled that the recruitment process was not transparent and that foreigners had never been eligible to participate under Italian law.”

Perth bids to ‘bring home’ the Stone of Destiny from Edinburgh as part of heritage plans (UK)
(23 May 2017; The National)
Could the famously stolen and re-stolen stone head back to Perth?

Cotswolds art dealer, 69, ‘stole paintings worth £1million including artworks by Rolling Stone Ronnie Wood from his clients’ (UK)
(23 May 2017; The Daily Mail)
Poole is accused of falsely claiming to have the right to sell paintings that he didn’t own.

‘I wasn’t cock-a-hoop that I’d fooled the experts’: Britain’s master forger tells all (UK)
(27 May 2017; The Guardian)
Shaun Greenhalgh tells all, or so he claims.

Tickets cancelled for Nitsch performance in Tasmania due to protest threat (Australia)
(26 May 2017; The Art Newspaper)
MONA is starting the ticketing process over again for the event which involves a bull carcass because of a plot to disrupt it.

Birthday girl, boyfriend arrested for art theft (China)
(22 May 2017; Global Tiems)
“We are 18 years old. We needed to do something we’ve never done before,” Li said.

GST impact: Auction of coins, stamps on hold (India)
(23 May 2017; The Hindu)
What will new regulation do to the Indian numismatics trade?

Missing gold locket of Ambalappuzha temple traced from cash boxes (India)
(23 May 2017; The Times of India)
The stolen locket was dumped in a cash box either out of remorse or because investigators were zeroing in on the culprit.

Is Ulhasnagar’s Chaliya Mandir’s stolen gold worth Rs 5 lakh or Rs 8 lakh? (India)
(25 May 2017; Mid-day)
Whatever the value, the religious items were stolen.

Prized sculptures returned by Australia on display now (India, Australia)
(23 May 2017; PTI News)
“900-year-old stone statue of Goddess Pratyangira, a third century rock carving of Worshippers of the Buddha and another sculpture called the ‘Seated Buddha'”

How idol thieves deceived devotees (India, Australia)
(27 May 2017; The Hindu)
Including the method of replacing idols with replicas so no one notices; works in situations where idols are covered in jewellery and offerings.

1,000-year-old ‘Narasimmee’ comes back to Tamil Nadu (India, Australia)
(27 May 2017; The Hindu)
“Stolen from the Vriddhagiriswarar temple in Vriddhachalam nearly 15 years ago” and returned form the National Gallery of Australia.

Ancient tomb seized from treasure hunters in central Turkey (Turkey)
(26 May 2017; Hurriyet Daily News)
Trying to sell it for $4 million, had a human skeleton in it.

Stolen moments: Taryn Simon on customs, counterfeits and the Russian media (Hong Kong, USA)
(26 May 2017; Wallpaper)
Contraband (2010) are photos from her archive of items seized at customs in the US.

Rome authorities defend controversial stage built amidst ruins for rock musical (Italy)
(24 May 2017; The Local)
Not everyone likes the idea of a rock musical on the Palatine Hill.