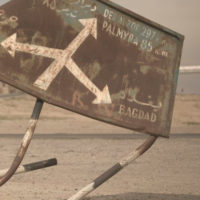 Weighing the Risks and Returns of Art and Antiquities
(28 February 2017; Wealth Management)
Lack of due diligence and poor provenance research puts any art buyer at risk. Don’t be like that.

Scientists Shoot Stones to Study War’s Impact on Heritage Sites
(28 February 2017; Smithsonian)
“The bullets caused hidden networks of fractures beneath the stones’ surfaces” and experts are studying them.

Attempts to Retrieve Artifacts from Abroad Not in Egypt Favor: Former Antiquities Minister (Egypt)
(2 March 2017; Egyptian Streets)
“Former Minister of Antiquities Mamdouh Al-Damaty” seems to be speaking out AGAINST the return of stolen antiquities. Yikes.

Man sentenced to life in prison in 2014 killing of Iraqi artist (USA)
(27 February 2017; The Sacramento Bee)
Artist Hassan Alawsi may have been targeted in part because he was Muslim.

Cheshire County Mother and Son Accused of Art Forgery Appear in Federal Court (USA)
(28 February 2017; NHPR)
“Lorettann Gascard claims she was a friend and former student of Golub, and that she acquired the paintings directly from the artist”. The buyer says they are fakes.

Artist Reunited with Jimmy Buffet Promotional Art After 17 Years (USA)
(1 March 2017; KSOO)
Unclear how it got to the person who returned it, but happiness all around.

Will New York Get Its Own Freeport for Art? ARCIS Plans a Tax Haven in Harlem (USA)
(2 March 2017; ArtNet News)
The next Geneva? Let’s hope not in *that* way.

Peter Guber Sues His Insurance Broker Over Stolen Bronze Head (USA)
(2 March 2017; Variety)
“Guber filed a lawsuit against Abacus Insurance Brokers, alleging that the company failed to properly advise him on policies when he took possession of the multi-million dollar antiquity”, but the case is far more complicated than just that.

Kennewick Man: Build bridges to prevent a repeat of ill will (USA)
(3 March 2016; Seattle Times)
“At this rate, the repatriation wars will not end”

Native American bones stolen from Ohio grave to be reburied (USA)
(2 March 2017; Turtle Island News)
Three men were sentenced to 30 days in prison and $1000 fine for digging up and selling the bones which seems like a light wrist slap.

A Suit Over Schiele Drawings Invokes New Law on Nazi-Looted Art (USA)
(27 February 2017; The New York Times)
The HEAR Act is about to be tested in court: heirs of Fritz Grunbaum are citing it in an attempt to recover two Schieles.

Christie’s eyes loophole to duck Nazi-confiscated art suit (USA)
(28 February 2017; New York Post)
Christies says that the new HEAR Act doesn’t apply to them because they don’t currently have the painting in question. They, of course, won’t say who bought the painting from them.

Bank’s Kandinsky painting was looted by Nazis, says family (USA, Germany)
(3 March 2017; The Guardian)
Bayerische Landesbank has the piece. Heirs have filed suit in a New York court to have it returned.

A Paris exhibit of Nazi-looted art honors a Europe many fear is under threat again (France)
(28 February 2017; The Washington Post)
Remembering Paul Rosenberg now in a time of division and unrest.

Ancient bronze statuette lost after the Second World War returns to Berlin (Germany, UK)
(1 March 2017; The Art Newspaper)
“In 1939, it was sent into storage to protect it from bomb damage and vanished without a trace.” A BM curator recognised it.

Why it’s so hard to return art stolen by Nazis (Poland)
(28 February 2017; The Christian Science Monitor)
“Thousands of pieces are still likely in circulation.”

Stolen painting finds way home (UK)
(27 February 2017; This is Wiltshire)
The paintings were stolen from an exhibition in the Link Centre, Swindon, in 1995.

Thieves take statue worth over £4,000 in art gallery break-in (UK)
(4 March 2017; The Herald)
The ‘distinctive’ statue was stolen during a break-in at a Devon gallery.

Reuniting Indigenous ‘sticks’ with their stories: the museum on a mission to give back (Australia)
(3 March 2017; The Guardian)
“The South Australian Museum wants to take a global lead in connecting its enormous collection with Aboriginal and Torres Strait Islander people”

Sentinels to guard Marayur dolmens (India)
(27 February 2017; The Hindu)
Guards have been appointed after several of the Marayur-Kanthallur dolmens have been vandalised or destroyed.

Nagpur University finally lodges FIR in coins theft case (India)
(3 March 2017; The Times of India)
This is after 10 months. An odd case where something wrong has occurred with the Uni’s ancient coin collection but feet are dragging.

‘Piece of paper’ for accused: Cops clueless on Satyarthi’s Nobel citation (India)
(5 March 2017; The New Indian Express)
They are working under the assumption that the citation was destroyed by thieves who thought it “just a piece of paper”.

Police recover 195 ancient gold coins from Tonk in 3 months (India)
(5 March 2017; The Times of India)
Working on tip offs, the coins were recovered from people who had failed to report their discovery.

Ghost ships: why are World War II naval wrecks vanishing in Indonesia? (Indonesia)
(26 February 2017; The Conversation)
On why people ‘steal a ship’ and awareness raising regarding protection of underwater heritage

In Mosul, a long-term battle to repair Iraq’s heritage (Iraq)
(26 February 2017; The Jordan Times)
France Desmarais noted that there was “a long and tragic history of trafficking in cultural objects from northern Iraq.”

Previously untouched 600BC palace discovered under shrine demolished by Isil in Mosul (Iraq)
(28 February 2017; The Telegraph)
News discoveries in looters trenches. Not quite a bright side, but a point of salvage and forward movement.

Jordan demands Israel halts works at Jerusalem’s Umayyad Palaces (Jordan)
(1 March 2017; The Jordan Times)
If true this may violate the delicate agreement over the site’s preservation

Palmyra: Syrian forces ‘completely retake’ IS-held town (Syria)
(2 March 2017; BBC News)
Heritage, yes, but also people are caught in this back and forth. Let’s have no cringe-worthy Russian concerts this time, okay?

Less damage to ancient Palmyra than feared, Syrian antiquities chief says (Syria)
(3 March 2017; Reuters)
Yes new damage since the last time the site was retaken, but Abdulkarim says no more than was already known about.

Priceless 18th century icon seized in car trunk in Turkey’s Adana (Turkey, Syria)
(22 February 2017; Hurriyet Daily News)
The men stopped with the piece claimed it came from a Syrian who owed them money.

Old fisherman still homesick (Turkey, Germany)
(4 March 2017; Hurriyet Daily News)
“The body of a sculpture that was smuggled from Aphrodisias in 1904 is still in Berlin.”

Photo showing party inside ancient Egypt tomb sparks outrage (Egypt)
(1 March 2017; Al Arabiya)
The tomb is in El Dakhla Oasis, and the people in it are restorers. The official line is that it shouldn’t have happened but it was old news.

An Online Exhibition Asks: What Makes “The Goldfinch” So Special? (Netherlands)
(1 March 2017; Hyperallergic)
You know it from the eponymous art theft book by Donna Tartt.

Rare crocodile shark found for the first time on UK beach could have been victim of exotic wildlife traders (UK)
(2 March 2017; The Telegraph)
Was it dumped on the way to the UK? It would have died the moment it hit cold northern water.

Anti-Fascists Clash with White Nationalists at the Minneapolis Institute of Art (USA)
(3 March 2017; Hyperallergic)
“The altercation took place outside and inside the museum. No artworks were damaged.”