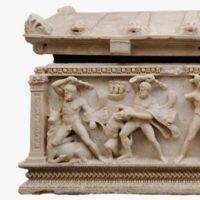 Hot this week: Your round up late because I’m on holiday.

Chad’s ancient Ennedi cave paintings defaced (Chad)
(20 March 2017; BBC News)
‘The graffiti drawn on the paintings, which are about 8,000 years old, was “a tragedy… offensive to the whole history and memory of Chad”‘

Photos of Guercino painting, rolled up like a rug by thieves, reveal extent of damage (Morocco, Italy)
(22 March 2017; The Art Newspaper)
Brace yourself, the photos are painful. Art theft is not pretty.

Who owns a photograph? Goldblatt archive should remain in Cape Town (South Africa, USA)
(18 March 2017; Times Higher Education)
This appears to be in response the the University of Cape Town removing works of art and putting them in storage due to student demonstration.

Jail time for man who sold stolen plaques, sculpture (Canada)
(19 March 2017; The Whig)
The man stoke three plaques and a sculpture from sites around Kingston.

Forever 21 Accused of Copying Charles Smith’s Design Concept (USA)
(22 March 2017; Teen Vogue)
The artists says the “Do Not Touch” sports bra idea is his and the profits from his go to charity.

What Should You Do With Your Father’s Nazi Keepsake? (USA, Germany)
(22 March 2017; The New York Times)
Inheriting spoils of war, an ethical dilemma.

Vietnam War memorial in Venice vandalized by taggers again (USA)
(23 March 2017; Los Angeles Times)
This “amateurish” tagging seems not to be connected to prior vandalism at the site.

Woman found fatally stabbed in home near Capitol Hill (USA)
(23 March 2017; The Washington Post)
Artist Corrina Mehiel was temporary living in DC to help with an exhibition at the Corcoran School of the Arts and Design.

A mock trial at the Art Institute revisits the dicey question of who owns culture (USA)
(23 March 2017; Chicago Reader)
It was set up by the National Hellenic Museum. Eight of twelve jurors voted to return the Marbles as did all the judges but one.

Man caught selling thousands of dollars’ worth of stolen Nevada Museum Antiques on Ebay (USA)
(25 March 2017; 3 News)
A local man stole glass bottles from the Friends of Rhyolite collection which he sold on eBay.

Prosecutors seek 4 years for ex-Field Museum worker who stole nearly $1 million (USA)
(21 March 2017; The Chicago Tribune)
Benson pled to stealing about $400,000 but the museum says it was more.

Dana Schutz’s Painting of Emmett Till at Whitney Biennial Sparks Protest (USA)
(21 March 2017; ArtNet News)
“It’s not acceptable for a white person to transmute Black suffering into profit and fun”

Social Media Erupts as the Art World Splits in Two Over Dana Schutz Controversy (USA)
(24 March 2017; ArtNet News)
Division over a white artists portrayal of the murdered African American Emmett Till at the Whitney Biennial.

Donors urged to guard heritage threatened by war, extremism (France, Syria, Iraq)
(20 March 2017; The Daily Mail)
France has pledged $30mil to the fund but wants to raise another $100mil from private donors

Strike at the Musée Rodin Steals Thunder of Major Survey of the Artist at Grand Palais (France)
(24 March 2017; ArtNet News)
The museum has been closed fro two days because of a strike about the working conditions of front desk and security staff.

Irishman known as the King of the Travellers loses $20MILLION libel suit against US magazine’s piece on his involvement in rhino horn theft (Ireland, USA)
(22 March 2017; The Irish Sun)
O’Brien’s sons and relations have been convicted of offences related to antiquities and rhino horn theft and smuggling.

11 arrested for desecrating Auschwitz (Poland)
(24 March 2017; Arutz Sheva)
They apparently slaughtered a sheep, took their clothes off, hung a banner that said “love” and chained themselves together in front of the gate. It sounds like someone was trying for art here.

Performance artists living in exile in the UK might be forced to return to Poland (Poland, UK)
(24 March 2017; The Art Newspaper)
Władysław Kaźmierczak and his partner Ewa Rybska may be sent back due to a 2008 European Arrest Warrant for charges that relate to misuse of funds.

Serbia returns precious stolen violin to France (Serbia, France, Italy)
(23 March 2017; Yahoo News)
The violin was among other items taken from a Paris home and was located when an Italian luthier was contacted about buying it.

Orkney ‘Viking’ totem pole vandalised (UK)
(19 March 2017; BBC News)
The 15 year old piece, which was created by locals and by visiting Cree Native Americans, had a chain put around it and it was pulled by a vehicle.

Destiny? Perth formally asks Crown for the Stone of Destiny back for 2021 bid (UK)
(20 March 2017; The Herald)
Stolen from the Scots. Stolen from Westminster Abby. Now in Edinburgh Castle. Will it go to Perth?

Bruton theft saw £2.5m worth of paintings and jewellery stolen and woman tied up overnight (UK)
(20 March 2017; Somerset Live)
The Somerset art theft which happened in March 2009 still is not solved.

Idols worth lakhs found missing from temple (India)
(21 March 2017; The Times of India)
The piece was stolen from stolen from Kali Mata Temple near Nahargarh Park, Jaipur

Three burglars held, stolen items worth thousands recovered (India)
(21 March 2017; The Times of India)
Among other things recovered from the burglars was a silver idol.

Malayan relics stolen from museum (Indonesia)
(23 March 2017; The Jakarta Post)
The seven pieces stolen from the Sang Nila Utama Museum date back to the Malay sultanates.

Lowest bidders threaten Nepal’s quake-hit heritage (Nepal)
(24 March 2017; The Daily Mail)
“We don’t believe the cheapest contractors will rebuild our temple sincerely. We demand that the government dismiss such a system.”

FIA initiates inquiry into ‘disappearance and theft’ of art from PNCA (Pakistan)
(24 March 2017; Dawn)
134 pieces were takin from the Pakistan National Council of Arts in Islamabad.

First high court hearing on stolen Buddhist statue upcoming (South Korea, Japan)
(20 March 2017; Yonhap News Agency)
This is an appeal against the decision to return the statue to a South Korean temple after it was stolen from a Japanese one.

Red list of Iraqi artifacts available in Turkish (Iraq, Turkey)
(23 March 2017; Hurriyet Daily News)
It is being distributed to museums, security, collectors, and customs in Turkey.

6,000-year-old relic handed to Saudi government (Saudi Arabia)
(21 March 2017; Arab News)
A positive story of someone finding an antiquity and doing the right thing by reporting it. Not doing so is against the law.

Saving Syria’s heritage: Archaeologists discover invisible solution (Syria)
(21 March 2017; BBC News)
I am having trouble determining what problem this solves. It doesn’t prevent theft and is just as much a recovery aid as a photo, maybe less of one.

Ancient sarcophagus to be returned to Turkey nearly 60 years after it was stolen (Turkey, Switzerland)
(24 March 2017; Daily Sabah)
“The sarcophagus, which depicts the Twelve Labors of Hercules and was smuggled out of southern Turkey’s ancient Anatolian city of Perge in the 1960s”

UAE pledges $15m to protect heritage sites in conflict areas (UAE)
(20 March 2017; The Gulf Today)
This was at the conference held in the Louvre Museum which raised promises of over $75 million.

Replica of artefact destroyed by ISIS announced as London’s next Fourth Plinth installation (UK, Iraq)
(21 March 2017; Dezeen)
The bull is by Iraqi-America Michael Rakowitz, is made out of date syrup cans, and is called “The Invisible Enemy Should Not Exist”

Chinese police arrest dinosaur-egg bandit (China)
(20 March 2017; The Straits Times)
The man arrested contacted the victim twice before stealing the eggs, pretending to want to purchase from him.

Dinosaur Egg-Stealing Spree Leads to Arrests in China (China)
(21 March 2017; ArtNet News)
Four were arrested and 27 out of 80 eggs which belong to a collector have been recovered.