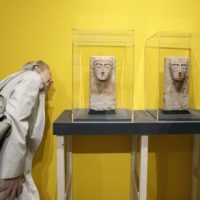 Hot this week: Many recoveries of stolen European art

What Happens If You Break an Artwork?
(14 March 2017; Artsy)
Generally if it is a mistake and you’re a museum-goer, you won’t have to pay.

Why everyone’s talking about forensics in the art market
(15 March 2017; Apollo)
It’s all money and mitigating substantial risk.

Is museum security robust enough to counter crime and terrorism?
(16 March 2017; Apollo)
“Operating cultural heritage sites in the modern era is not without risk”

Why expensive security alarms could actually be putting your valuables at risk
(18 March 2017; Wired)
Charney asserts that reliance on tech “is leaving loopholes in the world of art crime”

New Kingdom mummy mask recovered from France (Egypt, France)
(18 March 2017; Ahram Online)
The piece was stolen from the Elephantine Antiquities Galleries in Aswan in 2013 and recovered from an auction house.

Crosses under grave threat (South Africa)
(13 March 2017; Times Live)
“Almost all of the 22000 cast-metal crosses on the graves of British and Imperial soldiers who died during the Second Anglo-Boer War (1899-1902) have been stolen in the past 20 years.”

Bolivia ratifies the UNESCO 2001 Convention on the Protection of the Underwater Cultural Heritage (Bolivia)
(1 March 2017; UNESCO)
They may be landlocked, doesn’t mean they don’t care about underwater heritage protection

$8k in artwork stolen from North Valley home (USA)
(13 March 2017; Albuquerque Journal)
Some of the paintings were by the robbery victim herself.

$6,000 worth of paintings stolen from Saugerties art studio (USA)
(13 March 2017; Daily Freeman)
“The artist, Kelli Bickman, said three of her paintings, along with one by T.S. Young, a deceased artist, were stolen, and other works were vandalized.”

Woman suspected of stealing painting, police say (USA)
(13 March 2017; Channel 3000)
The suspect is in jail on an unrelated charge and the painting has not been recovered.

WWII vet hopes Japanese flag can be given to owner’s family (USA, Japan)
(13 March 2017; The Daily Astorian)
A desire to return spoils taken off the body of a Japanese soldier.

For Holocaust victims, a path to reclaim stolen assets and stories of their loved ones (USA)
(15 March 2017; Miami Herald)
Research at the Holocaust Museum is helping families find justice.

Priceless Van Goghs or just plain art? (USA)
(16 March 2017; The Daily Mail)
Unauthenticated works that were once in the possession of Jelle de Boer, a controversial figure in the Van Gogh world.

The Forged ‘Ancient’ Statues That Fooled the Met’s Art Experts for Decades (USA)
(16 March 2017; Atlas Obscura)
Looking at the photos of these today is almost painful.

Bronze arrowhead stolen from Ditto Landing sculpture (USA)
(17 March 2017; WAFF)
The large piece was bronze so this seems likely to be a theft for scrap

Tribal group says elimination of Bears Ears would be tragic (USA)
(18 March 2017; The Daily Progress)
It is not only a sacred space, but it is home to at-risk heritage sites

Police Recover 67 Works Stolen in $2.6 Million Vienna Art Heist (Austria)
(15 March 2017; ArtNet News)
Four works stolen from the villa in Lainz are still missing and no arrests have yet been made.

16 Years Later, Stash of Stolen Paintings Found Near Crime Scene (Denmark)
(15 March 2017; ArtNet News)
The pieces by Carl Vilhelm Holsøe were found an hour from the site of theft after someone put one up for auction.

Centre Pompidou broke even on Koons retrospective, Paris court decision reveals (France)
(17 March 2017; The Art Newspaper)
This revealed during a plagiarism lawsuit against Koons and the museum.

German Art Collectors Face a Painful Past: Do I Own Nazi Loot? (Germany)
(14 March 2017; The New York Times)
“As one generation of Germans has died and given its art to the next, a number of people with prominent collections and unsettled consciences have stepped forward to investigate what they own.”

Greece offers ancient archaeological wonders in exchange for Elgin Marbles (Greece, UK)
(14 March 2017; The Independent)
Loan of top quality antiquities for the marbles return? Sounds good to me, but alas.

Greece denies report on Parthenon Marbles (Greece, UK)
(14 March 2017; eKathimerini)
Greece denies a report the UK paper The Independent that they’re calling for the return of the sculpture as a gesture against anti-democratic forces that seek “the dissolution of Europe.”

Stolen Etruscan Vessel to Be Returned to Italy (Italy, USA)
(16 March 2017; The New York Times)
Another solid identification of a looted vessel from Christos Tsirogiannis

Why the fuss over de Valette’s dagger? (Malta, France)
(18 March 2017; Times of Malta)
“The sword and dagger were never Malta’s property, but rather the personal possession of Grand Master de Valette.”

Shadow of Old Masters’ Forgeries Hangs Over an Art Fair (Netherlands)
(15 March 2017; The New York Times)
Are dealers and buyers at Tefaf worried? “There’s a very strict vetting regulation about letting dealers into the fair in the first place”

Veterans appeal for help a er historic stones vanish from old Ox and Bucks barracks in Cowley (UK)
(11 March 2017; The Oxford Times)
“Veterens have appealed for help a er two historic stone lintels vanished from the old Cowley Barracks a er they were demolished for 674 student rooms.”

Comment: Scholarly research is flourishing but curators’ ability to judge an object’s quality is not (UK)
(13 March 2017; The Art Newspaper)
A point to discuss, but the author only offers a 15-year-old case as proof of problem.

Primary school ‘devastated’ after historic lanterns stolen (UK)
(18 March 2017; Express & Star)
The copper art deco lanterns were prised off with a crowbar and drill according to CCTV

Man charged over attack on Gainsborough painting at National Gallery (UK)
(19 March 2017; The Guardian)
The man scratched “Mr and Mrs William Hallett” aka “The Morning Walk” with a screwdriver.

Buyer Beware: US Market for Ancient Asian Art Still the Wild, Wild East (Cambodia)
(14 March 2017; The Diplomat)
“Cultural treasures stolen from conflict zones continue to pop up for sale in the United States and elsewhere.”

No guns for guards: Central Museum is an easy prey (India)
(10 March 2017; The Times of India)
The Central Museum Nagpur is lacking in modern security devices.

Four ancient Panchaloha idols were reported stolen from a Ramalayam temple in Choutuppa (India)
(19 March 2017; The Times of India)
“This is the second such case to be reported within the Rachakonda commissionerate limits in the last three months”

Pakistani faces 20-year imprisonment in US (Pakistan, USA)
(13 March 2017; Dawn)
Ijaz Khan will be sentenced in may for trafficking Pakistani antiquities to the United States

Stolen Buddhist statue to return to Buyeo temple after 30 years (South Korea)
(13 March 2017; Yonhap News Agency)
The piece was found in the Songam Art Museum which identified it as stolen from Muryang Temple.

Law of Return (Israel)
(17 March 2017; Art & Antiques)
“Nazi-looted art brought to Israel after World War II now reposes in that country’s museums and is at the center of a debate over restitution.”

Christie’s Dubai Yanks Iraqi Painting From Sale Over Smuggling Allegations (UAE, Iraq)
(17 March 2017; ArtNet News)
The 1968 piece by Faeq Hassan may have been smuggled out of Iraq and Iraq says it is property of the state and was once displayed in the defence ministry.

Disowning Ivanka: The Art World Stares Down the First Daughter (USA)
(7 March 2017; Art News)
As a public participant in the art world, the younger Trump is facing critique from within it.

Rock may find a home at last (USA)
(15 March 2017; The Daily Independent)
Is Indian Head Rock, with its possible petroglyphs, Kentucky property? Seems so.