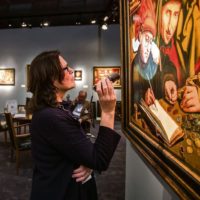 Hot this week: Views of the Mosul museum in ruins

Door and decorative elements of Sultan Al-Kamel Al-Ayyubi shrine stolen (Egypt)
(9 March 2017; Ahram Online)
“The 70-centimetre tall wooden door of the shrine has been stolen as well as a number of tiny wooden decorative elements.”

Officials deny any damage to newly-discovered king Ramses II statue during excavation (Egypt)
(10 March 2017; Egypt Independent)
Yes they used heavy machinery to lift the head, but it was necessary and done with care.

Tunisian authorities foil smuggling of 15th-century Torah scroll (Tunisia)
(11 March 2017; Ynet News)
The 15th century Torah was seized thanks to a tip that it was about to be smuggled to a European country.

Three iron crosses honoring Confederate veterans have been stolen from historic Sheldon church near Beaufort (USA)
(6 March 2017; The Post and Courier)
It was suggested that the thefts were either ‘protest vandalism’ or were taken as ‘black market collector’s items’.

Art adviser ordered to pay $1m she made in private sale of Basquiat painting (USA)
(8 March 2017; The Art Newspaper)
The dealer told the seller that she was selling it for $5.5m. She sold it for $6.5m and kept the difference.

The American Government Is Searching For Its Own Lost Art (USA)
(8 March 2017; Atlas Obscura)
Some of the General Service Administration’s art may have been stolen or illegally sold, others might just be in storage somewhere.

How Big Of A Problem Is Art Theft In The US? (USA)
(10 March 2017; KJZZ)
A radio interview with the FBI’s Bonnie Magness-Gardiner

$30,000 worth of artwork stolen (USA)
(11 March 2017; KOAT)
The paintings by Hitomi Johnson were taken from the Rio Grande Arts and Crafts Festival.

Jeff Koons LLC and the Centre Pompidou are both found liable for copyright infringement in Paris court case (France)
(10 March 2017; The Art Newspaper)
“The High Court of Paris ruled that the 1988 sculpture Naked by Jeff Koons…plaigiarised Enfants, a 1975 photograph by the French photographer Jean-François Bauret”

A Shelter for Art Caught in the Crossfire (France, Syria)
(11 March 2017; The New York Times)
Sounds good on paper but deeply problematic.

Dr. Oetker Is Showing the World What to Do with Nazi-Looted Art (Germany)
(8 March 2017; Artsy)
“The collection is engaging in a systematic campaign to determine which of the pieces it holds were looted or expropriated by the Nazi regime”

Four Tefaf art dealers in disrepute due to potential forgeries (Netherlands)
(8 March 2017; NRC)
Criticism of the fair’s failure to take action against possible forgeries and their floggers.

Swiss Authorities Seize Artworks From Billionaire Urs Schwarzenbach (Switzerland)
(8 March 2017; ArtNet News)
Taken from the walls of his hotel for the second time in 6 months over back taxes.

Was ancient church at Santon Downham, near Thetford, targeted by nighthawks? (UK)
(6 March 2017; Eastern Daily Press)
Metal detectorists were seen leaving the woods near the site.

Mysterious return from the Caribbean of stolen rare 200 year-old Padstow Bank note (UK, Saint Lucia)
(6 March 2017; Cornwall Live)
It had been stolen from the Padstow Museum 20 years ago and was sent back home seemingly from Saint Lucia

Policeman who stole ancient gold coins he found with metal detector is jailed (UK)
(8 March 2017; Manchester Evening News)
He both failed to tell the coroner that he had found treasure and broke his agreement with the landowner to split the proceeds. Jailed for 16 months!

New £50,000 reward appeal for return of Scotland’s first ever coins – as rest of collection is gifted to nation (UK)
(10 March 2017; The Herald)
The coins in question were stolen from Lord and Lady Stewartby ten years ago.

No takers for large collection of works belonging to art forger (New Zealand)
(7 March 2017; The Northern Advocate)
A man is trying to sell works by an infamous faker of works by Charles Frederick Goldie.

Chinese grave robbers poison themselves inside ancient tomb (China)
(10 March 2017; ECNS)
Four out of ten robbers died from inhaling air from their oil-fed generator within the tomb they were robbing.

Illegal stone mining a major danger to five ASI monuments (India)
(7 March 2017; The Times of India)
“Jain and Shiva temples of 9 and 10 AD at Badoh and Pathari near Vidisha are bearing the brunt of illegal stones quarrying.”

US returns 8 ancient idols in big retrieval (India, USA)
(9 March 2017; The Times of India)
“After it emerged that smugglers had stolen the artefacts from India, private art collectors handed them over to the consulate general of India in New York.”

Centaurs, archers and modern vandals (India)
(10 March 2017; The Hindu)
Protecting the cave paintings at Porivarai? No concrete plans yet.

Police Recover Kailash Satyarthi’s Stolen Nobel Citation From Jungle (India)
(11 March 2017; Outlook)
The thieves had dumped it thinking that it was worthless.

Theft of artifacts rampant due to legal loopholes Police crack down on thieves, but critics say laws need to change (South Korea)
(6 March 2017; Korea JoongAng Daily)
“What’s also startling is how oftentimes private museums are found to have been involved in treasure theft.”

Photos reveal ISIL’s destruction to antiquities museum in Mosul (Iraq)
(8 March 2017; The National)
Tragic. Be sceptical of the simplicity of the looting for the black market angle though.

Scars of looting, destruction all that remain at Mosul museum (Iraq)
(11 March 2017; Reuters)
“Dozens of Assyrian, Akkadian, Babylonian, Persian and Roman artifacts that the ransacked museum held have all been stolen or damaged.”

Antiquities theft from second temple period prevented in central Israel (Israel, Palestine)
(6 March 2017; Jerusalem Post)
The men were arrested at the site of Beit Shana and they had a metal detector.

Antiquities agency chief says Jordan Codices fake (Jordan)
(9 March 2017; The Jordan Times)
The DoA says that the lead codices it seized seven years ago have not proved authentic and have criticised a British scientists findings about the matter.

Ancient book stolen in Syria seized in Turkey (Turkey)
(8 March 2017; Hurriyet Daily News)
Although it is being reported as being from a Syrian museum, we should question the story that comes with it.

A Painting and News Report Land a Turkish Artist in Prison (Turkey)
(9 March 2017; Hyperallergic)
2 years 10 months for a painting that shows the destruction of the city of Nusaybin by government forces.

As Dubai’s Skyline Adds a Trophy, the Architect Calls It Stolen (UAE)
(8 March 2017; The New York Times)
Fernando Donis has filed suit saying he was not compensated for his design of “The Dubai Frame”

Pharaonic relics submerged with Titanic must be recovered: Egyptologist (Egypt)
(12 March 2017; Egypt Independent)
Not mad at all… Hoping this is a joke that fell flat on the reporter.

Poachers kill rhino and saw off its horn at zoo near Paris (France)
(8 March 2017; The Local)
It was probably removed with a chainsaw

Man (52) who damaged Monet painting admits supermarket theft (Ireland)
(11 March 2017; Irish Independent)
The pan who punched the Monet has now admitted to stealing €200 worth of toothbrushes

Police: Man Smashes Bottle Over Security Guard’s Head At Metropolitan Museum of Art (USA)
(6 March 2017; CBS)
The guard had told the man not to touch the artwork.

Stolen Stradivarius violin will sing again (USA)
(10 March 2017; Deccan Chronicle)
“After a meticulous restoration that took more than a year, a Stradivarius violin that was stolen from violinist Roman Totenberg and missing for decades is about to return to the stage.”