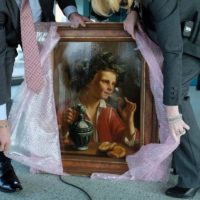 The Art Lost Register Resolved Eight Stolen Artworks Cases in January
(6 February 2017; ArtNet News)
“Three of the eight artworks that were recovered were stolen during the Second World War.”

Ethics code and transparency are key in protecting image of art market
(8 February 2017; Antiques Trade Gazette)
Report on the Risk Management in the Art and Antiquities Markets seminar in London.

Encroachments removed from Dahshour necropolis site: Ministry (Egypt)
(10 February 2017; Ahram Online)
“Bulldozers from a neighbouring quarry” had entered the site. The encroachers were apprehended by police.

Germany Arrests Alleged Mastermind Behind Bardo Museum Terror Attack (Tunisia, Germany)
(9 February 2017; ArtNet News)
A 36-year-old Tunisian national was arrested, he is also a accused of being an recruiter and smuggler for IS.

Gone, sometimes forgotten: State law protects even tiny cemeteries, but enforcement can be tough (USA)
(7 February 2017; Omaha World-Herald)
“The historical society doesn’t have the resources to regularly check up on all the cemeteries…it doesn’t have the legal authority to take action.”

Show of shipwrecked treasures raises scientists’ ire (USA, Indonesia)
(7 February 2017; Nature)
Displaying the past or condoning the looting of the Belitung Wreck?

Newbury Street gallery robbed, and suspected thief caught within moments (USA)
(6 February 2017; The Boston Globe)
The thief apparently had no idea what items were valuable in the gallery, or his goals are simply unknown.

The Eiffel Tower Is Getting a Bulletproof Glass Wall (France)
(9 February 2017; Condé Nast Traveler)
…which will no doubt get very dirty very quickly. “The terror threat remains high in Paris and the most vulnerable sites, led by the Eiffel Tower, must be the object of special security measures.”

Urartu-era antiquities found in a truck in Hungary (Hungary, Turkey, Armenia, Lithuania)
(9 February 2017; PanArmenian)
” The 115 objects, also including 14 Roman gold coins and some high-quality forgeries, were found during a routine search on September 29 of a truck going to Lithuania.”

Medieval, modern looters destroy most mummies in Russia’s Yamal — scientist (Russia)
(10 February 2017; TASS)
“It is next to impossible to find well preserved remains in the burials of the XII-XIII centuries, since practically all burials had been robbed, and the looters had taken away all the metal they found – in order to smelt it and sell on black market”

Cathedral-goers get up-close look at snatched medieval crucifix (UK)
(6 February 2017; Premier)
The piece was found ‘in the churchyard of Coombes Parish Church near Shoreham-by-Sea in 1877’, stolen in 2012, and recovered 4 years later.

Sotheby’s heads to court in dispute over ‘fake’ Old Master (UK)
(7 February 2017; Financial Times)
Weiss, the dealer in the case, denies the disputed Hals is anything but a Hals.

A Scarred Battlefield: forgery at work? (UK)
(7 February 2017; The Telegraph)
What’s going on with this Paul Nash work?

Metal detectorists urged to ‘brush up on skills’ to avoid damaging treasures (UK)
(7 February 2017; The Herald)
A report encourages closer collaboration between metal detectorists in Scotland and heritage professionals.

Church secured against thieves – at cost of £311,000 (UK)
(10 February 2017; Darlington & Stockton Times)
“Extensive damage was caused to St Gregory’s Church in Bedale, which dates back over 700 years, when lead thieves struck on one of the wettest nights of 2016.”

Man stole bronze figurine worth £400 but was “so drunk” he left it on bus (UK)
(11 February 2017; Daily Echo)
“The only thing he remembers from that day was being on the bus when he thinks he may have had the item with him.”

Pensioner jailed for spate of art thefts (UK)
(11 February 2017; The Times)
“His haul included a portrait of Pope Innocent X valued at between £3,000 and £5,000, which he stole during a pre-sale viewing at an auction house in Kensington”

Vandals target display of multifaith artworks at Gloucester Cathedral (UK)
(12 February 2017; The Guardian)
“The art show, Faith, put together by portrait artist Russell Haines, was at the centre of an international row last month when Christian groups heavily criticised the use of Islamic images and the reciting of a Muslim prayer inside the historic cathedral buildings.”

Stopping the fake indigenous art flood when does cultural appropriation become theft? (Australia)
(7 February 2017; Lexology)
Australia’s Indigenous art community thinks that the proliferation of “Made in China” Aboriginal-style art is a problem.

Indonesia and Australia battle to save WWII shipwreck HMAS Perth from salvagers (Australia, Indonesia)
(10 February 2017; Western Advocate)
“Efforts to protect the wreck comes as three Japanese ships that sunk off the coast of Borneo during the 1944 Pacific War by US forces have reportedly been torn apart for scrap.”

Over 28 antiquities retrieved from abroad till date: Govt (India)
(6 February 2017; The Indian Express)
“India has retrieved as many as 28 antiquities from various countries till date even as there is no proposal for retrieval of artefacts from British Museum, London”

Indian cops arrest US businessman over idol smuggling (India)
(8 February 2017; The Daily Mail)
“They detained Vijay Nanda, a US citizen of Indian origin, after finding antiques including terracotta figurines more than 2,000 years old at his premises in Mumbai”

Nobel Prize stolen from social activist Kailash Satyarthi’s house (India)
(7 February 2017; Mashable)
The Nobel laureate’s citation and replica of his medal was stolen, presumably by thieves who thought it was real.

Kailash Satyarthi’s stolen Nobel replica recovered, 3 arrested (India)
(12 February 2017; The Times of India)
“The original medal has been preserved and is now on display at the Rashtrapati Bhavan Museum”.

‘Salvaging okayed after getting feedback from agencies’ (Malaysia)
(10 February 2017; New Straits Times)
“Due to the condition of the ships, which had deteriorated, conventional approach to archaeological research was deemed too dangerous, hence the salvage approach was carried out to gain access to the interior of the ship.”

Debate over statue highlights complexities of ownership (South Korea, Japan)
(6 February 2017; Korea JoongAng Daily)
It is impossible to say how this Korean sacred statue got to Japan…where it was then stolen by Koreans who brought it back.

New document by Chun Kyung-ja says ‘Beautiful Woman’ is fake (South Korea)
(7 February 2017; Yonhap News Agency)
The “family and lawyers of renowned painter Chun Kyung-ja unveiled the notarized paper written by the painter herself, on which the artist reiterated her previous claim that she didn’t paint it”

Iran displays ancient Persian artifacts returned from the US (Iran, USA)
(8 February 2017; Phys.org)
Vestige of a positive diplomatic pathway that we should all fear is probably now ruined.

Najaf Police confiscates 35 artifacts hidden inside vehicle (Iraq)
(5 February 2017; Iraqi News)
The items are being inspected for authenticity and the vehicle’s occupants “will be interrogated”

Why We Need to Fight to Save Mosul’s Cultural Heritage (Iraq)
(9 February 2017; Smithsonian)
Katharyn Hanson and Richard Kurin on their preservation work with and in Iraq.

Antiquities robber caught red-handed in a Byzantine site (Israel, Palestine)
(7 February 2017; Ynet News)
“A Palestinian from the Gush Etzion region was caught Monda morning digging in the Byzantine site of Umm Al-Amad in the Judean desert.”

New Dead Sea Scrolls cave filled with ancient artefacts discovered for first time in 60 years (Israel)
(9 February 2017; The Independent)
“Looting in the 1950s thought to be why ancient parchments are missing”

Police seize 1 billion liras worth of Hellenistic jewelry in western Turkey (Turkey)
(7 February 2017; Daily Sabah)
The supervisor of a flat in Muğla province tipped the police off and the suspect was arrested.

5 detained in Turkey for attempting to sell painting claimed to be Picasso’s work (Turkey)
(9 February 2017; Daily Sabah)
Poor condition and not looking much like a real Picasso, but some crime was committed here.

We can preserve elephants AND conserve art (General)
(7 February 2017; Apollo)
Assertion that there is a middle ground for historic ivory objects in upcoming total ivory bans.

National Gallery’s £30m Pontormo bid rejected owing to sterling slump (UK)
(6 February 2017; The Guardian)
We will potentially lose this piece due to Brexit.