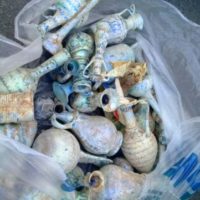 It’s time the art market got tough on fakes
(2 February 2017; The Art Newspaper)
“But even simple provenance research may be impossible when a dealer or an agent mediates on behalf of an anonymous seller.”

Egypt retrieves 4,000-year-old figurine from London (Egypt)
(29 January 2017; Egypt Independent)
It was stolen from Aswan in 2013 where it had been excavated by Spanish archaeologists and was detected by a curator at the British Museum.

Egypt retrieves 2 artifacts from London (Egypt)
(1 February 2017; Egypt Independent)
The pieces were stolen following the Jan 25 revolution and were at a London auction house.

Police seize 801 artifacts, preventing illegal sale in Sharqiya (Egypt)
(2 February 2017; Egypt Independent)
A student and his mother were keeping the pieces for sale to an unauthorised dealer.

Nigeria: Govt Vows to Deal With Collaborators of Destroyed 190-Year Monument (Nigeria)
(29 January 2017; All Africa)
“The Federal Government says it will deal decisively with collaborators in the demolition of a 190-year old “Olaiya House” declared a national monument”

Thieves will battle to resell unique artworks heisted from Joburg gallery (South Africa)
(1 February 2017; Times Live)
The thieves will soon find that it is easier to steal a painting than it is to fence it.

Royal Canadian Mint employee who hid stolen gold in his bum gets 30 months in prison (Canada)
(2 February 2017; The Hamilton Spectator)
“Lawrence set off the metal detector more often than any other mint employee without metal implants, Doody said in his ruling. But follow-up searches with hand wands never discovered the smuggled gold hidden in his body cavity.”

Visa Ban Leaves Artists in Limbo, and Institutions Perplexed (USA)
(29 January 2017; The New York Times)
“This is such a mess” is an understatement.

Sarasota art theft suspects caught (USA)
(30 January 2017; 10 News)
The artworks have not been recovered and are thought to have been dumped.

No further jail time for Glafira Rosales for her role in $80m Knoedler forgery scandal (USA)
(31 January 2017; The Art Newspaper)
She spent a total of 82 days in prison and isn’t going back in. White collar crime, eh?

Three charged in theft by swindle art scheme (USA)
(2 February 2017; The Journal)
They convinced people they hadn’t met to pre-pay for art they had never seen. You can imagine how that went.

Jury indicts man accused of stealing memorabilia from Canfield museum (USA)
(2 February 2017; WKBN)
The items stolen from the veteran’s museum were then sold on Craigslist.

Republicans back off bill to sell 3.3m acres of public land after outcry (USA)
(2 February 2017; The Guardian)
More in the continuing pained debate about the fate of sacred and public land in the US>

‘Playful pup’ sculpture returns to Mercer Island park (USA)
(3 February 2017; Mercer Island Reporter)
“The pup was cut off of his base plate and taken in mid-October, but recovered shortly after”

Ex-owner of Hitler house sues Austria (Austria)
(1 February 2017; Art Daily)
“The state seized the dilapidated building in the northern town of Braunau in December after MPs approved an expropriation law specifically aimed at the controversial property.”

Belarus plans to return Shishkin’s painting to Russia (Belarus, Russia)
(30 January 2017; Belarus News)
The painting was seized in a drug and had been stolen from the Vyazniki History and Art Museum in 2013

Où sont les toiles de l’homme-araignée ? (Where are the Spider Man paintings?; France)
(26 January 2017; Le Parisien)
Three are on trial for the 2010 theft from the Museum of Modern art, but the paintings have not been recovered.

‘Spider-Man’ burglar on trial over €100m Paris art theft (France)
(30 January 2017; The Guardian)
Vjeran Tomic is facing 14 charges and up to 20 years in prison if convicted of the robbery of the Modern Art Museum.

Defendant Claims He Threw Out Modern and Impressionist Masterpieces After `Spider-Man’ Heist (France)
(31 January 2017; ArtNet News)
One of the three defendants in this case said that he threw the paintings in the trash. His co-defendants deny this.

For Paris ‘Spiderman,’ Stealing 5 Museum Masterpieces Was No Sweat (France)
(3 February 2017; The New York Times)
“It’s one of my easiest and biggest heists,” said Tomic, speaking about the Museum of Modern Art theft.

European countries are working together to tackle cultural property crime (General)
(2 February 2017; Apollo)
“The fight against both the trade in stolen art and antiquities requires strong cooperation between law enforcement agencies, customs officials, experts, and the art trade itself.”

Angry Pompeii workers ‘tear down part of ancient Roman house in clash with management’ (Italy)
(1 February 2017; Mirror)
A confusing situation. There is a labour dispute. Some part of the site collapsed. The two may not be connected.

Call for Italy’s quake-stricken works to return home for treatment (Italy)
(3 February 2017; The Art Newspaper)
Representatives from Marche are worried that objects taken for conservation and protection post quake will not be returned to the region.

Missing Paintings Stolen by Mobsters to Return to Van Gogh Museum (Netherlands, Italy)
(2 February 2017; ArtNet News)
They will be on display in Naples at the National Museum of Capodimonte for three weeks before they go home.

Belgians face decade in prison for Auschwitz theft (Poland, Belgium)
(31 January 2017; The Times of Israel)
This is for stealing part of the concentration camp fence.

Hermitage storage centre searched by FSB agents (Russia)
(4 February 2017; The Art Newspaper)
“The FSB search coincided with continuing controversy over a government decision to hand St Isaac’s Cathedral, a St Petersburg landmark that was turned into a museum in the Soviet era, over to the Russian Orthodox Church.”

Two charged in theft from sunken World War I warship (UK)
(30 January 2017; UPI)
The theft occurred at the wreck of the HMS Hermes, a British warship sunk in October 1914.

My grandfather left me a £2million Van Gogh – and we’ve spent £4k trying to prove it: Couple claim they own a piece from early in the artist’s career (UK, Netherlands)
(3 February 2017; The Daily Mail)
Instead the work appears to be by Willemina Vincent. They are sure treating it poorly in the photo.

New Zealand’s surprising history of art crime: ‘I continue to be flabbergasted’ (New Zealand)
(2 February 2017; The Guardian)
About Penelope Jackson’s book on the topic.

Chhattisgarh: Ancient Ganesha idol damaged by suspected Maoists successfully restored (India)
(2 February 2017; Business Standard)
“The remains of this idol were collected by the Armed Forces,” after being found by search parties following the report of its disappearance.

‘Art thief’ hearing to finish quickly (Japan, Thailand)
(31 January 2017; Bangkok Post)
The Thai Deputy Chief of the Department of Intellectual Property who allegedly stole paintings from a Japanese hotel will see a speedy probe into his actions.

Court approves stay of execution on return order for stolen Buddhist statue (South Korea, Japan)
(1 February 2017; Yonhap News Agency)
The stolen (maybe) and counter stolen statue will not be handed over to a local temple until the verdict to do so is confirmed.

Six Treasure Hunters Inside an Ancient Canal in Eppawala Arrested (Sri Lanka)
(31 January 2017; Hiru News)
Water was removed from a cave in this attempt to loot.

Official laments smuggling of invaluable Shia manuscripts (Iran)
(12 January 2017; Mehr News Agency)
“Shia manuscripts dating back to early and middle history of Islam had been neglected, destroyed, or smuggled outside the country”