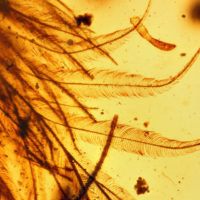 [UPDATE: (June 2020) I disagree with myself here. A real look at Myanmar’s laws shows that a loophole is being knowingly exploited and that fossil amber exports are still very likely to be fully illegal in Myanmar. See my post here: Illicit dino feathers and exploiting legal loopholes to study fossils in Myanmar amber and read the rest of this post knowing that I no longer back this stance]

A few months back I, and probably everyone with even a sliver of fossil love in their heart, was delighted to hear that a delicate, feathery, fluffy dinosaur tail was found preserved in Burmese amber. I was visiting Victoria University of Wellington at the time and I spent most of the day writing a paper and thinking about fluffy little fuzz dinos getting stuck in some sap and preserving. I like it.

By late afternoon I went dark. How did this fossil leave Myanmar? Was it legal? Several articles (this, this, etc.) said the lead palaeontologist on the project, Dr Lida Xing, bought the specimens (including the tail) “at a well-known amber market in Myitkyina, the capital of Kachin state”, Myanmar. Then the info stops. Bought them…but how did they export them? Fossil export doesn’t sound like the kind of thing that is legal in Myanmar. 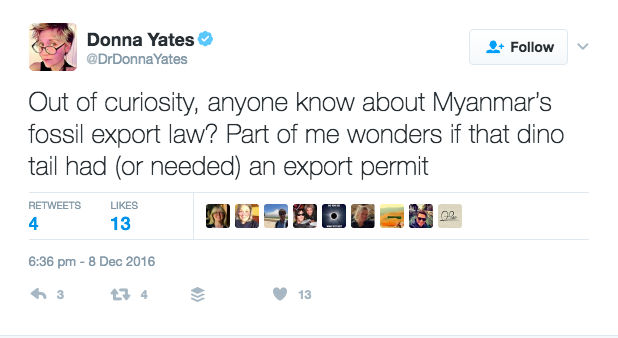 You see, I have reasons to be suspicious

In many countries, the excavation and export of fossils is tightly regulated, often by the same legislation that protects antiquities. In some cases, archaeological objects and paleontological objects exist side by side on a line of the law. Heck in the 1970 UNESCO Convention on the Means of Prohibiting and Preventing the Illicit Import, Export and Transfer of Ownership of Cultural Property, which we think of as concerning antiquities, the start of Article 1 reads:

For the purposes of this Convention, the term ‘cultural property’ means property which, on religious or secular grounds, is specifically designated by each State as being of importance for archaeology, prehistory, history, literature, art or science and which belongs to the following categories:

(a) Rare collections and specimens of fauna, flora, minerals and anatomy, and objects of palaeontological interest;

(b) property relating to history, including the history of science and technology and military and social history, to the life of national leaders, thinkers, scientists and artist and to events of national importance;

This is in response to a real problem. Fossil smuggling is a vast, crazy thing (oh, I could give you many links but you can start here) and it’s critically under-studied. I don’t know if I have seen a paper from within criminology or sociology on it. A palaeontology colleague and I gave a basic paper on the topic at a heritage conference once, but that ain’t sociological analysis. Someone qualified: do a PhD on this! I’ll supervise it.

The most interesting thing I found coming out of conversations about this topic with palaeontologists is that the scene has the tone of archaeology 60 years ago. There seems to be a substantial percentage of the paleontological community that is willing to engage with specimens on the market, in private collections, and without provenance. There is a feeling among some professionals that: the export laws are too strict so they should be bent or broken; for-profit fossil digging outfits are a sad byproduct of underfunding for academic excavations and that’s how it goes; context doesn’t really matter much; science beats out whatever other concerns there might be. Not everyone believes all or any of those things, but it means otherwise-respectable folks can and do engage with a dodgy market. With a dodgy market comes all sorts of problems for science. Like fakes.

You heard me right, fake fossils. Read about the “Archaeoraptor” case if you want to see how unprovenanced fossils hurt science. Like in archaeology, if a pro didn’t locate it properly, you don’t know what the heck it is, where it came from, or who messed with it along the way.

But back to the dino tail

With the popular media confirming the dino tail had been bought in Myanmar, but without any information as to how it left Myanmar, I abandoned what I should have been doing and dug around for Burmese fossil law. This was not the easiest of tasks as parts of Myanmar’s customs website were down. I found a few US-based travel sites warning against taking fossils out of Myanmar, but that wasn’t going to cut it.

I did pretty well with Prott and O’Keefe’s Handbook of national regulations concerning the export of cultural property (1988). And although the book is older than many of you readers, it did provide a general sense for how the country approaches fossil regulation.

At the time the book was published, the relevant bits of legislation were the Antiquities Act of 1957, Antiquities Act of 1962, and Order No. 1/86 of 1986. These defined the term “antiquity” to include human and animal fossils. The export of antiquities was prohibited except when a permit had been granted by the president. In other words, there is little chance anyone could legally export fossils, especially extremely important ones.

So how did the tail fossil leave Myanmar? This didn’t look good. 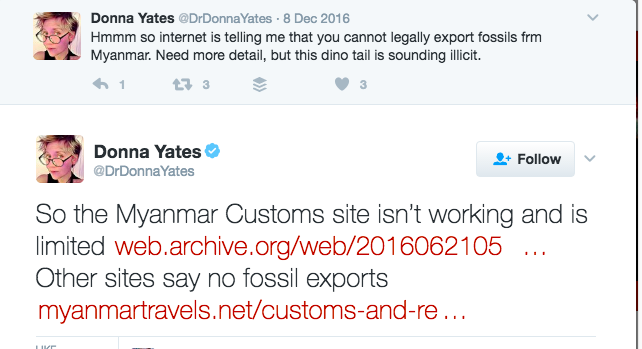 Thank goodness science journalist Rachel Becker was paying attention to my grumble tweets, and thank goodness she did something I neglected to do. As I was poking at the palaeontologists’ employers on Twitter and demanding information, Rachel took the radical step of… actually reading the original paper, which of course had a reasonable, informative, and admirable answer. 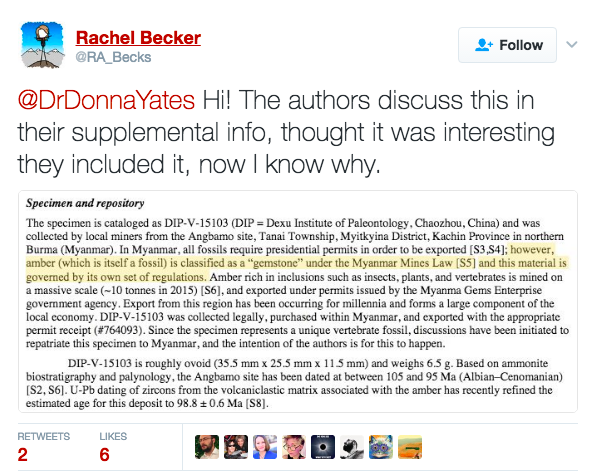 In the supplemental info the authors both explain what provenance information they have about the piece (“collected by local miners from the Angbamo site, Tanai Township, Myitkyina District, Kachin Provence in northern Burma (Myanmar)”), and the legal situation for export. They say yes, fossils require export permits from the president (so, you know, not gunna happen), but under Myanmar Mines Law amber is considered a gemstone and thus falls under a different regulatory instrument. Their amber piece was exported legally under a permit issued by the Myanma Gems Enterprise government agency. They list their permit number (#764093) AND, icing on the cake, due to its importance they intend to repatriate the fossil to Myanmar and have initiated the return themselves.

Whoa. Gosh was I humbled.

I don’t read a lot of palaeontology papers but this seems “above and beyond” the norm. This may be a model for best practices that archaeologists should emulate. With this one paragraph, the authors have shown they have an understanding of what legislation applies to their work and have provided evidence that everything they are working with is legal. How many archaeologists can say that?

Well, okay, they do claim full policy knowledge but it isn’t true. Admit it, archaeologists, with some exceptions you’ve probably never read all of the antiquities legislation in the countries you work in. No…no you haven’t, don’t tell me you have. You haven’t. I hadn’t until I decided to do a PhD on it. Start with the UNESCO World Heritage Laws Database, then move on to Ministerial policy documents, the penal code, etc. Then come back to me.

I would love to see a standard disclaimer attached to all research that engages with potentially-illicit materials. Maybe this would mean we could strong-arm museums into conducting real provenance research on their collections (and sharing the results) and maybe it would lead to better informed practice within archaeology, palaeontology, and the likes. We sure need it.

[image via the Royal Saskatchewan Museum]