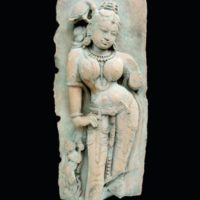 How Art and Law Can Work Together Beyond the Marketplace
(13 January 2017; Hyperallergic)
There is so much crossover (and potential crossover) between art and law.

Five ancient Egyptian artefacts smuggled to US repatriated (Egypt)
(9 January 2017; Ahram Online)
The new MoU between Egypt and the US is cited in this article although they wouldn’t have triggered this return.

Vandals deface U’hage’s newly returned cannon (what the article does not say is if this is politically motivated vandalism or just kids being dumb.; South Africa)
(11 January 2017; Herald Live)
This is the second vandalism attempt

ICE returns cultural artifacts to Peru (Peru, USA)
(12 January 2017; ICE)
A few more details on the items returned but little about the seizure.

Cultural artifacts returned to Peru, all 404 of them (Peru, USA)
(12 January 2017; Living in Peru)
Little info offered about this massive haul.

Philip Johnson Chapel Vandalized in Dallas (USA)
(10 January 2017; Hyperallergic)
The church believes that the vandalism was in response to their pastor refusing to link homosexuality to paedophilia on the radio.

Thieves rip off historic images from Park City construction site (USA)
(10 January 2017; Park Record)
The images were printed on fabric and were taken from the former Kimball Art Center site

North America’s Oldest Mummy Returns to a Native Tribe (USA)
(10 January 2017; Hyperallergic)
The Paiute-Shoshone now have control of the remains of the Spirit Cave mummy.

Stolen art returned to cancer group (USA)
(11 January 2017; The Acorn)
The angel statue was stolen from Cancer Support Community Valley/Ventura/Santa Barbara and this seems like a conscience return.

Davis Charged With Stealing Large Contemporary Painting (USA)
(11 January 2017; Chattanoogan)
The man allegedly stole a painting from a private residence during a break in and tried to sell it to a businessman.

Withers attorney analyzes New York antiquities scandal (USA)
(12 January 2017; Greenwich Time)
“Nancy has been around a long time and had been thought of as a reputable gallery”. Shows how much reputation alone is worth.

Richard Prince Just Showed Artists a Way to Fight Trump. And May Have Cracked Open a New Contemporary Art Code Too. (USA)
(13 January 2017; Vulture)
Prince admits, for the first time, that he isn’t the author of one of ‘his’ Instragram pieces…

Bears Ears and Gold Butte are the latest battlegrounds in a long-running debate about federal land in the West (USA)
(14 January 2017; The Economist)
The article notes that no law clearly prohibits a president from un-monumenting a monument.

Raasch: The politics of art, or the art of politics? It’s in the eye of the beholder (USA)
(11 January 2017; St. Louis Post-Dispach)
More on the Capitol “cops as pigs” student art kerfuffle.

Painting in Capitol depicting police as pigs becomes a political football, with California politicians among the players (USA)
(11 January 2017; The Los Angeles Times)
The now-controversial painting had been hanging in the Capitol for 6 months with no problems.

Serial art forger sentenced to two years’ probation (Finland)
(13 January 2017; YLE)
“Around 20 art experts, vendors and resellers are suspected of participating in the scheme. They have all denied the charges.”

Shock acquittals in Wildenstein art dynasty’s tax fraud trial (France)
(12 January 2017; RFI)
“They had clearly intended to conceal their massive wealth from tax authorities, he said, but shortcomings in French law and in the conduct of the inquiry made it impossible to convict them.”

Europe Wants More Protection Against Antiquities Trafficking (General)
(13 January 2017; The New York Times)
“Friday’s gathering at the Council of Europe in Strasbourg was intended as a step toward an eventual European treaty focusing on criminalizing antiquities trafficking.”

Nazi-loot panel asks Sprengel Museum to return Schmidt-Rottluff work to heirs (Germany)
(10 January 2017; The Art Newspaper)
Marsh Landscape With Red Windmill, a 1922 watercolour by Karl Schmidt-Rottluff, will be returned to the family of Max Rüdenberg

German family firm to return Nazi-looted artwork to Jewish heirs (Germany)
(13 January 2017; The Times of Israel)
The “Hans Thoma painting to be given back to descendants of Albert and Hedwig Ullmann” from the Dr Oetker company.

For Italy’s Art Police, An Ongoing Fight Against Pillage Of Priceless Works (Italy)
(11 January 2016; NPR)
A feature on the Carabinieri’s art crime unit

Norwegian drug lord helped to solve the theft of King Harald’s priceless antiques (Norway)
(11 January 2017; Royal Central)
“It was on 8 June 1991 that an unemployed thief broke into Oscarshall Castle in Oslo and stole national treasures”

A prisión por robar un cáliz y dinero de la lotería de una iglesia de Onda (Prison for theft of a chalice and lottery money from an Onda church; Spain)
(11 January 2017; El Mundo)
A neighbour of the accused tried to sell the items back to the priest of the church.

Man who stole Dambuster hero’s mission book also took hundreds of items from the National Archives to sell in the US (UK)
(13 January 2017; The Telegraph)
“Alex Bateman, a former history teacher, forged a Christmas card and faked a burglary in a bid to steal a valuable logbook from Doris Fraser, 92, the widow of the late Dambuster’s hero Flight Sergeant John Fraser.”

Paparazzi Dog statue stolen from Paddington, artists offering $10,000 worth of art for its return (Australia)
(11 January 2017; The Daily Telegraph)
This is the second one stolen in the past month

‘Indian art awaits high scrutiny in Oz’ (Australia, India)
(11 January 2017; The Times of India)
A discussion with Vinod Daniel, chairman of the board for AusHeritage, Australia’s international cultural heritage network and a board member of the International Council of Museums.

Killing Fields Bones Not Brought In, Expert Says at KR Tribunal (Cambodia)
(11 January 2017; The Cambodia Daily)
Skeletons unearthed at the infamous Choeung Ek killing fields on the outskirts of Phnom Penh were those of victims slain there, and were not moved from elsewhere in the country, an archaeologist told the Khmer Rouge tribunal.

Chinese museum demands return of horse sculptures from Pennsylvania (China, USA)
(13 January 2017; ECNS)
As the pieces have been in the Penn museum for nearly 100 years, I don’t see this request going much of anywhere.

Emerald lingam stolen from TN temple for second time (India)
(9 January 2017; The Times of India)
It was stolen 10 years ago but recovered police. Now it is gone again.

Bismillah Khan’s stolen shehnais recovered; grandson, 2 others arrested (India)
(10 January 2017; Hindustan Times)
Jewellers that the grandson had brought them too had already melted down the shehnais’ silver ornaments.

Hyderabad: Thieves looting antiques without any fear of law (India)
(11 January 2017; Deccan Chronicle)
“The problem is down to inadequate security. Thefts at museums and other protected places are few.”

Stolen Panchaloha idols seized from trio on bike (India)
(12 January 2017; The Times of India)
The pieces were stolen from a temple in Dindi in the Nalgonda district two months ago.

2 arrested for breaking into art gallery (India)
(12 January 2017; The Times of India)
They were breaking in to the National Gallery of Modern Art in New Delhi and were trying to steal ‘artefacts’

Raza’s work wasn’t stolen, he had taken it back (India)
(13 January 2017; The Times of India)
Sayed Haider Raza took the missing painting to write a tribute to his late principal on the back.

Two antique brass pots stolen from temple (Myanmar)
(9 January 2017; The Star)
The Klang Qing Si Temple in Pandamaran has been hit three times in the past month.

Police recover most of stolen idols but culprits still at large (Nepal)
(9 January 2017; My Republica)
“Obvious sadness was noticed in their faces after police announced that they are yet to recover seven idols, including the idol of Dattartreya”

SHC orders removal of Mohenjo Daro encroachers (Pakistan)
(12 January 2017; Daily Times)
They also noted that items have been stolen from the nearby museum.

Japan Recalls South Korean Ambassador in Protest of ‘Comfort Women’ Memorial (South Korea, Japan)
(12 January 2017; ArtNet News)
“In protest of a memorial to the thousands of “comfort women” forced into sexual slavery by the Japanese military during World War II, the Japanese recalled its ambassador and one of its consuls from South Korea”

How the estate of Thailand’s missing ‘Silk King’ was among the winners of Reagan’s 1986 Tax Reform Act (Thailand)
(9 January 2017; The Art Newspaper)
“Buried in the 800-plus pages of the 1986 Tax Reform Act, a private collector’s estate is singled out for special relief from a hefty tax bill”

‘Hollyweed’ Sign Prankster Arrested by Los Angeles Police (USA)
(10 January 2016; ArtNet News)
“He was inspired by Danny Finegood, who changed the sign in 1976 to read the same words as part of an apparent school art project”