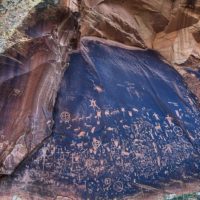 Donna Yates is back compiling again. Thanks again to Ryan Casey for all her hard work on Culture Crime News these past two months.

The Year of the Fake: The 8 Biggest Forgery Controversies of 2016
(27 December 2016; ArtNet News)
This year in news about art fakes.

The 10 Biggest International Art Scandals of 2016
(30 December 2016; ArtNet News)
It’s been quite the absurd year for art scandal.

Egypt retrieves 340 smuggled artifacts from Jordan (Egypt, Jordan)
(26 December 2016; Egypt Independent)
The pieces were seized via customs at Aqaba port in a shipment of coal coming from Nuweiba port.

Can street art be preserved? Undoing of a Montreal mural raises questions (Canada)
(28 December 2016; CBC)
When street art gets grafittied.

Colombia returns ancient relics (Peru, Colombia)
(27 December 2016; Living in Peru)
Very little information offered as to the circumstances of the seizure of these items.

Case Against Robert Motherwell’s Foundation Is Dismissed (USA)
(20 December 2016; The New York Times)
The former director, Joan Banach, had filed a wrongful dismissal lawsuit. The foundation says that she stole some of his work and sold it.

Provo City School District’s most expensive piece of art is missing (USA)
(29 December 2016; Daily Herald)
Most were probably given as gifts, not specifically stolen.

Suit alleging Notre Dame has pilfered art collection is transferred to Indiana (USA)
(30 December 2016; Pittsburgh Post-Gazette)
Jay Leff’s son claims that the University of Notre Dame has been displaying Olmec antiquities stolen from his father. I, of course, think those Olmec figurines were stolen from Mexico…

Obama declares Bears Ears National Monument in southern Utah (USA)
(28 December 2016; The Salt Lake Tribune)
This is wonderful. A bit of bright news in the darkness. Hopefully this will allow some real looting protection at these sites.

Director of Belgian Royal Museums Files Criminal Complaint Against Secretary of State (Belgium)
(23 December 2016; ArtNet News)
Selurs is accused of waging an unfounded campaign against the Modern Museum and Draquet which he claims were a factor in his wife’s suicide.

Modern fight over ancient library (Germany)
(27 December 2016; The Journal Gazette)
Will this unique collection of manuscripts from a now-shut Bridgettine monastery be broken up, divided, or sold?

Three suspects in theft of Levitan paintings from museum arrested (Russia)
(28 December 2016; RAPSI)
The paintings, which were stolen in 2014, have been recovered.

Jean Paul Barbier-Mueller, ‘gentleman collector’ of ethnographic art, has died aged 86 (Switzerland)
(26 December 2016; The Art Newspaper)
Barbier-Mueller was no stranger to criticism about the sources of both his father-in-law’s and his own collections.

Country’s ‘one of a kind’ cannon is stolen from garden (UK)
(2 January 2016; Daily Echo)
“Lyle cannons threw lines out into the water – rather than shots – either from the shore or from naval vessels projecting the line some 250 yards.”

Another artist is claiming that a big fashion brand has ripped off her designs (UK)
(28 December 2016; Metro)
This time it is patch copying from Topshop.

Kirklees council considers selling Francis Bacon painting (UK)
(28 December 2016; The Guardian)
Another painful chapter in the “defunding leads to deaccessioning” saga and we all lose public art to the private market.

Owner of Zoffany painting destroyed in fire could receive £4m from UK government (UK)
(29 December 2016; The Art Newspaper)
The piece was destroyed in the 2015 Clandon Park country mansion fire alongside National Trust pieces which were only insured against damage, not total loss.

Indore: Theft at a temple at Subhash Chowk (India)
(26 December 2016; The Times of India)
The theft of the goddess’ crown happened after the priest had left the temple.

Aurangzeb-era Quran stolen from Kashmir in 2003 may be with New Delhi museum, hints CBI (India)
(30 December 2016; Kashmir Reader)
A book wish “similar features” to the stolen Quran has been confiscated by the Crime Branch of New Delhi.

Cash, silver stolen from Ludhiana temple (India)
(31 December 2016; The Times of India)
“The thieves also took away silver from the Shivling and the snake idol”

Ancient idols of gods under serious threat in Nepal (Nepal)
(26 December 2016; My Republica)
Including allegations that the Royal family were involved in idol smuggling in the past.

Police find new lead on stolen idols from Jumla (Nepal)
(27 December 2016; My Republica)
A conch shell related to the massive idol theft has been located in Kathmandu

Art world embroiled in series of forgery scandals (South Korea)
(27 December 2016; Korea Times)
Two interesting fakes cases, both leave us to question who, exactly, gets to decide what is authentic. Apparently not the artist.

Turning Iraq history to rubble, leaving mess to looters (Iraq)
(31 December 2016; Detroit News)
There are, understandably, no guards at Nimrud.

After Islamic State institutionalized looting in Syria, the market for fake antiquities is booming (Syria)
(31 December 2016; The Los Angeles Times)
Fakes are being made, but to say a market for fakes seems a wilful misunderstanding of what is going on.

China Bans Its Ivory Trade, Moving Against Elephant Poaching (China)
(30 December 2016; The New York Times)
“The decision by China follows years of growing international and domestic pressure and gives wildlife protection advocates hope that the threatened extinction of certain elephant populations in Africa can be averted.”