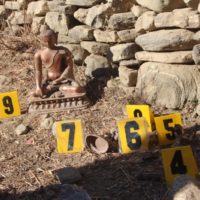 Hot this week: Just about back in the new year!

Can you spot the counterfeit painting?
(4 January 2017; WWLP)
Provenance and physical examination.

Thieves get bright idea to steal six priceless Islamic lanterns from Cairo’s Al Refai mosque (Egypt)
(2 January 2017; Albawaba)
“The lamps date to 1910, and are made of glass decorated with a Quranic verse”

Theft of Roger Maris memorabilia from mall remains a mystery (USA)
(3 January 2007; The Daily Journal)
The items stolen from the Roger Maris museum are still missing.

$3,000 painting stolen from apartment building lobby (USA)
(3 January 2017; WOWT)
The piece was stolen from the lobby of the Hotel Flatiron in Omaha.

Forged painting backdrop for Stamford gallery opening (USA)
(4 January 2017; Fairfield Citizen)
“At some point in the history of that painting,” Brophy said, ”most likely a dealer changed the attribution and basically misrepresented the painting.”

Notre Dame sued over alleged stolen art (USA)
(5 January 2017; South Bend Tribune)
“We do not believe a true owner of this valuable art would do nothing for 20 years about the theft of art allegedly worth $1/2 million,” university attorneys wrote

Officials grateful for resolution of rare San Angelo art theft (USA)
(5 January 2017; Standard-Times)
‘The painting “Young bronc on a cold day,” which was on loan from the San Angelo Museum of Fine Arts’ was taken.

Louvre attendance falls as tourists stay away from Paris (France)
(5 January 2017; The Art Newspaper)
A drop of about 2 million visitors is being blamed on the Paris attacks.

Thousands of pounds worth of damage caused to ancient church (UK)
(2 January 2017; Tamworth Herald)
Windows and a glass door were smashed in this Norman church.

British Library returns book stolen by the Nazis to its rightful owner (UK)
(6 January 2017; Evening Standard)
“A copy of a 1913 German play was originally owned by a Jewish art collector murdered by the Nazis”

Morley artist devastated by theft of canvases (Australia)
(4 January 2017; Community News)
The two paintings were stolen from Galleria Art Studio as they were drying.

The Couple Who Saved China’s Ancient Architectural Treasures Before They Were Lost Foreve (China)
(1 January 2017; Smithsonian)
An article about the work of Lin Huiyin and Liang Sicheng

Khajuraho to get back ‘Parrot Lady’ (India, Canada)
(3 January 2017; Deccan Chronicle)
The piece was trafficked to Canada in 2011, returned to India, and is now headed home.

Meet the Indian art enthusiasts who are using Facebook to bring home stolen antiquities (India)
(3 January 2017; The Economic Times)
“The volunteers, who are all passionate about Indian art, go through old catalogues from auction houses, using any blemishes or imperfections to match lots with idols stolen from temples.”

Bringing the gods home (Nepal)
(3 January 2017; The Kathmandu Post)
Documentation is key to the protection of Nepal’s at-risk sacred art.

14 Chandannath idols recovered (Nepal)
(4 January 2017; The Kathmandu Post)
The stolen idols were found dumped near a stream in the forest.

Police looking for Jumla’s stolen idols arrest other criminals (Nepal)
(7 January 2017; My Republica)
Although those responsible for the idol theft have not been caught, related investigations have turned up all sorts of surprising sorts.

Restitution of Persepolis Collection Expected (Iran, USA)
(4 January 2017; Financial Tribute)
The pieces were loaned to the Oriental Institute of Chicago in 1937