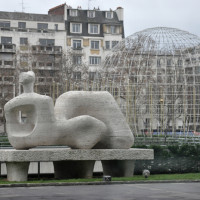 Hot this week: Assassination in an art gallery.

Do Not Touch: What happens when museum visitors ignore the signs
(19 December 2016; The Age)
The negative results of folks not following basic museum rules.

Stolen relief of Queen Hatshepsut recovered from London (Egypt, UK)
(20 December 2016; Ahram Online)
“The limestone relief was stolen from Luxor and smuggled out of the country in 1975 “

Customs officials can’t tell antiquities from crafts they seize (Nigeria)
(21 December 2016; Daily Trust)
In an interesting twist, the agents are are accused of seizing non-antiquities when they shouldn’t and that is said to be anti-tourist.

Getting art back that was stolen by the Nazis has a share of success stories, but sometimes it’s too late for the rightful owner to appreciate (Canada)
(20 December 2016; National Post)
Max Stern died before much of his stolen art was returned. Still looking for more.

6 antique long rifles stolen from Bedford County museum (USA)
(19 December 2016; TribLive)
The pieces were taken from the Old Bedford Village gunsmith shop. They were taken during a rather narrow window.

Illinois Woman Legal Owner Of Apollo 11 Moon Rock Bag, Not NASA: (USA)
(19 December 2016; Tech Times)
Although the piece was sold at government auction by mistake, a court has ruled that the woman who bought it was the legal owner.

ICE On Trail of Stolen Relics (USA)
(20 December 2016; NBC)
I fear this article overstates the number of dedicated ICE agents focused on antiquities but as you do.

This Wiyot Tool Dug Up 86 Years Ago by a Notorious Grave Robber is Being Sold in an Online Auction (USA)
(21 December 2016; Lost Coast Outpost)
“Stuart was the biggest amateur plunderer in the region” meaning Humboldt Bay area, California.

Police look for couple after $22,000 pitcher stolen (USA)
(22 December 2016; ABC United States)
The piece was stolen from Golden and Associates Antiques and is either 18th or 19th century.

Web of smugglers linked to New York art gallery (USA, India)
(24 December 2016; The Hindu)
“This will have an impact as the museums and collectors will now know that the Feds will come knocking at their doors anytime”

Northwest Tribes Know Exactly How They Want To Return The Ancient One To Earth (USA)
(20 December 2016; NW News Network)
Armand Minthorn of the Umatilla on the return of Kennewick Man/Ancient One.

German Panel Rules That a Rare Violin Was Looted by Nazis (Germany)
(9 December 2016; The New York Times)
This is the first time that the Limbach commission has ruled on the return/compensation for a musical instrument.

Four suspected antiquities thieves nabbed near Mesolongi (Greece)
(19 December 2016; eKathimerini)
They were arrested on suspicion that the equipment in their possession was for antiquities looting. Coins, swords, and other weapons were seized from their homes.

Stolen Conor McGregor painting may have been spotted on a bus, after a man ‘showed it to the whole upper deck’ (Ireland)
(19 December 2016; Irish Independent)
It isn’t exactly a subtle piece but bus get-away wouldn’t be my top art heist choice.

Artist floored by the theft of victorious McGregor print (Ireland)
(20 December 2016; The Herald)
The piece, based on an original by by Niall O’Loughlin., was taken from the Balla Ban Art Gallery.

Stolen Old Master paintings head back to Verona (Italy, Ukraine)
(21 December 2016; The Art Newspaper)
The stolen Castelvecchio pieces are in Italy, back from Ukraine.

Italy plans new art crime law after Ukraine recovers stolen masterpieces (Italy, Ukraine)
(22 December 2016; Euronews)
‘There will be different types of crimes relating to the destruction and damage of cultural heritage. Then there will be a new stand-alone crime of the theft of cultural property’

A Master Work, the Ghent Altarpiece, Reawakens Stroke by Stroke (Netherlands)
(19 December 2016; The New York Times)
The many, many times stolen Ghent Altarpiece is looking smart after a restoration.

After Van Gogh Museum Declares Book of Artist’s Sketches to be Fake, Publisher Threatens Legal Action (Netherlands)
(20 December 2016; Art Forum)
The owners of the disputed sketches accuse the museum of an ‘insidious and unfounded campaign’ in a move that proves that the sketches can’t speak for themselves.

El ‘saqueo’ de las momias guanches (The looting of the Guanche mummies; Spain)
(19 December 2016; RTVC)
The Canary Island mummies have been taken and have ended up in museums around the world.

Leeds Castle bolsters defences with ‘crime-fighting liquid (UK)
(20 December 2016; Kent News)
“SmartWater” solution. Okay. Not quite sure this is a ‘defence’.

London church to be reunited with stolen 16th-century carving (UK, Belgium)
(21 December 2016; The Guardian)
An art specialist in Brussels bought the piece in good faith and has returned it after being informed that it was stolen from St Katharine Cree church in London

Thieves steal hood from historic Shackleton exhibition (UK)
(24 December 2016; The Packet)
The hood was stolen from an exhibition in The National Maritime Museum, Falmouth.

The medal detective (UK)
(21 December 2016; BBC News)
Major Zachariah Fike has dedicated himself to reuniting soldiers with their lost or stolen medals.

Five arrested after war medals were ‘stolen’ from home in Blandford (UK)
(22 December 2016; Bournemouth Echo)
Six WWI and WWII medals were taken that belonged to the homeowner’s father.

Waiouru medal thief recalled to prison after starting online escort service (New Zealand)
(20 December 2016; Stuff.co.nz)
A man ‘infamous for his involvement in the $5 million medal heist from the National Army Museum’ has just been recalled to prison for running an escort website.

Antique dealer left ‘devastated’ after $20,000 art theft (New Zealand)
(23 December 2016; Radio New Zealand)
The piece “Punakaiki, West Coast” by John Perry has been stolen in Auckland right before it was due to be sold.

The ghost of Vaman Ghiya is rising (India, UK)
(24 September 2016; DNA)
Remembering a past case of illicit Indian antiquities dealings in the wake of recent arrests

Two criminals held for damaging Jain Tirthankar’s idol (India)
(18 December 2016; The Times of India)
The idol was found in pieces near the temple. This may have been an idol theft gone wrong.

Pratyangira idol and two other artefacts back in India (India, Australia)
(26 December 2016; The Times of India)
The three idols have come back from the National Art Gallery of Australia after having been found to have been looted and smuggled.

Chun Kyung-ja’s long-disputed artwork declared genuine (South Korea)
(19 December 2016; The Korea Herald)
‘Prosecutors announced Monday that “Beautiful Woman” was painted by the late Korean artist Chun Kyung-ja, ending a 25-year controversy over the authenticity of the work which the artist had denied creating.’

Iraq seizes manuscript worth millions stolen in Kuwait (Iraq, Kuwait)
(23 December 2016; Kuwait News Agency)
The manuscript bears the stamp of the Kuwait Museum, seemingly indicating it was taken during the 1990 occupation.

Russian ambassador to Turkey shot dead in Ankara art gallery (Turkey, Russia)
(20 December 2016; The Guardian)
Andrei Karlov was killed at an art exhibition ‘by a police officer who shouted “Don’t forget Aleppo” as he pulled the trigger’.

The One That Waddled Away: Retracing a Weighty Gold Theft (USA, Canada)
(4 December 2016; The New York Times)
A man yoinked a 86 pound bucket of gold scraps from an armoured vehicle and walked off with it.